During my first year as Cornell’s president, I did a modern version of A.D. White’s 1868 Grand Tour. Rather than seeking books, laboratory equipment, teaching models, and professors for a new university, as White did, I wanted to introduce myself and my priorities to Cornellians in key cities in the U.S. and abroad and to learn more about Cornell’s worldwide alumni body, now a quarter-million strong.

Boston was my first port of call, followed by Chicago. In both cities alumni joined Vice President Fred Van Sickle and me to explore themes from my inaugural address, including “education with verve,” the importance of being a distinguished and distinctive university, and the civic responsibilities that universities like ours must carry out.

In Washington, D.C., more than 1,300 alumni and friends joined us at the National Museum of African American History and Culture. Several Cornellians were pivotal in the museum’s creation, and items on display included heirlooms donated by alumni families and pieces on loan from Cornell’s Hip Hop Collection. Throughout the evening, faculty experts were on hand to discuss the various exhibits. The event was a wonderful celebration of the museum and of the University’s founding principles of diversity and inclusion.

The new year brought me to India. Fred and I met with a large group of Cornellians in Mumbai. Some of them have since joined together to form a Cornell Club of Mumbai, augmenting the eighty U.S. and thirty international clubs we currently have. There was a similarly enthusiastic group to greet us in London, where a club has been active for many years.

During the spring semester, several academic deans joined the Grand Tour, adding their perspectives to our conversations with alumni. At our event in Philadelphia, held during the annual Cornell Alumni Leadership Conference, Lance Collins, dean of the College of Engineering, joined me to talk about many topics, including how Cornell fosters a culture of engagement by encouraging students to become involved with our community, and how our alumni can remain engaged with Cornell. 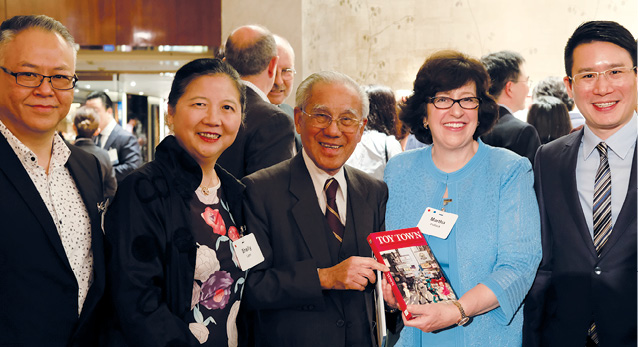 In Florida, I visited both Sarasota and West Palm Beach. Law Dean Eduardo Peñalver ’94 and I devoted some time to exploring free speech rights, a hot topic on university campuses, and one that the Cornell Law School and my office brought to the wider community this year with the Free Speech Lecture Series.

Computing and Information Sciences Dean Greg Morrisett and I joined alumni during the Cornell Silicon Valley annual conference for a discussion that included Cornell Tech and the great potential we now have for the entire University to think and act more seamlessly as “one Cornell.” In Los Angeles, College of Agriculture and Life Sciences Dean Kathryn Boor ’80 and I explored sustainability, an area in which her college has a strong interest, as both a university-wide academic endeavor and a framework for campus operations.

In New York City, already a hub of alumni and academic activity, Bob Harrison ’76, chair of the Board of Trustees, and I talked to a full house about topics ranging from the impact of artificial intelligence on what and how we teach to the record number of applications for freshman admission we received this year. Finally, in Seoul and Hong Kong, Dean of Arts & Sciences Gretchen Ritter ’83 and I highlighted the importance of the arts and humanities in a technologically complex world.

I didn’t return from my Grand Tour with the books, teaching aids, and faculty that were so important to A.D. White. But after meeting more than 4,000 alumni, I did bring back something equally valuable: a strong sense of why you are so devoted to the University, and how we can work together to keep Cornell moving forward.