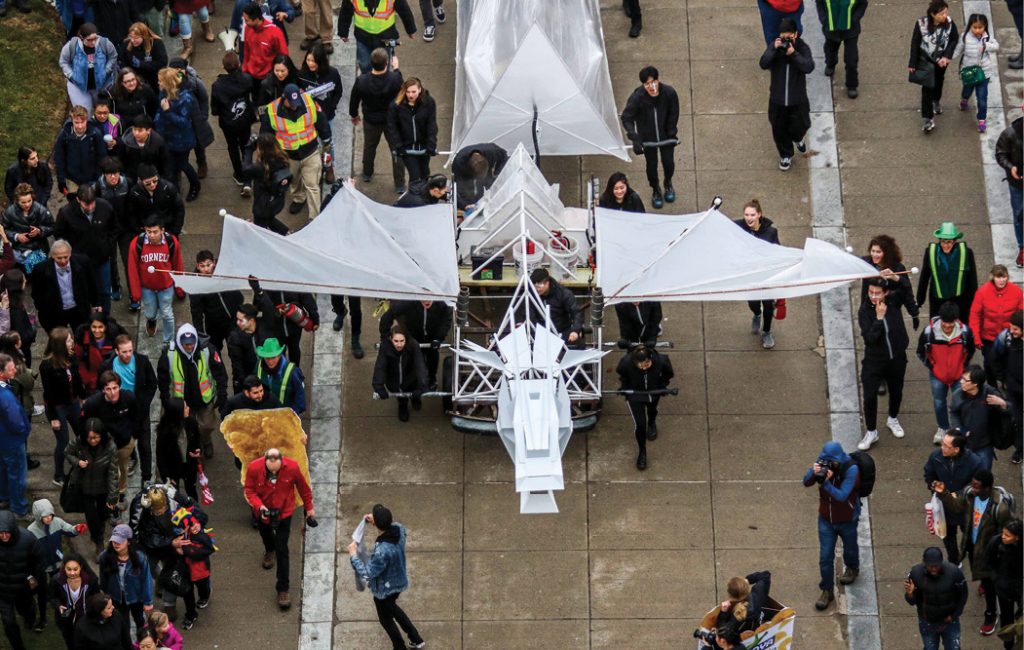 Just weeks after the deadly school shooting in Parkland, Florida, escalated fears of on-campus violence, people on the Hill and in the Ithaca community were alarmed to learn that a Cornellian had been arrested following the discovery of an arms cache in his Collegetown apartment. According to the Ithaca Police Department, twenty-year-old Maximilien Reynolds ’19 (right)—a CALS student who was on leave from the University but still living nearby—was in possession of an AR-15 rifle, a homemade silencer, bombmaking materials, a bulletproof vest, medical trauma supplies, a gas mask, food rations, fireworks, and “a myriad of ammunition to various firearms.” The New Jersey native faces federal charges for possession of a destructive device and a silencer, as well as aiding and abetting the straw purchase of a rifle.

Reynolds’s arrest—which came following a tip from a Walmart employee who was alarmed by some of his purchases—made national headlines. As the Sun and other media outlets have reported, his attorney, Raymond Schlather, JD ’76, has said that Reynolds has a history of mental illness and that paranoia may have driven him to stockpile weapons to defend himself against a perceived threat. Reynolds voluntarily entered a local psychiatric treatment facility after his arrest and was later taken into custody by federal marshals and arraigned in court in Syracuse, where a judge ordered an evaluation of his competency. In mid-March, Schlather notified the court that Reynolds would mount an insanity defense.

‘Disciplinary action resulting from responsible engagement in nonviolent protest will not jeopardize admission to Cornell.’

In response to numerous allegations of sexual misconduct and harassment by superstar architect Richard Meier ’56, BArch ‘57, the College of Architecture, Art, and Planning has declined a gift from him to name the chair of the Department of Architecture. “Although he has apologized, the reported behavior is unacceptable,” Dean Kent Kleinman said in a statement, adding that the college “will swiftly explore what additional actions are appropriate with regard to endowments for professorships and scholarships previously donated to Cornell.” Meier, one of the college’s most prominent alumni, is a past winner of the Pritzker Prize, architecture’s top honor. His firm designed L.A.’s Getty Center and Cornell’s Weill Hall, among many other projects.

That President Martha Pollack got a model of the Cassini spacecraft as an inauguration gift? 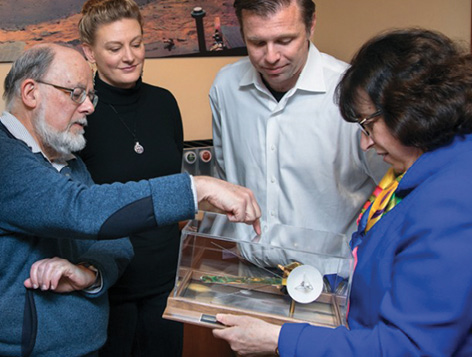 The present came from the Cornell Center for Astrophysics and Planetary Science, the Department of Astronomy, and the Spacecraft Planetary Image Facility in February to commemorate the University’s three decades of participation in the mission. 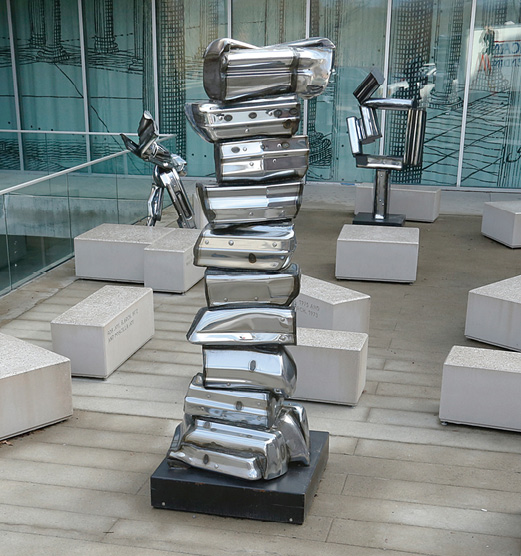 Three sculptures by the late art professor Jason Seley ’40 have been installed in the plaza behind Sibley Hall. The works—Bookstack, Tsura, and My Square—had been bequeathed to Cornell in 1983. Seley, who often worked with repurposed chrome bumpers from vintage cars, also created the Herakles in Ithaka statue outside the Statler.

Mice who become obese lose nearly 25 percent of their taste buds—possibly encouraging them to eat more, since they’re not getting as much sensory feedback from food. Professor Robin Dando calls this “a potential human mechanism for getting fat.”

Information science professor René Kizilcec and colleagues from MIT and Facebook have found that social networks have caused an increase in gift-giving by making people aware of occasions such as birthdays and allowing for easy online purchases of gift cards and other presents.

If greenhouse gas emissions aren’t reduced, rising temperatures will lead to steep declines in the ocean’s fishery yields 200 years from now—and that trend could last at least a millennium, researchers from Cornell and UC Irvine report in the journal Science.

Medical College researchers working in a mouse model have found that eating too much salt reduces blood flow to the brain and causes dementia. Neurology professor Costantino Iadecola says that the mice “developed dementia even when blood pressure did not rise. This was surprising since, in humans, the deleterious effects of salt on cognition were attributed to hypertension.” 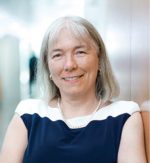 Researchers at the Medical College and on the Ithaca campus will work together to study why health outcomes vary among demographic groups. Launched with a symposium in New York City in March, the new Cornell Center for Health Equity will explore the causes of health disparities—particularly concerning heart disease, stroke, and cancer—among minority communities. Collaborating with local organizations and providers in the city and upstate, it will study such factors as policy, societal biases, socioeconomic status, and educational attainment, with the goal of finding ways to eliminate the differences in outcomes. “Despite extraordinary medical advances in recent decades,” says Monika Safford, MD ’86 (right), the center’s co-director, “what medicine has not done is close the gap in giving care to underrepresented communities, so the disparities continue.”

Chai and Chat, a dialogue series developed by the student-run South Asian Council to promote inclusivity, winner of Cornell’s Perkins Prize for Interracial and Intercultural Peace and Harmony.

Ecology and evolutionary biology professor Robert Reed, whose paper on the genetics of butterfly wing color and iridescence beat more than 3,200 others to win the National Academy of Sciences’ Cozzarelli Prize, which honors scientific excellence and originality.

Oculi, an installation by four faculty members in architecture and engineering that won the City of Dreams design competition. The work, a pavilion crafted from reused grain silos, will be temporarily installed on New York City’s Governors Island starting this summer. 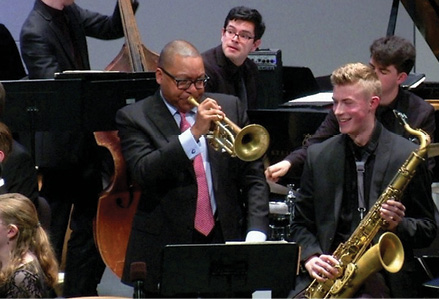 Celebrated musician Wynton Marsalis, an A.D. White Professor-at-Large, spent a week on campus this semester. He performed with students at a concert in Bailey Hall, dropped in on classes and rehearsals, and worked with local schoolchildren.

If the Shoe Fits…

Cornell’s century-old Farrier Program marked what milestone in 2018?
(Use your mouse to reveal the correct answer.)

B) Joining the UK’s Worshipful Company of Farriers

Trustees have set undergraduate tuition for 2018–19 at $54,584 in the endowed colleges (and for out-of-state students in the statutory colleges) and $36,564 for New York state residents in the statutory colleges. That’s a 3.75 percent increase over this year—though, the University says, “after expenditures on undergraduate financial aid, this will result in a net 2.6 percent increase.” Room and board costs were set at $8,842 (for double-occupancy) and $5,924 (for the full meal plan).

New Home for ILR in NYC

Cornell will be a major tenant in a landmark New York City office building as the ILR school moves its Manhattan headquarters there and Weill Cornell Medicine also rents space. As of January, the Art Deco skyscraper at 570 Lexington Avenue in Midtown will house ILR’s offices and conference center in about 39,000 square feet on the eleventh and twelfth floors—including an event space, classrooms, a café, and meeting rooms. WCM’s graduate programs will occupy about 31,000 square feet on the ninth and tenth floors. 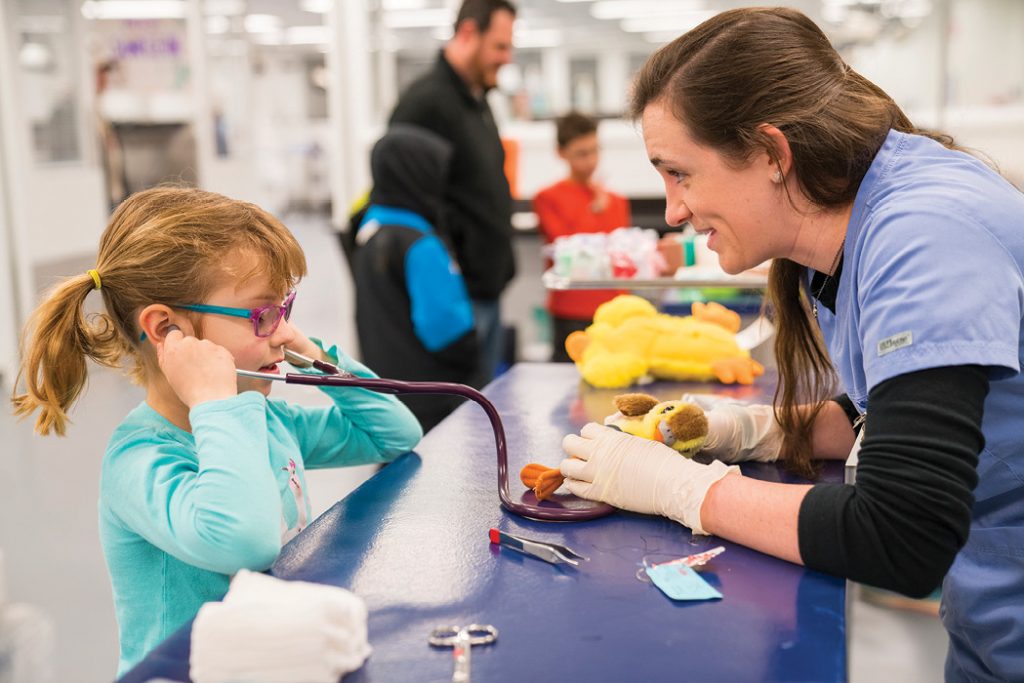 A potential merger of the ILR school and the College of Human Ecology is among the ideas in a report from a faculty committee charged with positioning the University for optimal success in the social sciences over the next ten to fifteen years. The committee, the report explained, was asked to address “the fundamental concern that Cornell’s social sciences are less than the sum of the parts” and to identify “ways to better connect faculty, to better provide faculty with the support that they need, and to improve our external visibility and recruiting power.” Members were urged to think broadly without worrying about how their proposals might be implemented.

Other ideas in the report, released in March, include founding a center for social sciences to link researchers from across campus; establishing a structure to organize and promote health-related scholarship; restructuring social science graduate fields; and creating a college of social sciences. The University is currently seeking feedback, and forums are being held on campus this semester. “We’re in listening mode now,” says committee co-chair Ted O’Donoghue, senior associate dean for social science in the College of Arts and Sciences, “and we want to make sure people engage with the full range of ideas.”

‘The archive means the show can continue to live for people, as long as the Cornell library is around.’

— Caroline Kerr ’75, treasurer of Friends of Bound for Glory, on digitizing eighty performances of the folk music program, which has broadcast from campus for more than half a century

Wolford to Be Vice Provost

Sociology professor Wendy Wolford (right) has been named vice provost for international affairs. Her responsibilities will include overseeing the Office of Global Learning and the Mario Einaudi Center for International Studies, as well as the development of the Cornell China Center, opening in Beijing by spring 2019. A Fulbright scholar who holds a PhD in geography from Berkeley, Wolford does research in such areas as international development and land use. Her appointment runs through 2021–22.