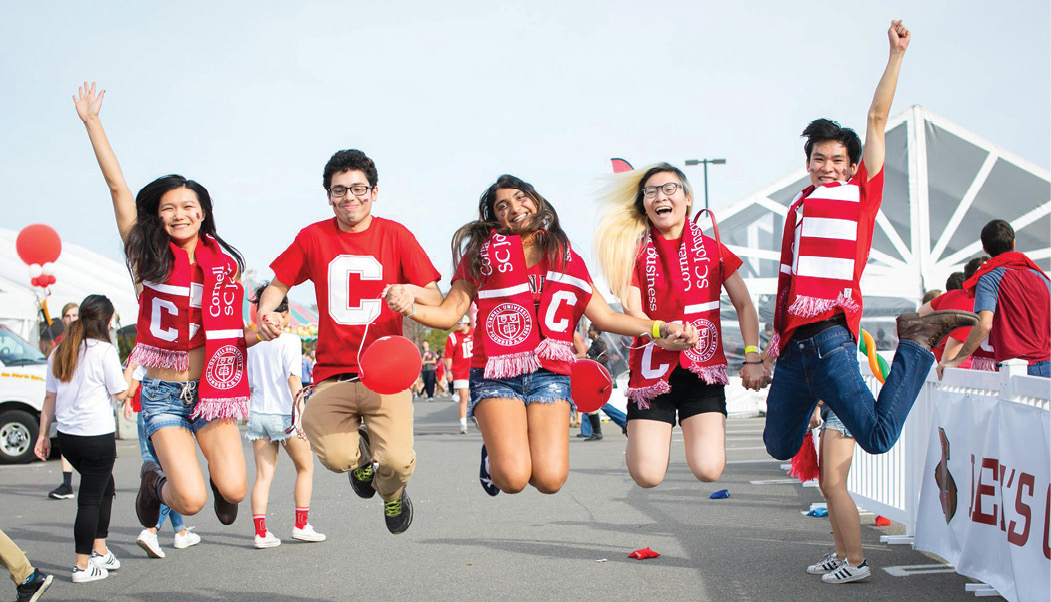 ROOT FOR THE HOME TEAM: The Homecoming weekend festivities in late October included a Big Red Fan Festival in the Crescent lot (where giveaways included Johnson School scarves), a laser light and fireworks show, and a 34-7 gridiron victory over Brown.Photo: Cornell Alumni Association

The fall semester got off to a rough start, with a series of racially charged incidents roiling campus. “I will not tell you ‘this is not who we are,’ as the events of the past few weeks belie that,” President Martha Pollack said in mid-September. “But it is absolutely not who we want to be.” Earlier in the month, someone at the Zeta Psi fraternity house allegedly chanted, “Let’s build a wall around the [Latino Living Center]”—a reference to President Trump’s proposed border wall. In a separate incident the following week, a late-night argument in Collegetown escalated into a fight in which racial slurs were allegedly hurled at an African American student; John Greenwood ’20 has been charged with assault and aggravated harassment and may face hate crime charges. Then, in late October, anti-Semitic flyers appeared on campus—including on the base of the Arts Quad’s Ezra statue—promoting an apparently non-existent white supremacist group.

The Collegetown fight reportedly involved members of Psi Upsilon fraternity, which had its recognition temporarily revoked in spring 2016 for violations of the University’s code of conduct. The September incident prompted the University to announce that it would not consider reinstating the fraternity; its national board of governors later decided that it would close the chapter and that its house would be made available to student organizations dedicated to promoting diversity and inclusion.

In late September, Provost Michael Kotlikoff and Ryan Lombardi, vice president for student and campus life, announced a series of measures that Cornell will take in response to the racial incidents. They include establishing a task force to propose new approaches for diversifying the faculty; hiring additional, diverse clinical staff to University counseling services; and adding new diversity programming to next fall’s student orientation.

The endowment returned 12.5 percent for the fiscal year ending June 30, and its value of $6.8 billion is its highest ever. As the University noted in its announcement, the past year was a transitional one for investment office staff, “as they implemented significant changes to portfolio strategy and management and moved to New York City.”

U.S. News and World Report’s annual ranking of best national universities has rated Cornell fourteenth in a four-way tie with Brown, Rice, and Vanderbilt—rising one spot from last year. In the subject rankings, Cornell had two programs in the top ten: business (seventh) and engineering (tenth). It also made the top ten in seven engineering specialties, among other ratings. 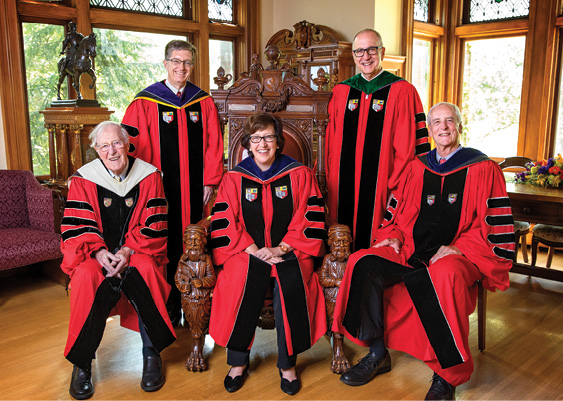 Martha Pollack with the other four living presidents.

In the academic procession. 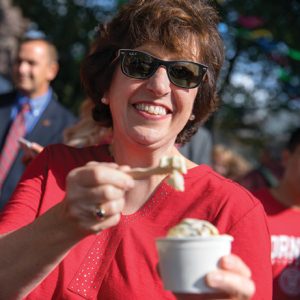 HAIL TO THE CHIEF: In late August, Cornell inaugurated its fourteenth president with a two-day celebration that included a student research showcase, an investiture ceremony on the Arts Quad, and a “street fair” featuring University departments, performance groups, and more. 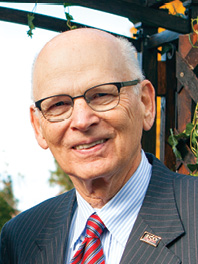 Cornellians are mourning the passing of Peter Meinig ’61, BME ’62 (right), who joined the Board of Trustees in 1991 and served as chair from 2002–11. A retired business executive, Meinig died September 25 in Colorado at age seventy-eight. He is survived by his wife, Nancy Schlegel Meinig ’62; three daughters, including trustee Anne Meinig Smalling ’87 and Kathryn Meinig Geib, MBA ’93; and eight grandchildren, including Sami Smalling ’20. The Meinig family are longtime University benefactors, supporting such programs as the Meinig School of Biomedical Engineering and the Meinig Family National Scholars Program.

A team led by horticulture professor Nina Bassuk ’74 has analyzed more than 100 soil samples at the National Mall, in an effort to help the National Park Service develop a plan for tree preservation by understanding the environmental impact of large-scale tourism.

Cornell scientists have proved that single “master” genes—one for stripes, another for color and iridescence—control the patterns of butterfly wings. It was previously thought that dozens or even hundreds of genes were involved in determining the diverse array of patterns.

Science and engineering PhD students are losing interest in academic careers, finds Dyson professor Michael Roach. Although 80 percent of those surveyed matriculated with an interest in academia, one-third had changed their minds by graduation.

Analyzing more than 800 student surveys, ILR researchers have found that for undergrads, heavy drinking six times a month has a detrimental effect on future employment: it cuts the chances that a new grad will get a job by 10 percent.

The School of Hotel Administration, ranked top in the world for hospitality and hotel management by CEOWORLD magazine for the second year in a row.

Journalist, historian, and photographer Gordon Sander ’72, BA ’73, knighted by Finland for his work on the nation and its history.

A woman who forged transcripts and recommendation letters to get into Cornell has pleaded guilty to student loan fraud in federal court. Cavya Chandra had been denied admission to the Class of 2013; after enrolling at Carnegie Mellon (to which she had provided a forged recommendation) she reapplied as a transfer—falsely claiming a 4.0 GPA—and was accepted. Her misdeeds came to light when she applied to medical school, and she was expelled. She then used forged transcripts to gain admission to an Indiana university, though her degree was rescinded. The plea agreement for Chandra, who has not yet been sentenced, includes a requirement to repay more than $70,000 in financial aid to Cornell.

A self-described “nerd with a passion for cooking,” former Google and Facebook software engineer Joshua Redstone ’93 raised more than $110,000 on Kickstarter—and garnered headlines in publications like Forbes and the Boston Globe—for what product?

An Ithaca resident has been found guilty in the stabbing of a nineteen-year-old Ithaca College student who died after a late-night fight outside Olin Hall in August 2016. After his first trial ended in a hung jury, Nagee Green was convicted of the second-degree murder of Anthony Nazaire during a retrial held in September. Sentencing is scheduled for November.

Eight members of Beta Theta Pi fraternity bounced their way to a Guinness World Record when they jumped inside an inflatable castle on the Arts Quad for fifty continuous hours in early September. The feat—which has not yet been officially acknowledged on the Guinness website—allegedly beat the previous world record for “longest marathon on a bouncy castle (team)” by more than six hours.

RIBBON CUTTING: The Cornell Tech campus on Roosevelt Island was dedicated in mid-September, in a ceremony that featured New York Governor Andrew Cuomo, former New York City mayor Michael Bloomberg (fifth from right), and current mayor Bill de Blasio (third from left), among other dignitaries. “In academic terms, Cornell Tech has been created in record time—from vision to reality in just a few short years,” said President Pollack (center). “In another way, Cornell Tech has been a long time in the making—building on a century of Cornell teaching, research, patient care, and service to New York City and tracing back to our land-grant roots.” For a photo tour of the new campus, see page 46.

A new podcast series by Arts and Sciences faculty offers brief audio essays on various aspects of human nature. Entitled “What Makes Us Human,” it has covered such topics as the limitations of the word “love,” combatting prejudice against people with disabilities, and the future of interactions between robots and people. According to Dean Gretchen Ritter ’83, the podcast is intended to “spark curiosity, exploration, and a deeper understanding of what makes us who we are, as well as what we could be.” It’s available for download on iTunes and SoundCloud and for streaming at: as.cornell.edu/humanities.

‘We all had the sense that we were doing something very important . . . and that weighed heavily on us, but inspired us.’

OPEN FOR BUSINESS: The Johnson School has made a major expansion into Collegetown with the Breazzano Family Center for Business Education. The 76,000-square-foot, six-story building—located on the block of Dryden Road that was formerly home to the Royal Palm Tavern—is named for trustee David Breazzano, MBA ’80, whose $25 million gift supported the project.

Saddened by the closing of the Wings Over Ithaca restaurant in East Hill Plaza, four alumni—Dan Leyva ’14, Kevin Mok ’14, Raunak Nirmal ’14, and Mike Wang ’07—have not only reopened it in Collegetown, they’ve purchased the entire national franchise. The popular fast-casual eatery closed in October 2016 after its owner was charged with multiple felonies, including grand larceny and tax fraud. Launched near the University of Massachusetts, the “Wings Over” franchise has forty restaurants in thirteen states; the new owners hope to expand to more than a hundred over the next three years.

A new undergraduate program links Ithaca’s College of Arts and Sciences with Cornell Tech. The Milstein Program in Technology and Humanity will enroll twenty-five students per year; in addition to pursuing their undergrad majors, they’ll have a specialized computer science curriculum and will spend summers being exposed to the New York City tech sector through internships and other activities. According to President Pollack, the program—funded by a $20 million gift from the Milstein family—“will provide not only a foundation for students to develop the technical, intellectual, and organizational skills they need to drive progress in the digital age, but also a context and ethical framework that will equip them to shape society for the better.”