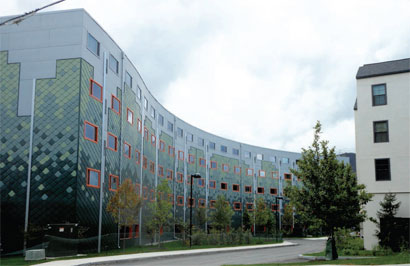 The construction by a private developer of a large apartment complex geared toward the grad student market is transforming a neighborhood at the southern end of Collegetown. Dubbed Collegetown Terrace, the sixteen-acre site comprises a dozen new buildings with about 1,000 beds on East State Street, South Quarry Street, and Valentine Place. The project—whose modern, multicolored façade has altered the character of a swath of East State Street—required the demolition of more than two dozen houses, drawing the ire of some local preservationists. (The parcel includes the historic Williams House, home to a founder of Ithaca College; the work included its restoration.) Now partly occupied, Collegetown Terrace features such amenities as a glass-walled fitness center and underground parking; the entire project is slated for completion in the summer of 2014. The apartments range from studios to three-bedroom units.

Arts Library Gets an Overhaul

The Fine Arts Library in the College of Architecture, Art, and Planning will be renovated and expanded, thanks to a $6 million gift from an alumna. “Most images found within this collection are not readily available on the Internet,” notes the donor, California-based architect Mui Ho ’62, BArch ’66, “and students, researchers, and teachers need to use these books intensely.” The project—a research center with 250,000 volumes, study spaces, and digital resources—is set for completion in 2017. “It will be a light-filled, twenty-first-century library, glowing from behind the large industrial windows of Rand Hall,” says Dean Kent Kleinman. “A perfect metaphor for conserving the old while erecting the new.” . 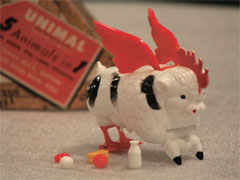 Among the many creations of famed ag professor Howard Babcock was the “Unimal,” a beast that promoted animal products by combining a cow, steer, pig, lamb, and chicken. After his death in 1950, a toy version—dispensing tiny plastic models of meat and dairy foods—was sold. The Unimal is currently on display at the History Center in Tompkins County as part of its “Curiosities” exhibit, running through October 26. Other Cornell-related items include evidence from a notorious 1919 murder case in which Donald Fether ’19 was charged—but never convicted—in the death of a local girl during an outing on Cayuga Lake.

The widow of one of the leading figures in the history of electronic music—synthesizer pioneer Robert Moog, PhD ’65—has donated his archive to the University Library. It includes such materials as schematics, prototypes, letters, notes, and recordings. The announcement last summer sparked controversy among some Moog fans, who had hoped the materials would go to the Bob Moog Foundation in Asheville, North Carolina; his widow, Ileana Grams-Moog, cited Cornell’s conservation expertise in giving the collection to the University. Once the archive arrives on campus and is organized, it will be open to all.

Six Cornellians will receive the University’s highest honor for volunteerism, the Frank H. T. Rhodes Exemplary Alumni Service Award. It recognizes a lifetime of volunteer leadership to Cornell; recipients must have graduated at least thirty-five years ago. This year’s honorees are Ann Schmeltz Bowers ’59, Ruth Zimmerman Bleyler ’62, Samuel Fleming ’62, Bob Huret ’65, Ronay Arlt Menschel ’64, and Alan Rosenthal ’59. The awards, given by the Cornell Alumni Association, will be presented during Homecoming.

Nobel laureate Ken Wilson died in June from complications of lymphoma. He was seventy-seven. A physics professor at Cornell from 1963 to 1987, Wilson won the Nobel in 1982 for groundbreaking work on phase transitions, such as the change from a liquid to a gaseous state. “Ken Wilson was one of a very small number of physicists who changed the way we all think, not just about specific phenomena, but about a vast range of different phenomena,” says fellow physics laureate Steven Weinberg ’54, a professor at the University of Texas, Austin. Wilson’s survivors include his brother, David, a professor of molecular biology at Cornell. 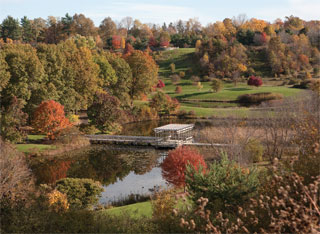 Visitors to the Plantations can learn about the features of the 150-acre Newman Arboretum via a new self-guided smartphone tour. By scanning QR codes at sixteen stations, visitors can access two-minute audio clips as well as photos and written information. Those with “dumb” phones can call a number and key in a code to hear the audio clips; topics include the sculpture garden, Flat Rock, the Newman Overlook, and the collections of maples, lilacs, and dogwoods. The recordings, whose scripts were written by students, are designed to be appreciated in any order. “Two minutes seemed the perfect amount of time,” says Plantations interpretation coordinator Sarah Fiorello ’98. “It’s short and sweet.”

It’s hard to believe that less than two years ago Cornell NYC Tech didn’t even exist. On December 19, 2011, New York City Mayor Michael Bloomberg selected Cornell and our academic partner—Technion–Israel Institute of Technology—as the winner of the city’s applied sciences campus competition. We have been working nonstop since then to create innovative academic programs and plan a sustainable campus in the heart of New York City. And we’ve made enormous progress in both areas. 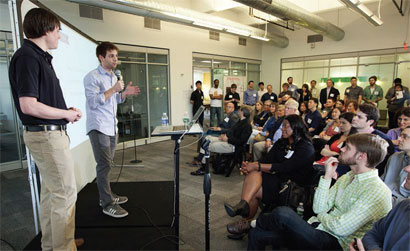 Cornell Tech is designed to address two significant challenges slowing innovation and economic development in New York and around the country. The first is that the growth of the tech sector is being held back by a shortage of top-level tech talent. The second, broader challenge is that the way we innovate and commercialize research ideas in this country is changing, and universities and companies both need to adapt to remain at the forefront of technology innovation. It is time for new thinking about how industry and academia work together. Cornell Tech will be at the forefront with new models for graduate tech education, research, and commercialization.

We’re off to a flying start. Just over a year after winning the competition, Cornell Tech welcomed its first Master of Engineering in Computer Science students (our “beta class”) in January 2013 to a temporary campus in space donated by Google in its Chelsea headquarters. For the fall semester, we will have approximately twenty master’s students on campus, plus about ten PhD students. We have been hiring world-class faculty from around the country— computer science pioneer Deborah Estrin was our first hire— and by fall we will have six permanent faculty on board.

Recently, we announced two new degrees that will launch in the fall of 2014: a one-year Johnson School MBA at Cornell Tech that fuses business, technology, innovation, and entrepreneurship; and a groundbreaking two-year dual degree with the Technion in connective media. The dual degree will be offered by the Joan and Irwin Jacobs Technion–Cornell Innovation Institute (JTCII), named in honor of a $133 million gift from Joan Klein Jacobs ’54 and Irwin Jacobs ’54, BEE ’56; students will earn both a Technion and a Cornell degree. This program combines information technologies with social and media studies, and it will be part of a broader program in applied information-based sciences in one of our three “hubs” focused around leading New York City industries: Connective Media, Healthier Life, and the Built Environment.

Planning for the permanent campus is moving forward at a rapid pace. We are on track to break ground in early 2014 and open our doors on Roosevelt Island in 2017. We have finalized a master plan that will shape the evolution of the campus over the many years of planned development. In addition, we completed the New York City public review process for the campus in the spring, and have been grateful for the overwhelming support throughout the city for our vision and campus plans. Our future home on Roosevelt Island will be an innovative, sustainable campus made up of a combination of academic space, corporate co-location facilities, an executive education center and hotel, housing for students and employees, and more than two acres of publicly accessible open space. Overall, the fully built-out campus will comprise more than two million square feet of new space located in a series of architecturally dynamic buildings. For the signature first academic building, being designed by Pritzker Prize-winning architect Thom Mayne of Morphosis, we are aspiring to achieve “net-zero” energy usage over time. We have also partnered with Forest City Ratner Companies, the developer of the Barclays Center in Brooklyn, to build the first corporate co-location building, with design by innovative architectural firm WEISS/MANFREDI. Many other worldclass designers are also engaged, including Skidmore, Owings & Merrill for the campus plan and Field Operations (designer of New York City’s popular High Line) for the landscaping.

This has been an extremely exciting time, not just for Cornell Tech but for the entire Cornell community. We look forward to providing more updates about our progress in future issues of Cornell Alumni Magazine.

For more on the progress of Cornell Tech, go to: www.tech.cornell.edu.