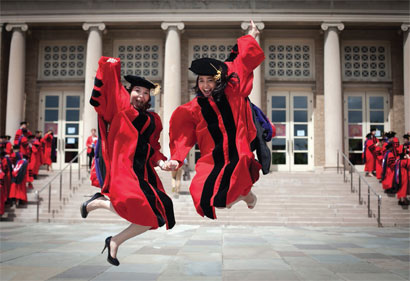 Thirty-six hundred undergraduates received their degrees at Cornell’s 145th Commencement in May—along with 1,700 master’s and doctoral candidates, 276 future lawyers, 513 MBAs, and eighty-nine veterinarians. President David Skorton addressed graduates in Schoellkopf Stadium under sunny skies, albeit with a brisk, Ithaca-esque chill in the air. “As Cornell graduates, you bring formidable talents, experiences, and intellect to whatever you set out to do,” he told them. “Now you need to match that with optimism, focus, and effort.”

The previous day, more than 11,500 people attended the Convocation address, given by Newark, New Jersey, mayor Cory Booker. Booker, an up-and-coming politician who declared his candidacy for the U.S. Senate shortly after his visit to campus, talked about his unconventional methods to advocate for Newark, including a hunger strike to raise awareness of inner-city crime and a high-profile war of words with Conan O’Brien after the TV host disparaged his city. “Your generation will be determined by how you come together as lovers—lovers of peace, lovers of justice,” Booker said. “The fires that must be burning are the fires of love and justice, the fires of our hearts and our compassion, the little fires of individual actions that every day add up to an inferno of change.”

After disappearing during a Senior Week camping trip on the shores of Cayuga Lake, a member of the Class of ’13 is presumed dead. Twenty-two-year-old Christopher Dennis had gone canoeing alone at night; his boat was found overturned on the lake the following day. Hundreds of volunteers from campus and beyond searched the area for days afterward, finding no sign of Dennis. President Skorton noted his absence during Commencement—as has become tradition, the ceremony featured an empty chair to symbolize classmates lost during students’ time on the Hill—and the family held a service of remembrance at Taughannock Falls State Park that Monday, Memorial Day. A CALS student and Ithaca native, Dennis was part of an extended Cornellian family that included his grandparents, parents, and older brother, Oscar-nominated war documentarian Danfung Dennis ’04.

Cornellians also mourned the loss of two other students at the semester’s end: Zachary Wilson, twenty-three, an undergraduate on leave, and Kyle Wecker, thirty, a grad student in electrical and computer engineering. Both died in Ithaca of undisclosed causes.

The “Cornell Now!” fundraising campaign has topped $4 billion, the University announced in late April—noting that it’s only the fourth time an institution of higher learning has achieved that milestone. Publicly launched in 2006, the campaign has a goal of $4.75 billion by the University’s sesquicentennial in 2015. So far, the effort—which includes the Medical College’s $1.3 billion “Discoveries that Make a Difference” campaign—has received more than 617,000 gifts from some 155,000 alumni, parents, and friends. Says President Skorton: “Beginning with Ezra Cornell’s founding gift in 1865, philanthropy has been the bedrock of the University, and gifts of all amounts continue to sustain and advance every part of this university’s mission.”

The temporary fencing that was put up on seven campus bridges following a series of student suicides in spring 2010 is coming down—restoring much-beloved views of Ithaca’s gorges. After a lengthy design and discussion process in which the Cornell community struggled to balance safety and aesthetics, the University installed steel mesh nets under six of the bridges; the seventh, the Suspension Bridge, will be wrapped in a mesh “sock.” All the bridges will have a system of security cameras, allowing Cornell Police to respond to disturbances. The work is expected to be completed by August 1.

In May the University broke ground on Klarman Hall, a new building to be connected to the back of Goldwin Smith on the east end of the Arts Quad. Named for benefactors Seth Klarman ’79 and his wife, Beth, the $61 million project is the first new humanities building on central campus since 1905. Designed by the Boston-based architects behind the new Physical Sciences Building across East Avenue, it will feature 33,250 square feet of space including a large glass atrium, offices, classrooms, a 350-seat auditorium, and a café. With sustainable elements including a green roof, it’s expected to receive LEED Platinum status. 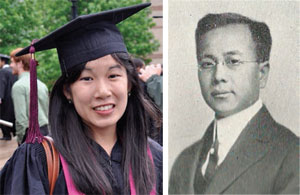 Centennial celebration: At Commencement, Olivia Lee ’13 received a degree from the College of Human Ecology—100 years after her great-grandfather, Kung Sam Lee from Canton, China, graduated with a degree in civil engineering.

The chair of computer science at Rutgers has been named Cornell’s dean of Computing and Information Science. Haym Hirsh succeeds Dan Huttenlocher—now founding dean of Cornell Tech—in leading the college-level unit, which comprises three departments and more than eighty affiliated faculty. Hirsh holds an undergrad degree from UCLA and a PhD from Stanford; his résumé includes the directorship of the NSF’s Division of Information and Intelligent Systems.

Another fraternity has been suspended for alleged hazing violations. As of mid-April, Phi Kappa Psi was placed on interim suspension following “credible allegations of serious hazing,” the University announced. A fraternity on such status cannot engage in any activity other than its residential operations. 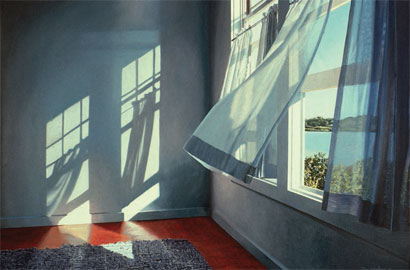 Room With a View: Serenity for Margie is among the dramatic Ithaca-area scenes on display at the Johnson Museum in an exhibit of paintings and drawings by Alice Dalton Brown ’62. The show, entitled “Summer Breeze,” runs through mid-August.

New A. D. White Professors Include Expert on Cheetahs

Qualcomm founding chairman and CEO emeritus Irwin Jacobs ’54 and his wife, Joan Klein Jacobs ’54, have given $133 million to endow an institute at Cornell Tech. The Joan and Irwin Jacobs Technion-Cornell Innovation Institute is a joint effort between the University and the Technion–Israel Institute of Technology. It will offer two-year dual master’s degree programs on the New York City campus, to be located on Roosevelt Island. Longtime philanthropists, the Jacobses have given numerous major gifts to both institutions. At Cornell, they have endowed fellowships, scholarships, and a professorship in the Engineering college. They were elected Presidential Councilors in 2005.

Law Dean to Step Down

Law School dean Stewart Schwab has announced that he’ll step down in June 2014. On the faculty since 1983, Schwab assumed the deanship in 2004, serving two terms. During his tenure, the school launched its first major renovation project in twenty-five years, marked the most successful fundraising year in its history (2012), and expanded its business law curriculum, among other accomplishments. Schwab will return to the faculty after a one-year sabbatical. A national search for his successor is under way. 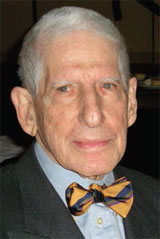 Cornell lost one of its most dedicated alumni—and CAM one of its most loyal friends—when S. Miller Harris ’43 passed away in June at age ninety-one. His death, at home in Spinnerstown, Pennsylvania, came during his class’s 70th Reunion—an event he’d helped organize but was unable to attend due to ill health. A longtime garment industry executive, Harris oversaw several dress shirt companies, including Eagle Shirtmakers and Gant; at the time of his death he was still active with Spinnerstown Shuttle, the firm he’d founded three decades earlier after one of several failed attempts at retirement.

An English major on the Hill, Harris was an aspiring journalist who served as editor-in-chief of the Daily Sun. (As he once recalled, with typical candor: “I worked my ass off for that paper.”) After service in World War II, he turned down an ill-paying instructorship in English at Cornell to join the family shirt business. Among his favorite pastimes was cooking, an avocation he took to with relish in the early Eighties. Harris wrote the Class of ’43 column in CAM on and off for more than sixty years; he became class president in 2004, a post he held until his death. His devotion earned him the Bill Vanneman ’31 Outstanding Class Leader Award, one of Cornell’s highest honors for alumni service. He is survived by his wife of more than seventy years, Mary Louise Snellenburg Harris ’45, four children, nine grandchildren, and two great-grandchildren.