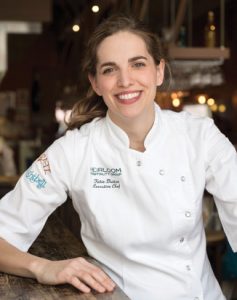 It’s a Friday night in Asheville, a booming tourist town in the mountains of western North Carolina, and every seat is filled at Cúrate (pronounced, as a sign on the window explains, “coo-rah-tay”). The tapas bar crowd is a mix of regulars stopping by for a Spanish lager and some jamón, other locals celebrating special occasions or just the end of the workweek, and out-of-towners drawn by the national press about Cúrate’s executive chef and co-owner, Katie Button ’05. Named a Food & Wine Best New Chef in 2015, Button is working Cúrate’s open kitchen, ponytail swinging as she checks out plates of patatas bravas; later in the evening, she’ll duck around the corner to Nightbell, a restaurant and cocktail lounge that’s styled like a speakeasy and serves her spin on American cuisine.

The pace of Button’s night matches that of her culinary career, which has taken her from her very first kitchen job to recognition by the food world in less than ten years. And this fall, she took another leap with the publication of her first cookbook, Cúrate: Authentic Spanish Food from an American Kitchen, released by Flatiron Books in mid-October. The publisher recruited Button after an editor ate at Cúrate and swooned for her authentic but highly personal and seasonal expression of Spanish flavors, rendered with precision and balance. Year round, the menu offers classics like tortilla, an egg and potato dish that resembles an Italian frittata—but Button also marks each summer with a watermelon salad featuring corn nuts (yes, like the gas-station snack). Her many Spanish customers can eat their fill of fritter-like croquetas and feel at home, and Americans can ease into the country’s cuisine with the familiarity of the meatballs known as albóndigas, a Cúrate specialty celebrated in countless Yelp reviews.

Professional food writers have also been impressed: this year, Time Out named Cúrate the number-two Spanish restaurant in the U.S., behind only é by José Andrés, which is run by the celebrity chef who is Button’s longtime mentor. Travel & Leisure called Cúrate one of the best farm-to-table restaurants in the country, raving that “experiencing Chef Button’s Spanish tapas creations—like cod and potato purée, sautéed shrimp and sliced garlic, and cured ibérico ham—is akin to that feeling you get when watching the fog lift off North Carolina’s Blue Ridge Mountains. It’s a heavenly moment shared between you and the great outdoors, or in this case, the great food.” 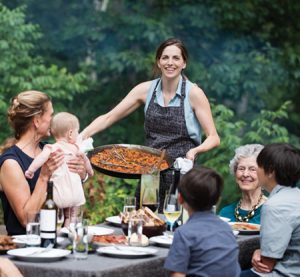 Button’s new cookbook is her invitation to amateur chefs to recreate that moment themselves. The book provides recipes for many of the restaurant’s greatest hits, from gazpacho to flan, but Button has adapted—and in some cases abandoned—the techniques of a professional kitchen so readers can achieve the same flavors at home. At Cúrate, her staff makes a mushroom stock that intensifies the flavor of shiitakes and creminis sautéed in sherry, but the cookbook suggests a shortcut using dried porcinis and a quick boil. Mayonnaise at the restaurant is made with a siphon for maximum fluffiness; Button instructs her readers on how to do it with an electric mixer instead. As she writes in the book’s introduction: “I create and test my recipes and weigh ingredients to the gram; I take temperatures of everything from hot oil to the center of a roast to bubbling caramel; I time confits, measure the diameter of cookies. And then, I let it all go and share a delicious meal with friends and family. And you can, too.”

It’s hard to believe that less than a decade ago, Button—who majored in chemical and biomolecular engineering on the Hill—was wrapping up a master’s degree in biomedical engineering in Paris, applying to PhD programs in neuroscience, and wondering why she was so unhappy with her professional path. Exploring the city’s food shops and cooking with the ingredients she discovered “were my enjoyment in life,” Button recalls. She wound up withdrawing from her PhD program at the National Institutes of Health two weeks before she was supposed to start, and began thinking about how to pay for the apartment she had rented in Washington, DC.

Button, who grew up helping her mother with a catering business, had always been drawn to the restaurant world. (“When I was at Cornell, I was so jealous of my friends in the Hotel school,” she recalls.) So she went through the Zagat guide and dropped off resumes at all the top-rated spots in D.C. What followed was an education in the Ivy League of the restaurant world. Through her first job as a server at Andrés’s Café Atlántico Minibar, she met her future husband, who invited her to join him when he went to Spain the next year to work as service manager at elBulli, a Michelin three-star restaurant repeatedly named the best in the world.

From the beginning, Button aimed to move from waiting tables to working in the kitchen. Ferran Adrià, the elBulli chef, told her to go get some experience. She returned after stints at New York’s Jean-Georges and L.A.’s The Bazaar, another Andrés restaurant, and spent about six months cooking at elBulli. When she and her husband eventually landed in Asheville in January 2010, they realized that there was nothing in the city that offered the kind of tapas bar experience they’d enjoyed when they were off-duty from elBulli. In March 2011 they opened Cúrate—whose name means “cure yourself”—with a traditional Spanish small-plates menu. By May, it had gotten a mention in a GQ piece about Asheville, with Southern Living taking note of the restaurant later that year. More national press quickly followed. There hasn’t been a slow night since. 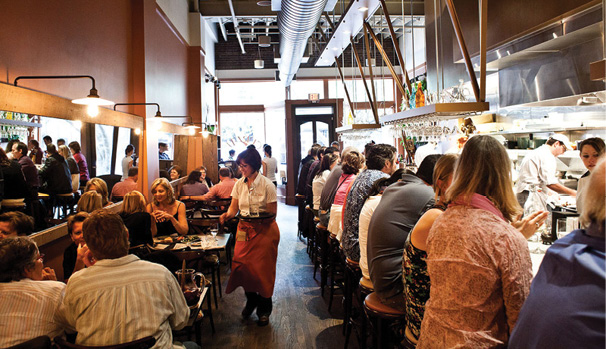 Button credits the rapid success and growth of her family’s restaurant business in part to lessons from both her culinary experience and her scientific education. In the kitchens where she trained, she analyzed the strategies that made them successful, and she has put those lessons into action at Cúrate and Nightbell, which opened in 2014. “Structure and organization have always been important to me, and that’s why science was also a potential career,” she explains. “The systems behind the scenes of a restaurant are what make it work.” Button has also applied that perspective to principles like the reduction of waste, a hot issue among chefs concerned about food insecurity in the U.S. At her restaurants, she has set up recycling and composting programs that complement a commitment to using ingredients that would normally be thrown out, like leftover bread crusts and the whey from making ricotta cheese that appear in one of her dishes: turnips served in a garlic-fenugreek whey sauce topped with toasted crumbs. “Thinking about waste is an ethical issue, but it also makes business sense, and it helps me and our whole team to be more careful about what we’re doing,” she says. “Cooking thoughtfully means cooking better.”

Earlier this year, Button joined a group of chefs at the James Beard Boot Camp for Policy Change to discuss food waste and related issues, and she’s often on the road these days for events across the country. She has no intention of leaving Asheville, though, with its food-loving populace and its wide range of neighboring farms that can supply the local ingredients Button prefers, like the pasture-raised beef she uses in her nose-to-tail butchering program at Nightbell. In fact, Button is doubling down with an expansion of Cúrate that will add seats as well as wood-fired grills for even more authentic Spanish dishes like the roasted eggplant, red pepper, and onion tapas known as escalivada. At Nightbell, she’s continuing to experiment with cooking that bridges Appalachia and Andalusia, offering such dishes as short ribs infused with Spanish flavors like sherry and orange. “I feel like we’re all just the sum of our past experiences,” she says, “and so is our food.”