The politics of disgust

David Pizarro: The word comes from "bad taste." So when things taste gross we spit them out, and we're disgusted by things that likely would have made us sick in our ancestral environment. Some people have pointed out that disgust might also keep us away from people or groups that have different customs regarding cleanliness, food, or sex. They refer to disgust as a "pathogen-avoidance reflex."

CAM: Did you go into this research with any particular goal in mind?

DP: We were out to document the facts, not to attack liberals or conservatives. But a lot of people assume that there was some sort of liberal agenda. And I chuckle to myself, because not only was I not trying to find this relationship between disgust and political beliefs, I avoided it even when I did find it.

CAM: Why avoid it?

DP: Partly, I just wasn't interested. I've always avoided the political area of psychology. I've felt that trying to study it would be like listening to a shouting match between Red Sox and Yankees fans.

CAM: So how did you get into it?

DP: Sort of by accident. I've been interested in emotion and moral judgment, how we determine right from wrong, and recently researchers have been finding that disgust is heavily implicated in judgment. So we did large-scale data collections where we asked people about certain moral judgments, and we included a disgust-sensitivity questionnaire that other researchers had developed.

CAM: How does a questionnaire measure disgust?

DP: It asks a series of hypothetical questions like, "Imagine you walk into a public restroom and the toilet is unflushed. On a scale of one to five, how disgusted would you be?" Another could be, "Imagine you took a sip of soda and realized that it wasn't yours—it was a stranger's." Or, "How willing would you be to eat a piece of chocolate that's made to look like feces?" 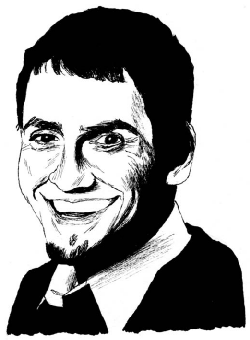 CAM: If you were so put off by politics, how did that enter into the study?

DP: Peter Ditto, the psychology professor I was working with at U.C. Irvine, was interested in political orientation, so I inserted questions about how liberal or conservative you are. And every time I'd get the data back I'd see this relationship—the more likely you were to report being conservative, the higher you'd score on the sensitivity scale. When I arrived at Cornell, one of the grad students [Yoel Inbar, PhD '08] said, "This is really interesting—we can't keep ignoring it." So he started doing follow-up studies investigating what exactly about liberalism or conservatism was being predicted. We started looking at specific kinds of political judgments and that's when we found that disgust was really predicting "family values" beliefs on issues like gay marriage and abortion. We found there's a strong correlation for those things, but no link with issues like economics or foreign policy.

DP: I think so. Gay marriage and abortion were always reliably associated with disgust sensitivity, and in some other data collections we've found it for stem-cell research and human cloning. What this is predicting is the "family values" brand of conservatism that has emerged fairly recently in our country.

CAM: What's going on? What do you think accounts for the connection?

DP: At this point it's just speculation, but I think that conservatives in this country did a good job of picking issues that could get at the gut. A lot of people—even liberals—report gut reactions against the notion of homosexual contact. The question is what do you do with it. I'm a heterosexual man, and I often have a negative reaction when I see two men kissing. But I say to myself, "Whatever—I get grossed out by a lot of things that have nothing to do with how I value people as individuals." I think the difference is that liberals reject that as input into real judgment. But conservatives would say that if you're disgusted at the thought of human cloning, then maybe you should take that into account when you decide whether to clone humans. It could be that people who have higher disgust reactions are just more willing to listen to them.

CAM: Do you think this is immutable, or can people change how disgusted they feel about certain things? For example, society's view of gay marriage has evolved dramatically.

DP: That's a good question, and the answer is that we don't know. For instance, is it like a medical student who has to dissect human cadavers? Suppose that originally he's disgusted by it, but eventually it's nothing. Is he still disgusted by the feces in the public restroom? Is it domain-specific? We don't know, and I'll use myself as an example. I'm very disgust sensitive; I can't even look at some of the stuff in our stud-

ies. I don't think my sensitivity has changed, but what has changed is when I'm willing to use disgust as informative. I was raised in a religious environment, and in high school I was appalled by the idea of homosexuality. I matured intellectually and my opinions changed radically, but I don't think my disgust changed.

CAM: Since you published your two papers on the subject, what kind of reaction have you gotten?

DP: I was struck by how differently liberals and conservatives interpret the findings. I personally think that disgust shouldn't influence my moral judgment, but it's a perfectly reasonable thing for someone to believe. The fact that we found this relationship shouldn't upset conservatives as much as it seems to; they think our research calls them irrational. On the other hand, you've got a lot of liberals saying, "I knew conservatives were dumb." The amount of Google hits on this research is ridiculous. The sociology of it all strikes me as interesting.

CAM: You could do a study on the reaction to the study.

DP: It's crossed my mind.