Cornellians Respond to the Devastation in Japan

On March 11, an 8.9-magnitude earthquake hit northeast Japan and unleashed a devastating tsunami, leading to mass destruction and killing thousands. While contributions poured in from all over the world, many Cornell alumni helped to provide relief. 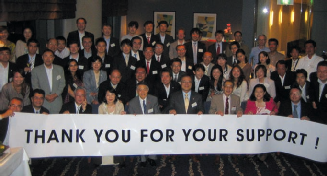 In May, the Cornell Club of Japan held a relief fund drive. The event, at the Grand Arc Hanzomon Hotel, was organized by club president and incoming University trustee Chiaki Tanuma, MPS '80. More than sixty alumni gathered to discuss the importance of working together to support the relief effort. Upwards of $12,000 was raised by the event and a matching gift from the Cornell Club of Japan. The proceeds were sent to Ashinaga Ikueikai, an organization offering educational and nutritional support to children who lost their families in the disaster.

Individual Cornell alumni are contributing in their own ways. They include Rose Tanasugarn '90, BA '95, vice president of the Cornell Club of Japan and member of the CACO Board, who plans to run the Kobe Marathon to raise funds for disaster relief, and Mark Tanouye '90, a professional musician in Hawaii who has participated in several multi-million-dollar fundraisers.

The members of the Cornell Club of Japan wish to express their gratitude and "thank all our Cornell friends all over the world who have been praying for us and supporting us," Tanuma says.

In May, a hundred Cornell-ians, family, and friends gathered for the Cornell Club of Washington's annual dinner, where the club honored its volunteers. Past president Carol Epstein '61 presented the Bondareff Award to Tomoko Morinaga, MPS '89. The award, named for Esther Schiff Bondareff '37 and her late husband, Daniel Bondareff '35, goes to a member who has given outstanding service to the club. In addition, Lindsay Schattenstein '10, BS '09, and Liz Mannis '11, BS '10, won the best program award for their young alumni holiday party.

Meet the CAA Board

Position: Director from the Region—Southeast

First Cornell volunteer experience: I first became involved as a board member of the Cornell Club of Puerto Rico.

Current alumni activities: I am still involved in the Cornell Club of Puerto Rico. I also serve as the CAAAN chair for Puerto Rico (I hold the freshman send-off at my house) and on the CAAAN Advisory Council; I am on the Cornell University Council and serve as vice chair of its Committee on Admissions and Financial Aid.

Favorite professor: I have two: Joe Thomas (former dean of the Johnson School) and Linda Nozick (civil engineering). Both are outstanding teachers and incredible human beings.

More profiles of CAA board members will appear in future issues.

CAAAN Has A Big Red Year

As the number of applications for the Class of 2015 hit a new high, the Cornell Alumni Admissions Ambassador Network (CAAAN) also saw record participation. More than 4,700 alumni from around the world filed more than 19,000 reports detailing meetings with applicants during the 2010-11 admissions period—the greatest number of reports volunteers have ever submitted—while hundreds more staffed college fairs and special events. "The dedication of alumni to meeting with potential Cornellians is awe-inspiring," says Bruce Wagner '64, MEE '66, chair of the CAAAN Advisory Committee. "No matter how many applicants we get, our volunteers make the time to meet them." Wagner reminds those who are interested in taking part in CAAAN, especially young alumni, to sign up now, as the new admissions cycle is getting started. For more information, or to become a CAAAN ambassador, go to caaan.admissions.cornell.edu.

From time to time, the Cornell Alumni Association will pay tribute to alumni volunteers whom we have recently lost, via short essays written by the people who worked with—and were inspired by—them.

One of Cornell's most passionate and dedicated alumni, Bob was actively involved in many activities, both on campus and on Long Island. He was on the boards of the Cornell Club of Long Island and the CALS Alumni Association of Long Island, in addition to his longtime role as a CAAAN committee chair. Bob seemed to do everything. He laid the foundation for the annual bus trip to Cornell for high school seniors from Long Island, personally arranged for yearly Book Awards for local high school seniors, and helped plan the CALS Alumni Association summer wine tasting events on the East End. Last fall, although he was already quite ill, he arranged to have Cornell's director of athletics, Andy Noel, speak to Long Island alumni prior to the Cornell-Columbia football game. Most of Bob's efforts on behalf of Cornell were behind the scenes, as he shunned the spotlight. But he was always willing and able to help out with any Cornell function and he always had the University's best interests at heart. Beginning this fall, the campus pilgrimage for high schoolers will be named the Robert B. Snook II Annual Student Bus Trip in his memory.

I can't tell you how many Cornell alumni leaders have inspired me since I've graduated, but I can tell you who the first one was: Lon Benamy. For us middle class kids from Brooklyn applying to Cornell in the Seventies and Eighties, getting a call from Lon was a sign that you were on your way; traveling to Yeshiva of Flatbush High School (where Lon taught biology) for your Cornell "interview" was an event on the road to acceptance. It seemed that Lon handled all of Brooklyn's applicants single-handedly, and his enthusiasm for Cornell was boundless. "He is the reason I went to Cornell," says Jackie Daniels Saril '88, who was also one of his biology students. "I will never forget when he took me to see the campus. He was driving a stick shift while eating a bagel and drinking from a milk carton—I have no idea how we made it up in one piece." For more than forty years, Lon contributed his time to bringing some of the best and brightest to Cornell. We estimate that during his tenure as an admissions ambassador, he met with at least a thousand applicants and drove thousands of miles to show the campus to potential students. He made an impression on me— and many others—that will last a lifetime.

For Gay Alumni, Another Reason to Be Proud 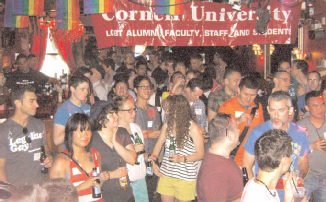 Little did the organizers of the Cornell University Gay and Lesbian Alumni Association's annual New York City gay pride party know that the day and location they chose for their gathering would coincide with a pivotal moment in gay rights history. "We had selected the Stonewall Inn in Greenwich Village not only because of its history, but because it offered us a private party room at a great price," says Emanuel Tsourounis '00, JD '03, a CUGALA board member. It was at the Stonewall Inn in 1969 that a group of drag queens resisted a police raid and rioted, catalyzing the gay rights movement. And it was there, fourteen hours prior to the start of CUGALA's party, that a huge celebration broke out. 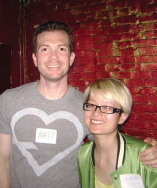 The night before, the Marriage Equality Act had passed the New York State legislature and was quickly signed by Governor Andrew Cuomo, setting off celebrations in the streets outside Stone-wall, with thousands of people partying throughout the night. The video and photos made world news. "When we got there the next day, the camera crews were still there—it was almost as though people were making a pilgrimage—and when our party started, people were trying to get in thinking it was a continuation of the celebration," says Tsourounis. "Alumni came who wanted to be with us, to share the moment and the location." More than 150 alumni and current students, including some from Weill Cornell Medical College, were on hand. "It was amazing to be there," says Olivia Tai '08, BA '10, another organizer who helped to promote the celebration to current students. "We had people RSVP at the last minute because they knew it would be special."

The Cornell University Council and the President's Council of Cornell Women are under new leadership following approvals by their executive committees last spring.

Katrina James '96 has been elected chair of the University Council, succeeding Mitch Lee '90, JD '96. The council also elected five vice chairs: Deborah Gerard Adelman '71, MS '74, Jay Carter '71, ME '72, Scott Pesner '87, Jay Silpe '94, and Annie Wong '77. New members-at-large on the administrative board are Dean Burrell '79, Angela Clark '88, Stanley Fish '72, DVM '75, Andrea Glanz '74, Mary Maxon Grainger '79, MPS '87, Mary Wilensky Kahn '79, Natalie Teich '65, and Jeffrey Weaver '86, MBA '90. The council also elected more than one hundred alumni to four-year terms, including fifty who have never served on it before. They were elected because of their outstanding volunteer leadership, professional standing, and/or commitment to community service. Council members act as ambassadors for the University and serve on advisory committees for Cornell.

The President's Council of Cornell Women also named a new board, electing Julie Crotty '87, JD '96, MBA '96, as president. Jill Goldy, MS '78, and Linda Gadsby '88 were named vice chairs. PCCW works to enhance the involvement of female students, faculty, staff, and alumnae as leaders within Cornell and its many communities.