The Anatomy of Influence by Harold Bloom '51 (Yale)

The Anatomy of Influence by Harold Bloom '51 (Yale) 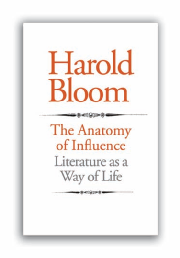 In a summing up of his life's work, the critic and Yale professor returns to the question of literary influence and the importance of Shakespeare in the Western canon. "Literary criticism," writes Bloom, "as I attempt to practice it, is in the first place literary, which is to say personal and passionate. At its strongest it is a kind of wisdom literature, and so a meditation upon life. Yet any distinction between literature and life is misleading. Literature for me is not merely the best part of life: it is itself the form of life."

Reimagining Japan edited by Clay Chandler, Heang Chhor, and Brian Salsberg '95 (Simon & Schuster). In March 2011, Japan suffered the triple disasters of earthquake, tsunami, and nuclear emergency. If the recovery from the 1995 Kobe earthquake is any indication, the country will succeed in rebuilding the Tohoku region. But Japan also faces serious social and economic problems: lackluster growth, persistent deflation, competition from China and South Korea, an aging population, and the highest debt-to-GDP ratio in the developed world. Eighty writers—CEOs, economists, scholars, journalists, and foreign policy experts—address the challenges Japan must face as it tries to renew itself.

God's Arbiters by Susan K. Harris, PhD '77 (Oxford). When the United States freed the Philippines from Spanish rule in 1898, many Americans, including Mark Twain, saw it as a moral victory. Twain began as a "red-hot imperialist," but soon changed his mind. "I have seen that we do not intend to free, but to subjugate the people of the Philippines," Twain said. For Harris, a professor of American literature at the University of Kansas, Twain embodies Americans' conflicting assumptions: "He came to his anti-imperialism only after judging that America was betraying its own principles by forcibly annexing the Philippines."

Demonic by Ann Coulter '84 (Crown Forum). In her latest book, the conservative columnist argues that liberals incite mob behavior by twisting the truth, stirring passions, demonizing opponents, and relying on propagandistic images instead of ideas. She argues that the programs of totalitarian regimes are similar to many of the Democrats' proposals and compares the mob violence of the French Revolution with the actions of liberal Democrats today. "Republicans are the party of peaceful order," Coulter writes. "Democrats are the party of noisy, violent mobs. This nation's heroes knew what Louis XVI did not: a mob cannot be calmly reasoned with; it can only be smashed."

Artisanal Gluten-Free Cupcakes by Kelli Terry Bronski '01 & Peter Bronski '01 (The Experiment). When Peter Bronski was diagnosed with celiac disease in 2007, he switched to a gluten-free diet. He and his wife, Kelli, began developing recipes and blogging about them. "Those of us in the gluten-free community are like everyone else in the sweet-loving world," the Bron-skis write. "We want to bake our cupcake and eat it, too." Their artisanal approach harks back to the way their grandmothers used to bake, and "gives a nod to the pastries of France, the cannoli of Italy, the dulce de leche of Latin America."

Walls Within Walls by Maureen Sherry '85 (HarperCollins). When the Smithfork family moves from Brooklyn to a fancy apartment on Manhattan's Fifth Avenue, the children discover that the previous tenant, Mr. Post, a deceased millionaire, has left clues to a puzzle that may reveal a hidden fortune.

The Blood Lie by Shirley Vernick '83 (Cinco Puntos). Vernick bases her young adult novel on a historical case in Massena, New York, in 1928, when a Jewish family was accused of killing a missing girl as part of a blood sacrifice.

The New and Selected Yuri by Yuri Kageyama '76 (Ishmael Reed). In her collection of new and selected poems, Kageyama debunks cultural stereotypes and explores how racism and sexism scar people.

The Ethics of Sightseeing by Dean MacCan-nell, PhD '68 (California). "Tourism contains keys to understanding recent changes in the ways we frame our humanity," writes MacCannell, a professor emeritus of landscape architecture at UC Davis. While observing a variety of destinations and attractions, he analyzes the unintended consequences of travel and dangers of staged authenticity.

Royal Pains by Leslie Carroll '81 (New American Library). "Dereliction of duty," writes Carroll, "is what this book is all about." In her second foray into royal history, she recounts the "jealousies, lusts, and betrayals" of scandalous nobles, from King John to Ivan the Terrible and Lettice Knollys to Princess Margaret.

Collateral Knowledge by Annelise Riles (Chicago). Riles, director of the Clarke Program in East Asian Law and Culture at Cornell, analyzes the legal reasoning that underpins global financial regulation. "If technicalities are at the core of regulatory practice," she argues, "then they must be understood as political moves, with broad constituencies and consequences."

Solidarity Transformed by Mark S. Anner, PhD '04 (Cornell). During his research on labor unions in Latin America, Anner was imprisoned and interrogated—and even survived a bomb blast. The assistant professor of labor studies and political science at Penn State examines union campaigns in the clothing and auto industries in Argentina, Brazil, El Salvador, and Honduras.

Ordinary Egyptians by Ziad Fahmy (Stanford). An assistant professor of modern Middle East history traces the development of Egyptian national identity and resistance to British authority from the 1870s until the Revolution of 1919 through the lens of popular culture.