Kent Diebolt '82 and his colleagues at Vertical Access use climbing gear to inspect such august structures as cathedrals, the U.S. Capitol, and Philadelphia's Independence Hall

Kent Diebolt '82 and his colleagues at Vertical Access use climbing gear to inspect such august structures as cathedrals, the U.S. Capitol, and Philadelphia's Independence Hall

Kent Diebolt '82 has lost his nerve on the job only once—in 1996, while suspended in a climbing harness from the ceiling of the St. Thomas Church on Manhattan's Fifth Avenue. The ropes holding him aloft were threaded through a small hole in the ceiling of the French High Gothic structure and anchored to a steel beam in the attic. Diebolt had just turned his attention to the object of his study—the terra cotta Gustavino tiles that comprise the vaulted ceiling of the nave—when a fuse blew and he was plunged into darkness. While a colleague raced to reset the power, Diebolt dangled 100 feet above the floor. "All I could see was the pews I'd fall on," he recalls. "Usually, you're so focused on the work, you don't wonder what would happen: if you fell, you'd be dead."

A former contractor and one-time nurseryman, Diebolt founded Vertical Access, based just outside Ithaca in Lansing, in 1995, using industrial rope techniques to conduct surveys of historic buildings and other sites for preservationists, architects, and engineers. Today, the firm employs five full-time climbers using proprietary software the team developed to integrate still and video digital images, quantitative materials analyses, and schematic diagrams. While commonplace in Europe, using climbing gear in the building industry remains relatively rare in the U.S., where most inspectors rely on scaffolding and heavy machinery such as cherry pickers to assess the condition of steeples, gargoyles, and other remote architectural elements. "People call us to get to places they can't get to," says Diebolt, who has scaled the Chrysler Building and Philadelphia's Independence Hall, among others. "But we don't do repairs, caulking, or window washing; there can't ever be a perception that we have a stake in the outcome of a survey." 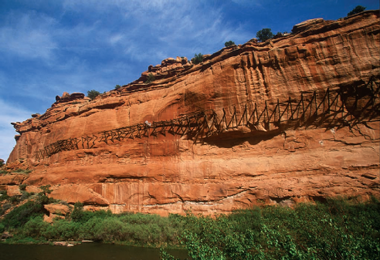 At St. Thomas, the first big contract in New York City that Vertical Access landed, Diebolt and his crew were on a deadline. Next door, the Museum of Modern Art was about to embark on an expansion that required blasting a mere ten feet from the intricate, 100-foot-tall stone carving behind the altar. "They wanted to know whether the church could withstand the vibrations," says structural engineer Robert Silman '56, who hired Vertical Access to survey the church on behalf of his Manhattan firm, Robert Silman Associates. "When we sent Kent up there, he could see daylight through the masonry—it was quite alarming." There wasn't time for repairs before the MOMA construction was slated to begin, but because of Diebolt's report, Silman and the MOMA engineers modified the blasting plans to reduce the risk of damage. "We often wish we were Spider-Man," says Silman. "I'd love to look at a building and be able to say what kind of beams and concrete and wood are inside. Now we have Spider-Man: Vertical Access has a capability the rest of us don't have."

Scaffolds and cherry pickers can hoist engineers within range of the structures they're examining, but the logistics can be a nightmare. Without Vertical Access, says Silman, the St. Thomas inspection would have been prohibitively expensive and disruptive. "A cherry picker in front of St. Thomas might take closing one lane of traffic on Fifth Avenue, maybe two," he says. Interior scaffolding isn't much better. "It's ugly," he says, "and puts the building out of service for weeks at a time." Sometimes, ropes are the only option—as when Vertical Access surveyed Colorado's thirteen-mile-long Hanging Flume, part of a hydraulic mining operation suspended from the walls of the Dolores River canyon, constructed in the 1880s and now on the National Register of Historic Places. When the company inspected the cables of the Arthur Ravenel Bridge, 100 feet above Charleston Harbor in South Carolina, the team designed a system of wire slings on rollerblade wheels to augment their ropes and harnesses. ("It's a challenge to come down the cable in a controlled way and stop when you want to," notes conservator and Vertical Access partner Evan Kopelson '94.) 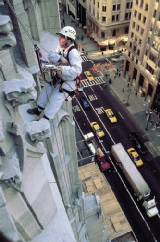 Ropes allow a unique perspective on each structure, says engineer Kelly Nuttall Streeter '97, a partner in Vertical Access since 2002 who taught rock-climbing as an undergraduate instructor with Cornell Outdoor Education. Her inspection of Marble Collegiate Church, in lower Manhattan, revealed the name of the nineteenth-century sawyer who had milled the beams ("McGuire") scratched into a timber in the attic with a nail head. Farther uptown, at the Cathedral of St. John the Divine—which has been under construction since 1892—she found a mallet, forgotten by some long-ago worker on an unfinished structural support. "You find shims that were left in masonry joints," she says. "It's not until the mortar fades away, which is why we're there, that you can see how the stonework was put together." But perhaps her favorite climb was the one she made in spring 2010, on the dome of the U.S. Capitol Building. Says Streeter: "You just feel in awe that you get to be there."

Diebolt has gazed into the face of a gargoyle carved in the likeness of the architect who designed the St. Thomas Church; admired the complex geometry and impeccable workmanship of the Chrysler Building's sheet metal cladding; and marveled at the legacy of Philadelphia's Independence Hall. "It was built by people present at the inception of this country," he says. "Part of the joy of this work is the buildings—they are amazing, iconic structures."