As chief of staff to the president of the September 11 memorial, Allison Bailey Blais '00 has an intimate view of the rebuilding at Ground Zero

As chief of staff to the president of the September 11 memorial, Allison Bailey Blais '00 has an intimate view of the rebuilding at Ground Zero

Allison Bailey Blais '00 was exiting a Manhattan subway station on September 11, 2001, when American Airlines Flight 11 flew overhead. She watched as it passed far too low over Lafayette Street and gasped as it crashed into the North Tower of the World Trade Center. Blais made her way to the roof of the Public Theater, her work-place, from which she witnessed the explosion caused by the second plane. Exactly fifty-seven minutes later, she was still standing on the rooftop, riveted and horrified, when the South Tower collapsed. "I physically collapsed with it," she recalls. "I felt my knees give out."

Back then, Blais dreamed of a career as a Broadway writer; on the Hill, she'd sung with the After Eight a cappella group and performed musical theater. She couldn't have known that someday she'd be immersed in the creation of a lasting memorial to 9/11. But ten years later, she sits in an office on the twentieth floor of One Liberty Plaza, just across the street from Ground Zero. As chief of staff to Joe Daniels, president and CEO of the National September 11 Memorial & Museum, she is dedicated to upholding one of the memorial's stated missions: "Respect this place made sacred through tragic loss."

Located beneath the ongoing construction of One World Trade Center (also known as Freedom Tower), which will be New York's tallest skyscraper at 1,776 feet, the memorial occupies eight of the World Trade Center site's sixteen acres. It is the culmination of a design competition conducted by the Lower Manhattan Development Corporation (LMDC), which was charged with planning and coordinating the rebuilding of the area surrounding Ground Zero.

Out of 5,201 entries from sixty-three countries, eight final-ists were chosen, including one co-designed by Sean Corriel '04 and another by Joseph Karadin, BArch '97, and Hsin-Yi Wu, BArch '97. The winner—Reflecting Absence, by Michael Arad and Peter Walker—features North America's largest manmade waterfalls cascading into two reflecting pools set within the footprints of the Twin Towers. The sound of the water is intended to drown out the city noise, making the site a sanctuary of sorts. The reflecting pools, which symbolize the void left by the attacks, are surrounded by 400 trees whose leaves will turn color in the first weeks of September.

The memorial's scheduled opening—on the tenth anniversary of the attacks—is reserved for family of the victims. General access begins the following day, and it is estimated that five million people will visit the site annually, making it the city's most popular attraction. The museum, scheduled to open a year later, will be housed below the memorial in a seven-story space between bedrock and street level. Visitors will enter through an above-ground pavilion, then wander through narrative and interactive exhibits about the attacks, their context, and their consequences—including, as was announced in early May, one about Osama bin Laden's death. The museum will house a resource center, exhibits honoring first responders, displays of victims' and survivors' personal effects, and artifacts recovered from the site (including the famed "survivors' staircase"). 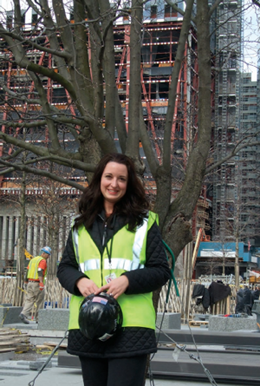 The $530 million project has been a massive undertaking— and Blais has been involved with almost every aspect. She joined the LMDC after earning a master's in American studies from Columbia, opting for a career change as the city's theater industry suffered in the wake of 9/11. She spent two years as a special assistant and project manager before moving into her current position, where she essentially serves as a liaison among Daniels, dozens of staff members in various departments, and what she describes as a "very involved" board of directors. Chaired by Mayor Michael Bloomberg, it includes such members as David Beamer (father of heroic "Let's roll" Flight 93 passenger Todd Beamer), real estate magnate Howard Milstein '73, and TV host Jon Stewart. "My role changes from day to day, whether it's planning a sensitive museum exhibition, an issue with construction, or a PR situation," says Blais, whose husband works for the Port Authority of New York and New Jersey as program manager for construction at the World Trade Center site.

Beyond the forty-eight-member board, there are thousands of individuals and entities—survivors, local residents and businesses, fire and police departments, relatives of those who perished—who are heavily invested in the memorial. "You can't make everyone happy, and that's really tough sometimes—to know that you're disappointing people who feel deeply about what they're advocating," says Blais, who found time to coauthor A Place of Remembrance, the official book of the memorial, published by National Geographic.

In her position, Blais has become acquainted with many of the victims' families, 40 percent of whom haven't received any of their loved ones' remains. "This is like a gravesite for them," she says. "It has to feel like a place where they can go and mourn, not like a tourist site where they're in line with the rest of the people." The names of the 2,976 victims (including those from the Pentagon and the Pennsylvania flight) and the six who died in the 1993 World Trade Center bombing are inscribed in bronze around the perimeters of the memorial pools and will be illuminated at night.

One of Blais's most profound responsibilities was to coordinate contact with each victim's next of kin and ask how they wished the names to be displayed, to verify any company affiliations, and to inquire about meaningful relationships that could affect placement. An algorithm was then developed to process such requests—so, for instance, two friends who worked at Cantor Fitzgerald or two brothers who served in separate fire companies could be listed adjacently. "We have the privilege of knowing these families who so graciously share the lives of their loved ones with us, and everyone feels a deep responsibility to them," says Blais. "Nobody here thinks this is just a job."