My Cornell diploma hangs on a wall in my office. I'm proud to have it there—and especially proud that it bears the small, neat signature of Dale R. Corson. Although it was forty years ago, I still recall vividly the chaotic atmosphere on campus when Corson was named Cornell's eighth president. His predecessor, James Perkins, had been forced from office in the aftermath of the Straight takeover, the faculty was still bitterly divided over the resolution of that crisis, and I, like many of my fellow students, was wondering when—or if—Cornell would return to some semblance of normalcy. 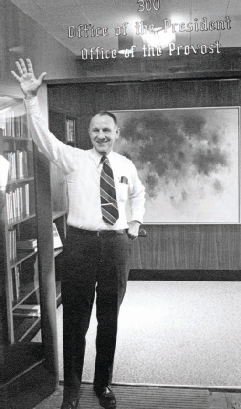 Then Dale Corson took over. He was exactly the right person to be the University's president at that moment, and more than one informed observer has credited him with saving Cornell. I wouldn't dispute that—especially after reviewing a new multimedia package called The Legacy of Dale R. Corson.

The project was the brainchild of J. Robert Cooke, a former dean of the faculty who founded the Internet-First University Press in 2004. It combines a book with video and audio recordings, photographs, and other resources into a comprehensive overview of Corson's life and career. The book is available in print or a PDF version linked to the recordings, so you can see and hear a half-hour discussion about Corson between professors emeriti Walter LaFeber and Mike Abrams; watch Dale Corson: Cornell's Good Fortune, a 1999 documentary by Edward Hershey and David Rose; and listen to Corson give a 2007 talk about campus unrest during the Sixties and Seventies. The PDF and recordings are available online and on a two-disc DVD set; the second disc has a two-hour interview of Corson by a fellow physicist, Professor Emeritus Kurt Gottfried.

Although Dale Corson is humble about his achievements, this package—which will continue to be enhanced and expanded online—documents an extraordinary life story. Born in rural Kansas, Corson rode his pony to a one-room school. After earning a bachelor of arts degree from Emporia College, he went on to graduate school at the University of Kansas and then U.C. Berkeley—where he was a co-discoverer of the element astatine. After receiving his PhD, he launched a teaching career, only to be interrupted by World War II. He was invited to join a research team at MIT, where he played an important role in the development of radar; at the end of the war, he joined the staff of the Los Alamos Scientific Laboratory.

In 1946 Corson came to Cornell to join a physics department that had such stars as Hans Bethe and Richard Feynman. Within ten years, he had become its chairman. In 1959 he was named dean of the College of Engineering and four years later was appointed provost. His rapid rise as an academic leader can be attributed to many factors, not the least of which are his keen intellect and wide-ranging curiosity, but perhaps most of all to the trust he inspires. As you listen to the tributes and read the encomiums in this collection, certain points become clear: Corson is fair and honest and considerate. He listens. He treats everyone with respect, even those who may be angrily confronting him, and he always keeps his word.

When, as Mike Abrams described it, "you could hear the social fabric tearing" at Cornell, Corson acted to restore order and civility. During his time as provost (1963-69) and president (1969-77), he dealt with a series of confrontations and building occupations, all of which were resolved without violence. As John Marcham '50 wrote when Corson stepped down as president, he was "constitutionally unable to slough off a problem"— and he seemed to handle them all masterfully. Cornell would not be the estimable institution it is today without the direction he provided during one of its most difficult periods.

But don't take my word for it. Read Corson's own words and those of his many friends and colleagues. Watch the videos and listen to the interviews. Dale Corson has had a long, productive, and remarkable life, and it is Cornell's good fortune, indeed, that he has spent so much of it here in our midst.