In early 1903, a typhoid epidemic in Ithaca claimed the lives of eighty-two people— including twenty-nine Cornell students—and sickened hundreds of others. In an excerpt from his book The Epidemic: A Collision of Power, Privilege, and Public Health, journalist David DeKok chronicles the University’s response to the outbreak. “President Jacob Gould Schurman found himself in a dilemma that was Homeric in its scope and complexity,” DeKok writes, describing how Schurman coped with a public health issue—and some extremely bad publicity—that threatened Cornell’s future.

When the deadly 1903 typhoid epidemic sparked panic on campus and beyond, President Jacob Gould Schurman scrambled to keep Cornell from closing— maybe for good

In early 1903, a typhoid epidemic struck Ithaca, claiming the lives of eighty-two people—including twenty-nine Cornell students—and sickening hundreds of others. In The Epidemic: A Collision of Power, Privilege, and Public Health (Lyons Press), journalist David DeKok explores the roots of the public health disaster. The main culprits, he writes, were not so much the disease carriers themselves—most likely immigrant laborers building the Six Mile Creek dam, who carried the typhoid bacilli from Italy—as the businessmen who put profits above human lives. 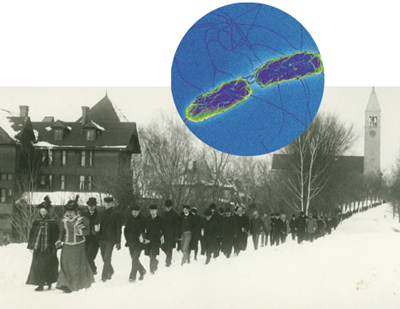 President Jacob Gould Schurman found himself in a dilemma that was Homeric in its scope and complexity. A typhoid epidemic was killing his students. Those still on campus (nearly a third—about a thousand—had fled) were increasingly restive and angry, demanding remedies, such as free artesian water delivered to their boardinghouses, that his Board of Trustees and especially the governing Executive Committee were not willing to provide. The Executive Committee was dominated by friends of William Torrey Morris 1873; in 1901 they had arranged for Cornell University to invest $100,000 in Ithaca Water Works bonds so he could buy the water company. They showed no signs of backing away from him. And what about the fate of the University itself? Each student death was publicized around the country, and Ithaca was portrayed as a pestilential hellhole. Would any parent ever again agree to send his son or daughter to Cornell?

Schurman needed someone to make an intelligent investigation of how the epidemic came to be if he was to craft a way out of this mess. He wanted to know the present condition of the campus water supply, which came from Fall Creek, and how the campus and city supplies might be kept pure in the future. The Cornell president quietly asked Professors Veranus Moore 1887 and Emile Chamot 1891, PhD 1897, to carry out the work, which they did forthwith, returning a week later with a cogent report that examined all realistic sources of the epidemic.

The two professors believed Six Mile Creek was the source of the epidemic and had been contaminated by the Italian workers on the dam. But they admitted that with the workers gone since mid-November there was no way to prove the hypothesis conclusively. "The rocks and woods at and near the edge of the stream are reported to have been thickly sprinkled with human excrement and . . . the stream itself received directly much of their excreta. This condition was witnessed by one of us (Chamot) in the fall. At the time of our visit, February 12th, there was still evidence of such a condition." They received a letter from an Ithaca businessman describing what he saw the previous fall, and collected statements from three Cornell botanists who saw the foul condition of the construction site during plant collecting hikes along Six Mile Creek around the same time.

They warned Schurman that Fall Creek, which provided the campus water supply, also passed through farming territory and was nearly as dirty as Six Mile Creek. Drinking it unfiltered was a disaster waiting to happen. The thing to do, the professors recommended, was to build a filtration plant for the water from one creek or the other, or to draw all water from artesian wells. Schurman released their findings to the public a few days later.