Like plenty of Cornellians before and since, Chris Shea ’87 majored in English and dreamed of writing the great American novel, but ultimately shifted to a different career. Few, however, have taken Shea’s particular path: blacksmith school. Now a metal artist living and working in Maryland, Shea uses an ancient craft to create modern objects like furniture and architectural elements, many of them inspired by the insect world. “I love the sense of history,” Shea says. “A forged item has that feeling of timelessness.” 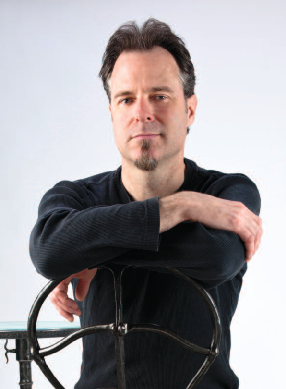 Chris Shea '87 buys his office supplies by the ton. He commutes by walking a few yards from his house in rural Maryland—built in the Thirties with bricks scavenged from a demolished prison—to a workshop in the backyard. Forget a copier and fax machine; Shea uses an anvil, a hammer, and a coal-fired forge whose glowing orange embers hover above 2,000 degrees.

What do you do with a BA in English? If you're Shea, you go to blacksmith's school and become a metal artist. Heavily influenced by the art nouveau movement, Shea creates objects— from sculptures to furniture to candelabras to architectural elements like railings—that meld ancient techniques with modern aesthetics. "I love the sense of history," Shea says, heating a length of steel at his forge. "A forged item has that feeling of timelessness. I don't fight it, and a lot of my designs are take-offs on traditional forms. But what really motivates me is having a vision for something I want to make, and then making it."

Much of Shea's work melds metal and glass, the latter fabricated to his specifications at the Washington Glass School in suburban Maryland. His designs include a "pod-form" dining table with an ovoid base and round glass top; a fish-shaped weather-vane; a rectangular rust-finished coffee table whose glass top is dotted with circular indentations; and a sconce table whose form is reminiscent of the human spine. "Part of the appeal of combining metal and glass is that you get the sense of something rugged and strong, and then this thing that is full of light and possibly ephemeral," Shea says. "There's something poetic about that. And there's something beautiful about the way that the metal is darker and tends to absorb light, and the glass just glows." 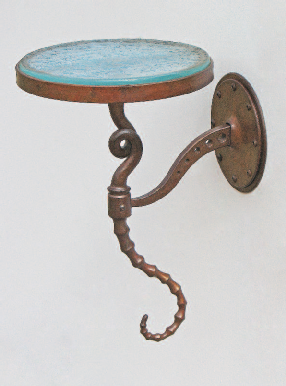 Shea often takes inspiration from the insect world; one of his best-known pieces is a set, comprising an "arthropod side table" and two café chairs, that was recently added to the permanent collection of the Renwick Gallery, the Smithsonian's craft and decorative arts museum. Its legs echo an insect's segmented limbs; the chair backs are reminiscent of a beetle's carapace; the seats and tabletop are made of bluish green glass that seems both ethereal and rock-solid. "I've always loved insects," Shea muses. "I know there is a creepy element to them, but I find them absolutely beautiful and fascinating. Often they have a feeling of something that's built up out of parts, like a lot of my work. The shell structure is a perfect analogy to metal, and the forms I can create in metal seem to lend themselves to insect inspiration." The table and chairs were showcased in the September/October 2011 issue of DC magazine, which ran a full-page photo of Shea and wrote that he "has taken his traditional concepts of craftsmanship and designs rooted in art nouveau and gone a little buggy."

Shea's workshop is located in Brandywine—forty minutes southeast of Washington, D.C.—where he lives with his wife, Dana Trevas, two dogs, and a cat. The space is dominated by a large steel table that does both heavy and light duty; he can weld on it, and he can sketch designs on it with soapstone. In addition to myriad chisels and other tools organized in old coffee cans, the workshop features such equipment as a century-old electric power hammer and the coal-fired forge, whose venting system he built himself. "When you get steel hot, it moves just like clay," Shea observes. "In the finished object there can be a sense of quick motion—it's like a frozen moment. You have the evidence of something that has flowed and curved. You can beat metal when it's cold, but to get a sense of motion, that's where the heat comes in." (Shea uses the terms "iron" and "steel" more or less interchangeably; technically, he notes, steel is an alloy of iron and other elements, most commonly carbon.) 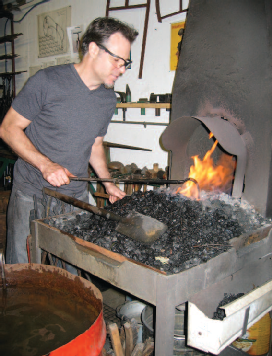 Shea also creates many of his own tools, like tongs and punches; from a recycled car axle, he made a horn-shaped gizmo that he uses as a form for circular shapes. He has several anvils; his main one—which he bought on eBay—weighs about 200 pounds, plus a sand-filled base. "Part of the appeal to people who buy, collect, and admire handmade work is that they have this sense that someone spent a lot of focused time and attention on it, and put a lot of passion into it," Shea says. "My work will be around, I hope, for centuries. A lot of responsibility comes with that—taking minerals from the earth and turning them into items of art and craft. If it's going to be around for hundreds of years, you should take the time to think about it."

But Shea acknowledges that there's a downside to creating something that labor-intensive: few people can afford his work. The insect-themed chairs cost about $5,800 each—"They're kind of masterpieces," he says, "there's so much intricate work involved"—with the set approaching $18,000. Objects such as candelabras start at $500, architectural elements at $15,000. "It's very expensive," Shea admits. "When I first set out I wanted to make work that was more affordable, but I just don't have a talent for it. My talent is for labor-intensive work that I get very absorbed in and passionate about. I want to make it the best it can possibly be." 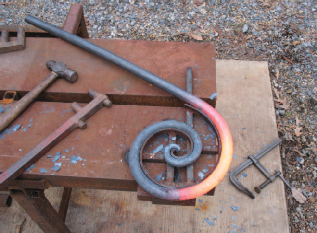 Although the recession slowed his business for a while, things have picked up; Shea is currently booked at least a year in advance. "If you're an independent artist, you're everything," he notes. "I'm the marketing department, the floor sweeper, the chief blacksmith." In one ongoing project, he's transforming the front stoop of a brick colonial townhouse in Arlington, Virginia; he has installed curved (and mismatched) railings and replaced the neoclassical "pineapple" pediment above the door with a bronze piece dotted with dripping glass forms. Now he's replacing the molding on either side of the door with bronze panels. "She loves odd things, so she really lets me go," Shea says of the owner. "She says it makes her happy every time she walks in."