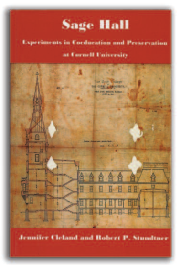 The 1996-98 renovation of Sage Hall was one of the most complicated and controversial projects in Cornell's history. The old building, which had opened as a residential college for women in 1875, was in terrible shape, so the renovation essentially consisted of putting a new structure inside the original walls. Easier said than done.

Sage Hall: Experiments in Coeducation and Preservation at Cornell University by Jennifer Cleland '72, PhD '99, and Robert Stundtner begins with an overview of Sage's early history and the battles that accompanied its pioneering role in co -education. The account of the renovation starts about halfway through and is interwoven with a memoir of the courtship and marriage of Cleland and Stundtner. The most entertaining reading, though, is the series of construction update e-mails written by Stundtner, the project manager, which are reproduced more or less verbatim. He traces the progress in detail, often with wry humor, providing a sort of cinema verité overview of the day-to-day troubles and triumphs. There's also a good account of the opening of the original cornerstone, which contained Ezra Cornell's 1873 letter to "the coming man and woman"—a missive whose contents had remained mysterious for more than a century.

Like many self-published works, this book suffers from curious typography and errors large and small. Even so, the inside view of the massive project that produced a spectacular new home for the Johnson School is a valuable nugget of Cornell history. For more information, go to: www.sagehallbook.com.