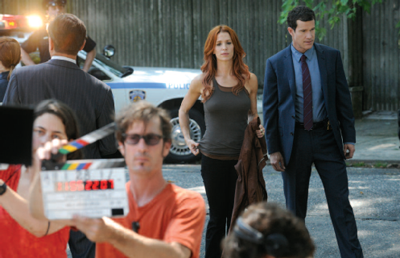 When English professor J. Robert Len non was asked to contribute a story to an anthology of superhero fiction, he dispatched the assignment in a brisk four hours. The result was "The Rememberer," which appeared in the 2008 volume Who Can Save Us Now? Brand-New Super-heroes and Their Amazing (Short) Stories. After that, Lennon pretty much forgot about the tale—which, ironically enough, involves a female FBI agent who remembers everything that has ever happened to her. "It was not an action-type story at all," Lennon observes. "It was a contemplative, depressing story, and she dies at the end."

The author of such novels as Mailman and The Funnies, Lennon has a West Coast agent charged with getting his work optioned for film and TV—but he never thought to send her "The Rememberer." Then he was struck by the sort of lightning that writers dream of: someone at Sony Pictures read the book and sought the rights to his story. "It was out of the blue," he recalls. "Of all the things my agent had been trying to sell, someone thought it would make a good TV show."

That show, retitled "Unforgettable," has emerged as a Tuesday night hit for CBS, home of such crime blockbusters as "NCIS" and "CSI." It stars Poppy Montgomery (of the missing-persons drama "Without a Trace") as Carrie Wells, a former Syracuse detective who reluctantly joins the NYPD after a long hiatus from law enforcement. Like Lennon's protagonist, she struggles with the blessings and burdens of her perfect memory; in material original to the show, she also copes with a lingering attraction to her former boyfriend (a fellow cop played by Dylan Walsh of "Nip/Tuck")—and is haunted by her sister's unsolved murder, the only memory she can't recall. "We were primarily taken by two key elements of [Lennon's] story, which appealed to our imaginations as writers," show creators Ed Redlich and John Bellucci said via e-mail. "One was the idea of a person who could remember an entire life, and the second was the personal and emotional cost of living with that ability. Neither one of us was eager to simply write a whodunit procedural, nor did we want to treat the gift of her memory as some kind of parlor trick that would allow her to solve crimes."

As of its first half-dozen episodes, the creators report, the show had the highest ratings of any new drama—prompting the network to order a full season. "Its action sequences are energetic, its crime scenes shot with noirish gloom," said the Miami Herald. "And the video effects that allow Montgomery to stand outside her own memories, examining them for telltale clues, are eye-popping. But it's the pained longing of Montgomery and Walsh that turn 'Unforgettable' into something much more profound: a meditation on the fleeting nature of memory, how it can burden us and betray us, comfort us and console us."

For Lennon, the show has offered a publicity boost—his name appears prominently in the opening credits—and a modest income bump, though not Hollywood-style riches. He's keeping his day job as director of creative writing at Cornell, and he recently completed his latest novel; Familiar, a domestic drama with sci-fi elements, comes out in October from Grey-wolf Press. But there have been a few perks: he's garnered some new fans, and last fall he and his parents mingled with the cast and crew at the show's production facility in Queens. "It was really cool," he reports. "Their police station mockup was wildly convincing, right down to the cheap and weathered metal-frame desks and American flag stickers." As for his feelings about the show itself, he says he's generally delighted—but admits that due to his busy schedule (and the fact that he doesn't have cable), he's seen only the pilot. "I don't watch much TV," says Lennon, pledging to catch up on all the episodes when his workload lightens. "That's not out of cultural snobbery. If I had an extra life to live, I'd probably spend the whole thing watching television."