At the end of Thanksgiving break her junior year, Dori Crozier '52 rode the train from New York City to Ithaca—one of many times she took the Lehigh Valley Railroad to and from Cornell. But this particular journey proved to be especially significant: she happened to sit next to classmate Terry Warren '52, JD '56, who'd eventually become her husband.

In June, the Warrens are co-chairing their class's 60th Reunion—whose theme, appropriately enough, is train travel. With "All Aboard!" as its slogan, the class will give out train-themed mementos and reminisce about their days riding the rails; the Big Red Bear will even come dressed for the occasion in overalls and a railroad cap. "There's something romantic about trains," says the Johnson Museum's Nancy Green, who's curating the exhibit "When Ithaca Went by Train" to coincide with the '52 gathering. "I think we all have a little nostalgia for train travel simply because it was a way of getting around without having to get in your car and rush." 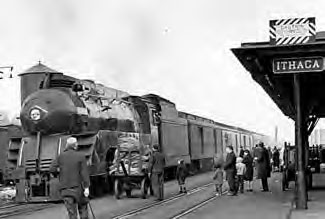 Helen Santilli '52 is arguably the class's most avid train buff; she has taken more than eighty rail vacations over the past two decades. "When I was in college, I took the Lehigh Valley about four times a year," says the former sociology major. "It was a long and tiring trip, and when I graduated I thought I'd never travel by train again." But now, she says, "I find it a mesmerizing, meditative, and relaxing way to travel." She and her companion, Lyn Barber, PhD '69, have traveled by train on every continent except Antarctica. "Anything with a superlative attached to it—longest, fastest, most luxurious—I've got to experience," Santilli says.

The 60th Reunion will culminate with a Sunday gathering at Ithaca's former train station; though it's now a bank, the class has secured permission to hold its farewell brunch there. Sadly, though, the classmates won't be able to travel to Reunion via rail. The last passenger train left Ithaca in 1961.