The Informant! takes a wacky look at an alum who spied for the FBI

The Informant! takes a wacky look at an alum who spied for the FBI

Mark Whitacre is a hero for blowing the whistle on an outlaw conglomerate. He's a compulsive liar who got his hand caught in the corporate cookie jar. He suffers from bipolar disorder. He was screwed over by the FBI. He got the second chance he deserves. He's a con man extraordinaire.

Any and all of those things may be true. And nowadays, Whitacre, PhD '83, is also chief operating officer of a small biotechnology firm, Cypress Systems Inc., in Fresno, California—a job he walked into after nine years in federal prison. The nutritional biochemistry grad is the main character in a darkly comic film called The Informant!, based on the book by Kurt Eichenwald; it came out on DVD in February.

The movie chronicles Whitacre's mid-Nineties tenure as an FBI mole at Archer Daniels Midland (ADM), the agribusiness giant that once proclaimed itself "supermarket to the world." It explores the dissonant, complex, and manic mind of a man who managed two major divisions of his company while spying for the government. 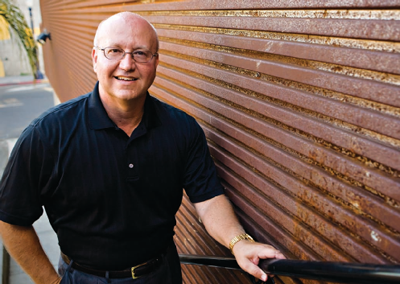 With an overstuffed (and Golden Globe-nominated) Matt Damon in the lead role, the movie is full of comic touches. But the reality was far from funny, says Whitacre, and the racing thoughts and interior monologues—on topics from indoor swimming pools to Japanese panty-vending machines—are the inventions of a Hollywood screenwriter. Still, Whitacre says he's not insulted by any of it. He sees director Steven Soderbergh's movie as a fine portrayal of a man under incredible pressure while suffering from an undiagnosed mental illness.

In all, Whitacre gave the FBI 239 surveillance tapes detailing international price-fixing deals for lysine, citric acid, and high fructose corn syrup that cost consumers billions of dollars. But his is no simple David and Goliath story. Whitacre embezzled $9 million from ADM while undercover, a fact that nearly ruined the FBI's case when it came to light—though some of the agents involved in his case are now seeking a presidential pardon for him. "He really screwed up by stealing," agent Dean Paisley told CNN. "Be that as it may, how many hundreds of millions would have been stolen if [ADM] wasn't stopped by Mark Whitacre? He is a national hero, in my eyes."

Today, Whitacre blames his misdeeds on a combination of undiagnosed bipolar disorder and stress. "I was undercover for three years without any psychological help," he says. "They treated me like a robot. I had a recorder in my briefcase, another in my jacket, and one in my notebook." He's quick to point out that "poor decision-making around financial matters" is a classic symptom of severe bipolar disorder and says that in his distorted thinking at the time, he felt entitled to the money. "I don't believe that anymore," he says. "It was wrong, I was wrong, and all that money was paid back."

He also says that youthful ambition and greed played big roles in his behavior; industry insiders once considered him a shoo-in for president of the company. "I remember him as a superb student, one of the best I ever had in my twenty-eight years of teaching at Cornell," says his former thesis adviser, nutritional science professor emeritus Gerald Combs Jr., PhD '74. "He was extremely enthusiastic, very smart with a lot of energy. The technicians at the lab would joke at morning meetings about not giving any coffee to Mark because 'he's already too revved up.' "

ADM headhunters had lured Whitacre away from a German competitor after he built a successful lysine production plant in New Jersey, landing him a plum job at the Fortune 100 company at the age of thirty-two. He rose quickly, but began informing for the FBI after ADM called in the agency to investigate problems with its lysine production line. As the film depicts, an agent was dispatched to interview Whitacre at home. The executive went into a sweaty panic and told his wife about price-fixing at ADM; she insisted he come clean or she would tell the agent herself.

Eventually, three top ADM executives were sentenced to federal prison, each serving three years. In 1997, the company was fined some $500 million, then the largest antitrust penalty in U.S. history. Whitacre himself served nine years for fraud and embezzlement. In one of the final scenes in The Informant!, he leaves prison—wearing a Cornell sweatshirt under his jacket. As Whitacre recalls it, he did indeed meet his long-suffering wife at the gate, but he was actually wearing a dress shirt. "They added the sweatshirt in the movie," Whitacre says. "I thought it was a nice touch."