Veronica Ribot-Canales mimics a diver's walk and approach along the slippery tiles of Teagle Pool, taking small, calculated steps and pantomiming the dive's flips with her arms. One meter above her, Chris Donohoe '09 follows the coach's routine and bounces off the board, flipping twice in the air before opening up and piercing the water with little more than a ripple. Cornell diving's new head coach smiles and claps, energetically motioning to the next diver. Known for her hands-on coaching style, Ribot-Canales is rarely seen sitting down during a practice or meet. "It's as if I'm exercising the entire time I'm coaching," she says.

As Teagle Pool welcomed its animated new coach last fall, it bid farewell to a Big Red diving legend. From 1968 to 2007, Rick Gilbert steered his divers to 13 Eastern Intercollegiate Swimming League titles and four All-American honors, and he was named Eastern meet diving coach of the year four times. In the early Nineties Cornell could usually be found near the top of the Ivy League, but recently the program has struggled to break out of the pack. "Coach Veronica brings a new perspective," says Donohoe. "She's focused on the mental aspect of diving, using her personal experiences to explain where your thoughts need to be when you're competing."

For Ribot-Canales, the diving season doesn't end with the final meet. She has introduced a rigorous, year-round "dry-land" training regimen, from core strengthening to weight-lifting, and held optional practices three times a week. "The diving season ends before spring break," she says. "If we don't meet for the next six months, it would be like starting all over again. It would be a waste of all the hard work if we didn't train in the off-season."

Ribot-Canales came to Cornell following a 17-year diving career; she is a three-time U.S. champion and a four-time Olympian. But as her competitive days came to a close, she wanted to stay involved in the sport. So she transitioned to coaching by founding Team Olympia, a squad in Kendall, Florida, for divers below collegiate age.

On the Hill, Ribot-Canales has challenged her athletes to push their limits and try more difficult dives. Donohoe learned five new dives this year, including a three-and-a-half somersault; Kathryn Aden '10 mastered a one-and-a-half back flip, which was especially tough considering that she'd just started the sport. Competing as a gymnast, Aden had suffered a partially torn ACL her freshman year. Realizing that her body was "done with gymnastics," she approached Ribot-Canales. "I got on the board and she started teaching me, and it just clicked," Aden says. Ribot-Canales helped her unlearn the most basic gymnastic instinct: landing on her feet. "Coach Veronica spotted me on the trampoline repeatedly to try to get me to land on my head, and that helped a lot," says Aden, who ended the season as the highest female scorer on the team.

Although Ribot-Canales has only one collegiate diving season under her belt, she hopes her methods will help the Big Red compete better with the top diving schools in the Ivy League, such as Harvard and Dartmouth. But her athletes are just excited to be working with such a renowned diver. Says Aden: "It kind of gives us bragging rights." 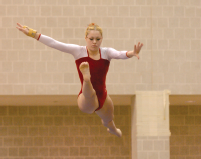 ALMOST! Two Cornell teams were one step away from winning national titles this spring. The gymnastics squad finished second at the USA Gymnastics Collegiate Championship, its best showing ever at the meet. The Big Red finished one point behind Texas Women's College after setting school records for team scores in the vault, floor exercise, and all-around. Megan Gilbert '08 led the way with a second-place finish in the bar. In addition, Cornell head coach Paul Beckwith was named the USAG National Coach of the Year. The other near-miss was recorded by the men's polo team, which lost the national championship match to Texas A&M 20-10. In the semifinals, the Big Red beat second-ranked Virginia 16-15 after trailing 11-6 at halftime. Robert Harvey '09 led Cornell with 11 goals.

WINNING STREAKS They took different routes, but both the men's and women's track and field teams ended up in a familiar spot at the 2008 Outdoor Heptagonal Championships: first place. The men rolled to their sixth straight outdoor Heps title in dominating style, finishing with a meet-record 199 points. Adam Seabrook '08 was named the Most Outstanding Performer after winning the 400 meters and 400-meter hurdles and also running on the first-place 1,600-meter relay and second-place 400-meter relay teams. The other individual champions included Muhammad Halim '08 in the long jump and triple jump, Sage Canaday '08 in the 10,000 meters, Saidu Ezike '08 in the 100-meter hurdles, and Garrett Huyler '09 in the high jump. The women's team, meanwhile, had to rally from a 51-point deficit to edge Princeton and win their seventh straight outdoor Heps title. Jeomi Maduka '09 shared Most Outstanding Performer honors with Penn's Stacy Kim after winning the long jump (with a meet-record leap of 21 feet 3.25 inches), the triple jump, and the 200 meters, while also running on the first-place 400-meter relay team and finishing second in the 100 meters in a school-record 11.71 seconds. It was the fourth time that Maduka won a Heps Most Outstanding Performer award. Other individual champions for the Big Red were Joan Casey '08 in the 100-meter hurdles, Maria Matos '09 in the discus, and Jessica Weyman '10 in the 400-meter hurdles.

CHAMPS AGAIN In May, the men's lightweight rowing varsity-eight won their second Ivy League championship in three years at the Eastern Sprints, held on Lake Quinsigamond in Massachusetts. They finished more than three seconds ahead of second-place Princeton. The lightweight team placed all five of its boats in their respective grand finals and captured the Jope Cup, given to the top overall team, for the first time since 1992.

TORCH BEARER Former Big Red lacrosse goalie Kyle Miller '06 carried the Olympic Torch on its way to Beijing for the 2008 Summer Games. His stint covered a half-mile near Shanghai. He was selected after his brother wrote an essay nominating him for the honor as part of a contest in Canada. Miller was diagnosed with cancer in 2003, and his recovery exceeded the expectations of doctors who said he'd never play lacrosse again. He went on to play for two years at Cornell and was a member of the Canadian team that won the World Championship in 2006.

COACHING ACE Women's tennis coach Rob Weiss was inducted into the NCAA College Tennis Hall of Fame during the NCAA Division Championships in Tulsa, Oklahoma. Weiss was a two-time All-American at Pepperdine and won the 1988 singles title. After leaving school, he was ranked as high as 85th in the world as a professional and defeated former number-one players Boris Becker, Ivan Lendl, and Patrick Rafter. Weiss joined the Big Red coaching staff in 2007 and led the team to a 9-7 record last season.

IN MEMORIAM The Cornell crew team has a new boat. The four-seat scull was christened the Michael J. Lacasse '98 during a special ceremony on Cayuga Inlet after Cornell's regatta with Georgetown in April. Lacasse died of cancer in 2000, and the scull was purchased in his memory by a group of former teammates.

STEPPING UP Three Cornell hockey players got a jump start on their professional careers, signing contracts shortly after the end of the college season. Topher Scott '08 inked a deal with the Elmira Jackals of the East Coast Hockey League, where he had a goal and four assists in 11 games. Ray Sawada '08 signed a two-year entry-level contract with the NHL's Dallas Stars; he was assigned to the Iowa Stars of the American Hockey League and had two goals and seven assists in 10 games. And Doug Krantz '08 agreed to terms with the Texas Brahmas of the Central Hockey League, where he had two assists in 11 playoff games.

RACING PIONEER One of the founders of road racing in Watkins Glen, Cameron Argetsinger, JD '54, died at his Burdett, New York, home in April. Argetsinger laid out the original 6.6-mile course that wound through the streets of the town and circled the state park. In 1956, a purpose-built road course was opened outside of town and became the home of the United States Grand Prix, which was held there from 1961 to 1981. The track has hosted NASCAR Nextel Cup events since 1986 and is also the site of IndyCar and NASCAR Nationwide Series events.