Becoming a blacksmith was not on Shea's radar when he was growing up on suburban Boston's North Shore, the son of an operations engineer and a homemaker. He loved writing as a high school student and majored in English with an eye toward penning the great American novel; on the Hill, he edited the film calendar for Cornell Cinema. "I think my writing career peaked when I wrote a completely bogus blurb about The Road Warrior," Shea confesses. "I said it was a musical." After graduation, he waited tables on Capitol Hill and wrote short stories in his off hours. "It took me a while to realize that although I could write pretty well if I worked at it, I didn't actually like doing it," he recalls, then adds: "I became a blacksmith because writing was too hard." 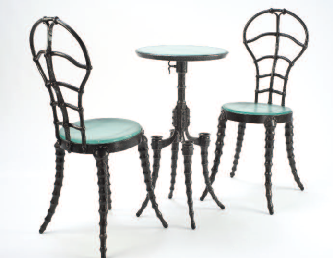 In between writing and blacksmithing were years spent working for the D.C.-based Shakespeare Theatre Company; he started in the box office and later managed its school touring company. "I could see Shakespeare plays every night of my life, and often did," says Shea, a lifelong fan of the Bard. "I walked to work every day for five years and said to myself, 'There's something else I'm supposed to be doing, but I have no idea what it is.' I found myself working with my hands, which I hadn't done since I was a kid."

He took classes in woodworking, ceramics, and jewelry-making; he made puppets, including an Oedipus Rex that tears out its own eyes. (He still has it, and it still wows visitors.) "I'd make a piece of wood furniture and paint it with metallic paint," he recalls. "I'd build a ceramic vessel and glaze it with metallic glaze. I was trying to tell myself something—that I would make these things in metal if I knew how." Eventually, he and his wife moved to rural Tennessee, where he spent two and a half years at the Appalachian Center for Craft learning blacksmithing, silversmithing, woodworking, and glassmaking. Early commissions for practical ironwork like railings and gates eventually blossomed into his current career; in addition to the Renwick, his work has been shown at the Wexler Gallery in Philadelphia and at the Houston Center for Contemporary Craft, among other venues. "I learned early on that at least in this area, I have a lot of patience," Shea says. "I love nothing better than a challenging job that will take me months from start to finish—to design it, draw it, engineer it, and get things just right." 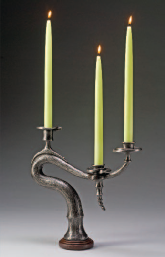 Shea notes that although he uses many classic techniques, he's not a historical blacksmith akin to those who work at Colonial Williamsburg—those for whom using only period tools is central to their calling. "There are historical smiths who are brilliant and talented, and we learn a lot from them," he says. "It interests me, but I'm more interested in making what I want to make; I don't use a technique because it's old, I use it because it works. In my shop, the end justifies the means. Often you'll find the traditional ways are the best—but a modern TIG [arc] welder is a really nice thing. If I could go back in time and offer one of those smiths the TIG welder, I think he would take it."

Of course, blacksmithing has its occupational hazards; like a chef, Shea has been burned more times than he can count, and has bashed the occasional finger. "I've never had any serious burns, it's more just an 'ouch,' " he says. "I've never had to go to the emergency room, and I've still got all my fingers." Next to his forge is the "slack tub," a drum full of cold water used to control the fire or cool metal; it's also handy for dunking a burned hand to limit tissue damage. "I've heard that in earlier times people would drink water from the blacksmith's slack tub," he adds, "because they thought it had medicinal properties."

More worrisome are issues like tendonitis of the wrists and elbows from all that repetitive hammering—he combats it with stretches, anti-inflammatories, and lots of ice packs—as well as back problems, which bedeviled him early in his career. "I had pretty bad back trouble at first, and I was concerned that I wasn't going to be able to do this, because I could count on being laid up a week at a time," Shea recalls. "I started doing yoga seven or eight years ago, and that's helped a lot; I'll stop and do 'downward dog' right here on the floor." Upon reflection, though, he blames his back pain not so much on his current career as on his previous one. "I had some back trouble before I started," he says, "but I think that was from sitting at a desk and working at a computer."