Judy and Gary Kopff begin entertaining people as soon as they arrive at a hospital and step out of their tiny convertible in full clown costume. They struggle into their huge shoes—so large they can't wear them in the car—and try to walk up the stairs sideways, like skiers inching up a hill. 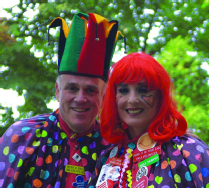 The Kopffs have been doing volunteer clowning at hospitals in the Washington, D.C., area since the mid-Nineties. Before then, Judy Kopff worked at the Pentagon, managing mission operations for contractors in Iraq and Afghanistan; now retired, she volunteers almost full-time. She and her husband, a financial strategy consultant, bring cheer to pediatric wards and to recuperating soldiers at Walter Reed Army Medical Center.

At Walter Reed, they entertain soldiers who have been injured in Iraq or Afghanistan. Besides clowning, they sometimes just chat with patients. "It doesn't matter that they're in a hospital bed," Judy Kopff says. "I talk to them as if they're sitting next to me at a dinner party." When they go to children's hospitals, they blow up balloons, tell jokes, and do magic tricks. "There are some kids who are so medicated that they can't respond, but they can smile," says Judy. "That's all we want—to bring a smile to their faces, if just for a second."

Kelwin Harris grew up in Auburn Gresham, a predominantly African American neighborhood on the South Side of Chicago. Now back in his hometown after earning two Ivy League degrees, he is working to help local kids follow in his academic footsteps.

Harris is executive director of the Beloved Community, a program in Auburn Gresham that aims to give at-risk students opportunities for a better future. Founded in 2004, it offers after-school services like SAT prep, help with coursework, and instruction in life skills such as conflict management. It currently serves more than 100 youth in grades seven to nine; the students will continue the program through high school, while students in lower grades are introduced into the cycle.

According to Harris, the program's biggest success has been its college exposure program, in which the Beloved Community takes teens on tours to top universities so they can see what may await them if they study hard. "The idea is to expose disadvantaged youth to opportunities outside their traditional realm," says Harris. When the students come back, he adds, they're "extremely motivated."

After graduating from the College of Architecture, Art, and Planning and earning a master's in urban planning from Harvard, Harris worked for a consulting firm in California before returning to Chicago to tackle public housing issues for the mayor's office. In addition to youth enrichment programs, his work with the Beloved Community has included providing transitional shelter to the homeless, rehabbing apartments to create more affordable housing, and offering education and entrepreneurship counseling for adults. Says Harris: "People are starting to see the value of organizations like this one, that provide opportunities to be a part of the solution."