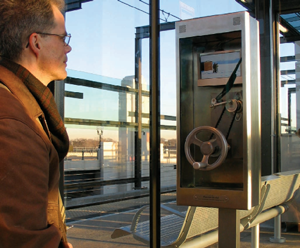 In "Small Kindnesses, Weather Permitting," an installation on a light rail line in Minneapolis, Zweig created eleven interactive kiosks where commuters can summon audio and video clips riffing on two of the city's stereotypes: friendliness and harsh winters. For a light rail station in St. Louis, Zweig used materials from two demolished buildings to spell out the name of the neighborhood ("Maplewood") on an overpass, once forward and once in a mirror image. Zweig quotes Marshall McLuhan in describing the piece: "We look at the present through a rear-view mirror."

In her Sculpture essay, Phillips calls Zweig's body of work "curiously challenging." As she writes: "It asks questions about public life, public space, participation, performativity, and tensions of I and We that thinking subjects in public space—and public artists—must constantly sustain and negotiate."

Growing up in Chicago, the daughter of a chemist/businessman and a homemaker, Zweig never imagined a career as an artist—though she made art throughout her childhood. She arrived on the Hill in 1967. "It was an amazing time at Cornell," she says. "It was kind of 'the' political moment, so it was very exciting to be there." Zweig majored in art history, but took a wide variety of courses—anthropology, biology, French. She envisioned a career as an academic, but classes at the Visual Studies Workshop in Rochester led her to earn an MFA, working mostly in photography and printmaking. She got a job at a fine arts press in Toronto and worked as a graphic designer, eventually getting a teaching job at the Rhode Island School of Design, where she remains on the faculty. "I followed a long path of interests," she says. "I had ambition, but never toward a single goal." 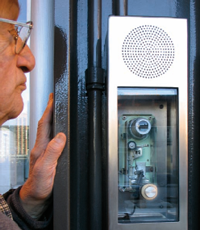 Zweig eventually segued to a career in gallery sculpture, such as the 1993 piece "Mind Over Matter"—made of a computer, printer, paper, rope, pullies, a rock, and a basket. As Zweig describes it: "A computer was fed three sentences: 'I think therefore I am' (Descartes), 'I am what I am' (Popeye), and 'I think I can' (The Little Engine That Could). In the gallery, it randomly generates all possible sentences (hundreds) from the parts, for example: 'I think I can think,' 'I am what I think I am, I think,' 'I can think what I can,' etc. Text slowly falls into basket, lifting rock."

Zweig got her first public art commission in 1994 and now devotes herself to the field full-time. She lives and works in Brooklyn Heights, where her studio is on the second floor of her apartment. "The arts kind of pulled me," she says. "It seemed impractical, but I was so drawn to it, that's what I followed. I often tell my story to my students, because I think leaving yourself open to discover what you want to do, and not to have an idea in the beginning, is a little chancy, but it's exciting. You enter school and you're not sure what you want to do, but you let your courses, teachers, and experiences inform you, and your career develops."

Leaving herself open to discovery is part of Zweig's artistic process: when she gets a new commission, her first step is to travel to the site and to talk to as many people as possible. "I try to get not so much a sense of the place, but of the people—a sense of who the audience will be for a particular work," she says. "I try to figure out what they're trying to tell me that they want. I often don't give people what they pictured, but I try to give them what they want." While Zweig's time in the studio is in large part solitary, she notes that public art is inherently a collaborative medium—requiring that she work not only with residents and municipalities but with the specialists in fields like computer programming and metal fabricating that help bring her vision to life. "There's so much interaction—some wonderful, some difficult," she says. "In public art there are so many problems, obstructions, issues, and hoops to jump through. And while a lot of the details may be frustrating, all that interaction with so many kinds of people is gratifying. The frustrating part of public art, and the rewarding part of public art, are the human interactions." 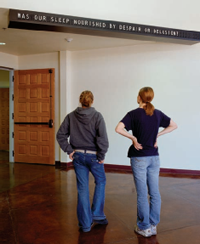 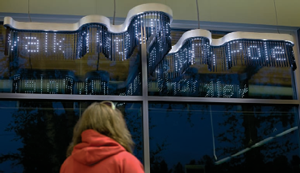