Since coming to Cornell from tiny Durham, Ontario (population 2,500), Mike Schafer ’86 has achieved most of his goals. He and his older brother Gerry—the sons of a lumberjack—were the first in their family to earn college degrees. As a Big Red defenseman, Schafer was a two-time captain who led the team to one ECAC and three Ivy titles. As an assistant coach at Cornell from 1986 to 1990, he recruited 14 players who went on to be NHL draft picks. As head coach for the last 17 years, he has established the Big Red as a perennial powerhouse: the team has won five ECAC titles, qualified for nine NCAA tournaments, and produced 17 NHL players. His career record of 332-182-63 makes him the winningest coach in Cornell history. 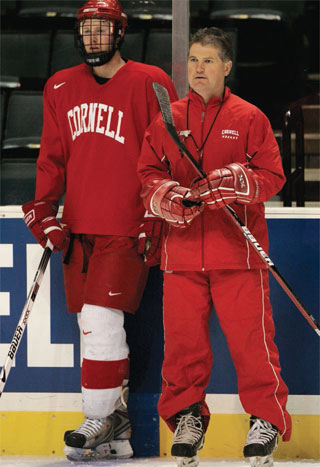 But for all Schafer has achieved, he has yet to realize his ultimate goal: an NCAA championship. Cornell, which won the NCAA crown in 1967 and 1970, came tantalizingly close in 2003, losing 3-2 to New Hampshire in the Frozen Four semifinal. Last March the Big Red opened the NCAAs with a 3-2 victory over Michigan, but then lost 2-1 to eventual runner-up Ferris State. “Our guys know how tough it is to win a national championship,” says Schafer. “Look at teams that have all the facilities, money, and scholarships, and even they struggle with winning it all.”

This season, Schafer just might capture his big prize. At least he’s got a team with a strong shot at it: Cornell returns 16 lettermen and eight of the top nine scoring leaders from last season, including senior forward Greg Miller, who was first in points with 14 goals and 17 assists. The squad also includes eight NHL draft picks, led by six-foot-four, 193-pound freshman defenseman Reece Wilcox, a 2012 fifth-round selection of the Philadelphia Flyers.

Cornell won’t have to wait until the NCAA tournament to learn how it stacks up against the nation’s elite. The team has its strongest-ever non-conference schedule, with all seven games against 2011 and/or 2012 NCAA qualifiers—including a showcase contest on November 24 against Michigan at New York’s Madison Square Garden, continuing the Thanksgiving weekend series that began with three sold-out matches against Boston University.

Building a juggernaut at Cornell has been no small feat, considering that the University doesn’t offer athletic scholarships, has a smaller budget than most hockey powerhouses, and must find the rare young men who aspire to succeed both in the classroom and on the ice. Former players attribute Schafer’s success to his being a defensive mastermind (in 2004–05, the Big Red set a post-Depression-era NCAA record, allowing just 1.29 goals per game) and to his uncanny ability to forge deep bonds within the team. “In the preseason, Coach always had us do activities that would unite us,” says Colin Greening ’10, a first-team Academic All-American (he graduated with a 3.99 GPA) who is now a left wing with the Ottawa Senators. “We’d go camping as a group and do hard labor, like chopping wood and landscaping, to bring us together.” 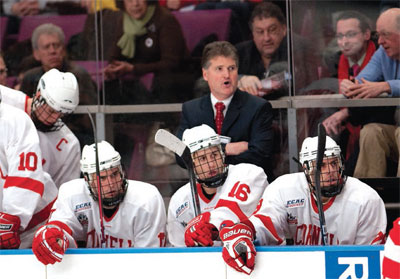 Former players also point out that Schafer hires nonpareil assistants to handle critical duties, and he puts great trust in his staff. The crucial role of recruiting players capable of earning an Ivy League degree was carried out for 12 years by assistant coach Scott Garrow (now at Princeton) until Ben Syer took over the job in 2011. Meanwhile strength and conditioning coach Tom Howley has for almost 20 years been getting the players into Olympian shape, not only physically but mentally. “Coach Howley drove us to do more than we’d ever have done on our own,” says goalie Ben Scrivens ’10, a first-team All-American now with the Toronto Maple Leafs. “I wouldn’t be playing professionally without the physical development I had from Coach Howley and his staff.”

If Schafer’s squad doesn’t win it all this season, he might not get many more chances—at least in Ithaca. His contract expires in four years, and it would not be entirely surprising if he doesn’t sign a new one. As his reputation has grown, Schafer has been sought by other programs, although so far he’s rebuffed all offers. He has remained on the Hill not only because of his passion for his alma mater, but because he and his wife, Diane Composti Schafer ’86, didn’t want to disrupt the education of their three children, the youngest of whom will graduate from Lansing High in 2016. After that, Schafer could well opt to make a fresh start at another school or pursue his dream of coaching in the NHL. “We have high expectations this season, as usual, and now we have to manage expectations by getting to work and plugging away,” says Schafer. “As for the future—you never know what it holds.” 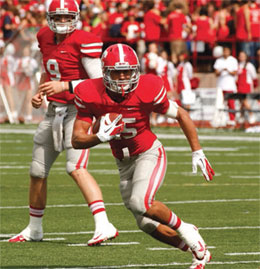 A Homecoming crowd of more than 15,000, along with a national television audience watching on the NBC Sports Network, was treated to an offensive explosion as the football team trounced Yale 45-6. It was the Big Red’s largest margin of victory ever against the Elis and marked the most points Cornell had scored against Yale since 1949. Quarterback Jeff Mathews ’14 led the way, completing 29 of 39 passes for 340 yards and four touchdowns to earn Ivy League offensive player of the week honors for the fifth time in his career. Freshman running back Luke Hagy was named the Ivy rookie of the week after rushing for 88 yards and two touchdowns on 21 carries; he also had 69 receiving yards on five catches.

STRONG START For the first time, the men’s soccer team began its season with nine straight wins, including a 3-2 victory over Penn in the Ivy League opener. The nine victories gave the Big Red its longest winning streak since an 11-game run in 1995. Daniel Haber ’14 has been the catalyst, earning Ivy League player of the week laurels in three of the first five weeks of the season while scoring 14 goals. Only two Cornell players (Victor Huerta ’73 in 1971 and 1972, and Eric Kusseluk ’97 in 1995) have scored more goals in a single season.

NUMBER ONE The women’s cross country team posted one of the program’s best performances in winning the Paul Short Invitational at Lehigh University on September 28. The Big Red easily topped the 40-team field with 55 points, far ahead of second-place William & Mary’s 102. Cornell had three runners in the top 10, led by Katie Kellner ’13, who covered the six-kilometer course in 20:22 for second place overall. Rachel Sorna ’14 followed in fourth and Emily Shearer ’14 was ninth.

HOME AGAIN The Cornell athletic department turned to familiar faces to fill some openings this summer, hiring four graduates as assistant coaches. Elizabeth Dalrymple ’11 will serve as pitching coach of the softball team after twice winning Ivy League pitcher of the year honors during her playing career. Zeb Lang ’03, MBA ’11, will be an assistant coach for men’s track and cross country after serving as a volunteer assistant the past three seasons. Cecelia Madsen ’12 will move from her seat in the women’s varsity eight boat to a post as assistant coach with the women’s rowing team. And Matt Rung ’10 returns to the men’s lightweight crew program as an assistant coach after working with the rowing teams at the University of Washington and Princeton for the past two seasons.

LONG HAUL The 2012 season got off to a dramatic start for the sprint football team as the Big Red outlasted Penn 42-34 in six overtimes. The teams were tied 21-21 at the end of regulation. Cornell opened the sixth overtime with a one-yard touchdown run by quarterback Brendan Miller ’14, who then hit Spenser Gruenenfelder ’13 for the two-point conversion pass. When Penn’s fourth-down pass attempt fell incomplete, the Big Red won the game, which lasted more than five hours, including a two-hour weather delay in the first quarter.

READY TO GO Expectations are high for the women’s ice hockey team, as the Big Red has been ranked third in the national preseason poll and tabbed by the ECAC coaches as the favorites to win a fourth straight regular-season title. The players’ offseason achievements certainly bode well. Six Big Red skaters—Jessica Campbell ’14, Hayleigh Cudmore ’14, Laura Fortino ’13, Brianne Jenner ’13, Cassandra Poudrier ’16, and Jillian Saulnier ’15—were members of the Canadian Under-22 Development Team. Fortino and Jenner served as assistant captains in a three-game series against a U.S. team that included Cornell goaltender Lauren Slebodnick ’14, who picked up the win for the Americans in game two, making 21 saves.

MOVING UP Baseball star Brian Billigen ’12 didn’t have to wait long for his first professional promotion. After hitting .327 with 17 RBIs in 30 games with the Arizona Diamondbacks team in the rookie-level Arizona League, Billigen advanced to the South Bend Silver Hawks in the Class A Midwest League, where he hit .250 with a homer and five RBIs in eight games.