Not sold in stores, or it wouldn't be fresh. That's the motto of Martin Glinsky's company, Sedona Pet Products, which offers cat and dog food delivered to the customer's door. The CALS grad, who holds a PhD in animal nutrition from the University of Illinois, says he was inspired to start the company after hearing complaints that regular pet food became less appealing the longer it sat on store shelves. "When the industry moved from synthetic to natural preservatives, people thought the food still had the same shelf-life. And products, depending on how they were stored, would start to degrade," Glinsky explains. "Consumers would say the food doesn't smell like it did before, and the dogs don't like it the way they used to."

The two-year-old company offers two brands, Dr. G's Fresh Pet Food and Dr. Marty's Organic Brand, both sold solely online. Prices range from about $22 for a four-pound bag to $82 for a forty-pound bag. The food is made to order with fresh ingredients, such as chicken, whole grains, and vegetables, and is delivered within a few days. According to Glinsky, pets can tell the difference. "I've actually been in a person's home when the package was delivered," he says, "and I've seen cats and dogs claw at the box." 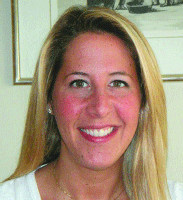 The creation of a diamond requires high temperatures and intense pressure over millions of years. Then it's Vivianne Ivanier's job to showcase nature's work with her own one-of-a-kind designs. A private jeweler based in New York City, Ivanier oversees each step of the creative process: she consults with clients, designs the piece, gathers the materials, then hires an artisan to create the final product. "The piece of jewelry doesn't exist before the client orders it," Ivanier says. Though she describes her taste as classic, she says she's open to designing whatever the client wants. "The only limit," she says, "is their creativity and mine."

After graduating from CALS with a degree in applied economics and management, Ivanier visited a jewelry factory with a friend who works in the industry. Inspired by what she saw, she studied at the Gemological Institute of America and began designing jewelry for friends while earning her MBA at Fordham University. Ivanier says she was motivated to start her own business when she realized she could sell the same products as high-end jewelry stores, but at a lower price. "My clients get jewelry designed from scratch," she says, "but without the high-ticket mark-up."

Instead of working out of a storefront, Ivanier meets clients in casual settings such as bars, restaurants, or their own offices. She works primarily in diamonds, platinum, and gold, and her business is based entirely on referrals. Though she designs all kinds of jewelry, 90 percent of her work is for the bridal industry—engagement rings, wedding bands, and anniversary gifts. "The best part about my job," she says, "is that I'm working with people in their happiest moments."