For the longtime CAM contributor, an invitation to attend his 15th Reunion sparked a bit of an early midlife crisis. Herzog, a writer of travel memoirs, was inspired to take a solo road trip across the country—a voyage of self-discovery that became his own odyssey to Ithaca. The experience was the basis of his new book, Turn Left at the Trojan Horse.

In an excerpt from his new book, Turn Left at the Trojan Horse, a longtime CAM contributor ponders how an invitation to attend his 15th Reunion in 2005 sparked a voyage of self-discovery—his own odyssey to Ithaca

Mount Olympus has vanished, so I order another beer.

Around me, the patrons in this lofty bubble stab at pan-seared mahi mahi and sip Chardonnays as the restaurant rotates, revealing the wonders of Puget Sound in a slow-motion panorama. One floor up, tourists ooh and aah their way around the Space Needle's observation deck. Some five hundred feet below, the Emerald City continues with its daily bustle. 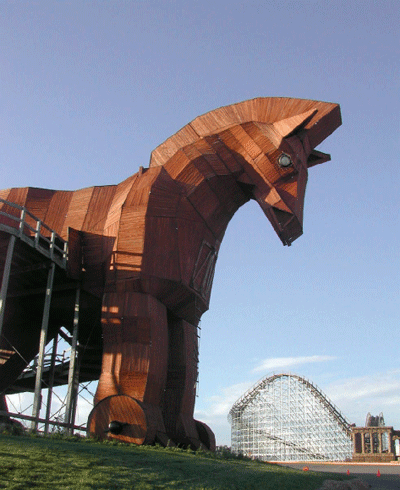 A silent procession hums along Interstate 5. Hulking vessels inch across the sound. A seaplane lands and glides to a stop on Lake Union. A cruise ship—the Sapphire Princess—sits patiently, dockside in Elliott Bay. To the east is the Seattle skyline backed by distant vistas of the Cascades. To the west is the Olympic Peninsula, where Mount Olympus rises regally from its center. But the sky is brimming with low stratus clouds, like ceiling tiles, and the mountain is hidden.

So this is where it begins—with my view obscured, but with the world revolving around me, one degree of perspective at a time.

I reach into my backpack, thumbing past tattered translations of The Iliad and The Odyssey and a few back issues of Sports Illustrated until I find an envelope containing a breathless invitation: "Calling all classmates around the world to join us in Ithaca!"

This is what brought me here. I have been invited—along with three thousand or so Cornell University classmates—to a 15th Reunion at the gleaming school on the hill in Ithaca, New York. Come enjoy the guest lecturers and the glee club concert! Hear the president's State of the University address! Take in an alumni baseball game! It might have added: Consider the stratospheric success of your classmates, and wallow in a sense of underachievement!

I seem to arrive at such an existential crisis every decade or so. I assume we all do, in one way or another. My first one happened when I was thirteen and about to celebrate my bar mitzvah, the Jewish rite of passage that was supposed to mean I was entering into some form of adulthood. I felt the weight of the world on my still-narrow shoulders, mostly because the world seemed suddenly complex and chaotic. I was overwhelmed by the onslaught of junior high school—the Darwinian game of social standing, the increasing imbalance of work and play, the shock of adolescence.

So I confronted this crisis of confidence by traveling inward, by delving further into my imagination. I escaped the chaos by creating worlds in which I was in command. I became a writer.

A few years later, in high school, I met Amy—as a result of my writing, in fact. An English teacher had decided to read one of my papers to her class. I stopped in to chat for a moment. Amy says she liked my smile. I think she was smitten by my metaphors. We attended a couple of proms together, weathered college in Ithaca, and saved our pennies to pay for a walk-up apartment on a leafy street in Chicago's Lincoln Park neighborhood. Following the thrill of our wedding day, we found ourselves falling into a routine and a future laid out before us like a straight track to the horizon. True adulthood had arrived, and responsibilities along with it. But we yearned for options. We wanted to sample life's possibilities before settling down. So this time I responded by traveling outward. We collected our meager savings, bought a thirty-four-foot RV, and hit the highway.

Through forty-eight states and nearly eleven months, we allowed our thoughts to expand and fill the open spaces, crystallizing our criteria of what we wanted out of a place to live. In the end, we opted for small-town serenity on California's central coast, a place where John Steinbeck, Doc Ricketts, and Joseph Campbell used to clink beers, stare into tide pools, and ponder the human condition. I was self-satisfied at my ability to control my destiny and certain that the sky was the limit as long as I didn't settle for anything less than the ideal. But that was when I was a young phenom, newly married, already published at age twenty-six, still clinging to the idea that I could somehow change the world, one word at a time. That was before I had kids and a minivan and an unfathomable mortgage and the notion that my achievements were not meeting my expectations.