A first-time mom in her seventies, Marilyn Berger '56 lives in Manhattan with the boy she rescued from the streets of Ethiopia

A first-time mom in her seventies, Marilyn Berger '56 lives in Manhattan with the boy she rescued from the streets of Ethiopia

Danny Hodes seems like your typical nine-year-old boy. He sleeps beneath a Spider-Man comforter and totes a SpongeBob backpack to school. He likes pro wrestling and soccer and Scrabble. He dreams of being an actor when he grows up.

It's hard to believe that three years ago, he was one of the forsaken masses— a homeless runaway with a crooked back, malnourished and begging for loose change on the streets of his native Ethiopia. Now, he lives in a luxury apartment on Manhattan's Central Park West with Marilyn Berger '56, the seventy-five-year-old woman he calls "Mom."

Berger, who holds a master's in journalism from Columbia, has had a distinguished career as a print and TV reporter. She covered the Prague Spring for News-day, observed China's Cultural Revolution as a writer for the Washington Post, served as NBC's White House correspondent, and reported from the United Nations for ABC. Along the way, she met Don Hewitt, creator and executive producer of "60 Minutes." They were married when Berger was forty-three. Although she had experienced maternal yearnings in her twenties, she says, "That ship had definitely sailed." In the ensuing years, her life was orderly, adult-centered, rarely impulsive. 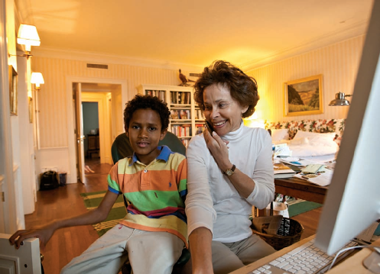 Then she met Danny.

The tale really begins in 2007, when Berger had lunch with her Cornell roommate, Jo Ann Kleinman Silverstein '56. Having just returned from Ethiopia, Silverstein raved about Rick Hodes, an American-born physician who has spent nearly three decades in Africa caring for desperately sick children—and often arranging for life-saving surgeries—at Mother Teresa's mission in Addis Ababa. He has taken more than twenty patients into his own home, adopting several. Berger, who has interviewed such figures as Jimmy Carter, Henry Kissinger, Anwar Sadat, and Golda Meir, calls Hodes "the most extraordinary human being I've ever met." In Ethiopia, where there are some five million orphans, he is often called Father Teresa.

When Silverstein asked if she knew anyone who might want to write a magazine article about Hodes, Berger nominated herself. In January 2008, she traveled to Ethiopia to research the story for Reader's Digest. On her sixth day, she saw a little boy amid the beggars and vendors of a dusty avenue, his arms as thin as a garden hose. "He was down on his haunches, his hand out, looking up at me," Berger recalls. "He had unbelievably long eyelashes."

He also had a profoundly curved back, a sign of spinal spondylitis, a form of tuberculosis that is virtually unknown in the U.S. but common in Ethiopia—and often fatal if left untreated. Berger found Hodes, and they returned a couple of hours later to find the boy, Danny, who had fled an abusive stepfather and an overburdened and impoverished mother. Hodes examined Danny at the clinic and then, as is his custom, snapped a photograph of the boy, telling him to smile. His explanation to Berger: "This isn't just a back. This is a soul." That would become the title of the book Berger would eventually write. William Morrow published This Is a Soul in hardcover in 2010; it came out in paperback in April.

Before meeting Danny, Berger had never become personally involved with a story. But something about the boy haunted her. "I just saw this kid," she recalls, "and thought Rick could help him." Hodes took Danny into his home and arranged for him to have spinal surgery in Ghana. Berger happened to be returning to Ethiopia, so she stopped in Ghana to visit Danny after the eight-anda-half-hour operation, bringing him a few simple gifts—a book, a pen, a teddy bear. By then, she was beginning to admit to an unexpected emotional connection. A few months later, Hodes told her he was coming to New York City on a fundraising trip. Why not bring Danny along, she suggested. It'll help him learn English. The visit evolved into an extended stay with Berger and Hewitt—and, eventually, a permanent home. Danny didn't want to return to Ethiopia, and they didn't want him to leave. "He was happy with us," she says. "How could we send him back? He just fit in, like a key in a slot."

A student visa allows Danny to remain in the U.S. as long as he goes to private school. Since Ethiopian law prohibits people from adopting children more than forty years younger than themselves, Danny has not been legally adopted; Hodes remains his legal guardian and, like a number of other Ethiopian children, Danny took the last name of the doctor who saved him. Thus he is Danny Hodes, but there is even serendipity in his initials, as he can make use of Don Hewitt's monogrammed possessions. Just a week after Danny's arrival in New York, Hewitt was diagnosed with pancreatic cancer; he passed away in August 2009.

Now it is Berger and Danny in the spacious Central Park West home—in a building whose residents include the likes of Bono and Steve Martin. It is surely an exceptional childhood. Yes, Berger reads to him, tosses a baseball around in the park, tucks him into bed. But occasional dinner companions include Alan Alda and Candice Bergen. When Danny and his "mom" traveled to Universal Studios in Los Angeles last winter, they had dinner with the studio's president, Ron Meyer; the other guests included Julia Roberts.

That chance encounter in Addis Ababa—which turned a hopeless existence into a life of comfort and promise—was a much-needed stroke of luck for Danny, now straight-backed and constantly smiling. But Berger has discovered that good fortune can be a two-way street. "It didn't occur to me that he would fill a hole in my life," she says, "but he certainly does."