Standing on the rim of the crimson-hued canyon on a March day in 1998, David Goodyear '73, MEng '74, could hardly contain his excitement. As he surveyed the landscape, his mind raced with possibilities. Some 1,600 feet away from the legendary Hoover Dam, the structural engineer had a chance to carve a bit of history out of the unforgiving rock. "I was like a kid in a candy store that day," Goodyear recalls. "As a bridge designer, you consider yourself tremendously fortunate to have a site like that. It's a once in a lifetime experience. In this business, that's what you live for." 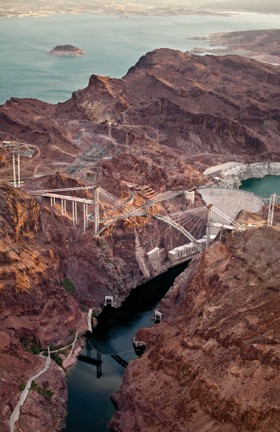 It would take another dozen years before he finally saw the finished project: a 1,900-foot-long, eighty-eight-foot-wide concrete ribbon, perched 890 feet above the deep blue Colorado River running between Arizona and Nevada. Opened to traffic in late 2010, it has been proclaimed a triumph of modern engineering. It is the longest and tallest concrete-arch bridge in the Western Hemisphere and the second-tallest bridge in the United States (after the Royal Gorge Bridge in Colorado), and its concrete columns are the tallest in the world. It has become an instant tourist mecca, with visitors taking the undulating pathway to a pedestrian lane that runs the bridge's length.

The centerpiece of a $240 million construction project, the Hoover Dam bypass bridge was built to shift vehicles away from the dam and speed traffic between Las Vegas and Phoenix. Commercial vehicles, blocked from using the dam bridge since the 9/11 attacks, would no longer be forced to take a seventy-five-mile detour. The project would also improve safety for motorists navigating the twisty, narrow, congested two-lane dam roadway by shunting traffic to new stretches of U.S. Highway 93.

Goodyear, chief bridge engineer and senior vice president at the San Francisco-based civil and structural engineering firm T.Y. Lin International, began assembling a team to bid on the project in 1999 and was picked for the job about two years later. He soon settled on a concrete-arch bridge, a cheaper, sturdier, and more aesthetically sensitive choice than a steel suspension span. "The idea was to complement the dam," says Goodyear, who has helped create more than 100 bridges during his three-decades-long career. "This was the most sensible place to build a concrete-arch bridge, if you were ever going to do one. It just works."

But there were some serious concerns that would shape the design. Initial reports about the potential for epic earthquakes were "quite alarming," Goodyear says, and wind speed projections were daunting. As a result, the bridge was built to withstand a 1,000-year earthquake and winds that are 25 percent stronger than the industry mandates. Carved into Black Canyon, the span presented design challenges Goodyear had never before encountered; for example, its concrete mix underwent extensive study to see how it would perform after the bridge was set into place.

The design process took a full year, and execution was delayed by funding uncertainties. When it finally got started, it was an arduous construction job involving more than 1,200 workers and nearly 400 engineers working in high winds and searing desert temperatures. At one point, the project was delayed for eighteen months when winds reaching sixty miles per hour toppled a construction crane; in a separate incident, a worker was killed in an accident involving a hydraulic jack. In the end, despite the challenges, the team brought the two ends of the bridge together with remarkable accuracy, off by just a few eighths of an inch. "It was a long time coming and it's gratifying to see something work out so well," says Goodyear, who was among the throng of dignitaries and visitors on hand for the dedication last October. "But it's like when your kids leave home. You think to yourself, OK, now I have to find something else to do."