Like many little girls, Thevaki Thambirajah loved playing with her mother's makeup. She still enjoys eye shadow and lipstick, but now it's her business. Frustrated that major cosmetics brands didn't complement the tone and texture of her Sri Lankan skin, she designed her own line and dubbed it Thevi, her nickname. 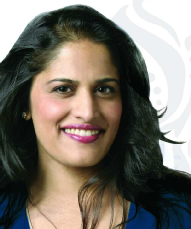 She established her business in New York City in the fall of 2008 and began selling her products online. Now she's working to get her makeup into retail stores and create a nationally recognizable brand geared toward South Asian, Hispanic, Middle Eastern, and Mediterranean women—what she calls the "new ethnic market." Thambirajah says cosmetics companies haven't been serving these women, who have different skin types and tones than Caucasians and African Americans. Her collection's color palette includes dark green and red eyeshadow; brownish-red and wine lipsticks; and almond, honey, and mocha powders. "I want to offer more customized products as well as a better experience, so their needs are catered to," she says. "A lot of the influences are from ethnic lifestyles where people aren't scared of color—it's an expression of their personality and the richness of their traditions."

A business major in CALS, Thambirajah has worked for Citibank and the cosmetics companies Revlon and Coty. As she continues to expand her business, she says she tries to keep in mind what sparked her passion as a little girl—that makeup should be fun and empowering. "It's an expression of a woman's soul and emotion," she says. "I wanted to celebrate that."

Feeling unsatisfied in his job as an analyst for an investment banking firm, Robert Profusek dreamed of getting into the entertainment business. So he teamed up with Ryan Silbert, who was working in public relations, to launch the New York-based film production and marketing company PS Pictures. One of their first efforts: a short documentary called Push Button House, which debuted in 2008. The eleven-minute film, which was screened at the Museum of Modern Art, chronicled artist and architect Adam Kalkin as he created a living space—a kitchen filled with espresso makers promoting the Illy coffee brand—that emerged from a rusted shipping container at the push of a button. "This isn't a marathon," Profusek says of film production. "This is a sprint throughout an entire marathon."

PS Pictures has since had short films screened at Sun-dance, Lincoln Center, the Berlin International Film Festival, and on HBO. Their first feature, Holy Rollers, is set to come out this year. The true story of two Hasidic Jewish youths who smuggle Ecstasy into America, it stars Jesse Eisenberg of The Squid and the Whale and Justin Bartha of National Treasure. "At points it's been like drinking from a fire hydrant," Profusek says. "Production is hard. Anybody who goes into filmmaking for the glitz and glamour is definitely in it for the wrong reasons."