The documentary The Philosopher Kings elicits life lessons from an unconventional corner of academia: university janitors. On the Hill, the filmmakers found two such sages in Jim Evener and Gary Napieracz. The veteran custodians share their views about the world—and the unexpected joys of a seemingly humble job. “Life throws a lot of things at you,” Evener says in the film, “and there’s a lot of curves in the road.”

A documentary seeks lessons from an unconventional corner of academia: university janitors 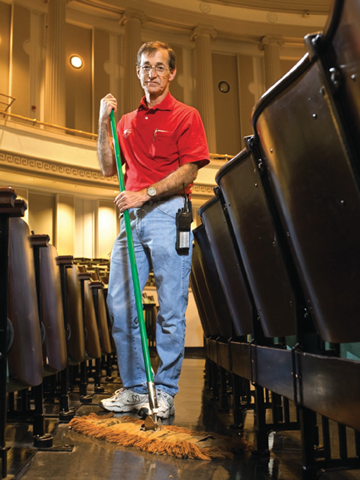 There's an adage about CIA agents: if they do their jobs right, you never know they were there. The same could be said of Cornell's custodians— those unsung heroes who, clad in bright red polo shirts, keep campus classrooms, libraries, and labs tidy day after day. Some 300 people are employed by Building Care, the department that looks after the Hill's 9.5 million square feet of academic facilities; another 120 or so work for Campus Life, which cleans dorms and dining halls. "Our folks arrive on campus and leave almost in a stealth fashion," says Building Care director Rob Osborn. "We're not waving flags about what we do; the average person is not aware of what goes on behind the scenes. On the other hand, if the buildings are not clean—people notice that very quickly."

In an institution of higher learning, custodians aren't at the bottom of the academic ladder; they don't even have a rung. But a new documentary film aims to turn that hierarchy on its ear. Entitled The Philosopher Kings, it explores the personal and professional lives of janitors at such universities as Princeton, Duke, and Cal Tech. Only one school —Cornell—has two representatives: Jim Evener and Gary Napieracz, close friends who are both Vietnam veterans, live five miles apart, and share a love for a job that has them setting their alarms for 2 a.m. every work-day. (Actually, Napieracz is the late riser of the pair: he gets up at 2:30. 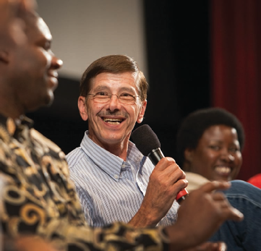 Directed and co-produced by Patrick Shen and shot on a $175,000 budget over the course of a year, The Philosopher Kings features eight custodians—chronicling the challenges they've overcome and eliciting the life lessons they've gained in the process. "The idea was to seek wisdom from those we consider to be on the fringes of society and to point out that intelligence is not exclusive to classrooms, professors, or those we normally attribute to be the wise people in our culture," Shen says. "We set out to tell their stories, to bring humanity and dignity to people we don't normally see."

'We set out to tell their stories,' says director Patrick Shen, 'to bring humanity and dignity to people we don't normally see.'They include Josue Lajeunesse, who cleans the Princeton campus by day and spends his nights driving a cab so he can support his family back in Haiti, where he's also funding a project to supply villagers with clean water. And Corby Baker, an aspiring artist who took a custodial job at Seattle's Cornish College of the Arts so he could be around creative people, one way or another. And Luis Cardenas, a Cal Tech custodian who lost an arm in a car accident—the fault of an uninsured drunk driver he declined to sue—and struggles with basic tasks like changing trash bags, but takes solace in his contented home life. And Melinda Augustus, the film's sole female subject, who talks about how she loves to watch the butterflies at her workplace, a University of Florida natural history museum—and how traumatized she was at the loss of her mother, who was put into an irreversible coma by a medical error while giving birth to Augustus's youngest sibling.

Evener, who emerges as one of the film's lead characters, was actually not included in the initial round of casting. Co-producer Greg Bennick had asked each university to provide four potential subjects for phone screenings; one of them was Napieracz (pronounced "Napier"), who was chosen to represent Cornell and interviewed by the filmmakers. "They asked me what was the most important or dramatic part of my life, and I said, 'My parents dying . . . and Vietnam,' " recalls Napieracz, who has worked in Building Care for twenty-four years and plans to retire next year. "We started talking about the war and I said, 'Let me tell you, I'm not the perfect person to be interviewed about Vietnam. I have a good friend who's a hero in my eyes.'" 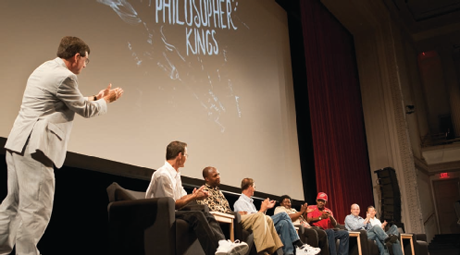 He introduced them to Evener, who wound up having a much more prominent role in the film; Napieracz is quoted several times but doesn't get the same biographical treatment as the other custodians. "Gary was a little more reluctant to share intimate details about his life," Shen explains, "whereas Jim completely opened up to us and held nothing back." That candor includes, in the movie's section on relationships, describing the moment when he came home from work one Mother's Day, gave his wife of twenty-eight years her gift—and she handed it back to him, announced she was leaving him for another man, and was gone the next day. It was, as he tells the filmmakers, "probably one of the few times that I just did bawl my eyes out."

He also talks about his Army service in Vietnam, where he was shot in the back while on a mission to resupply ammunition for a Marine sniper division. "It was like somebody poked you with a punch, between that and an electric shock," he says, filmed in the cavernous setting of an empty Bailey Hall. "I didn't go flying over any logs or through the air like you see on TV." Unable to walk, he spent three days pulling himself through the jungle by his arms; he passed out, and the next thing he knew he was in a hospital in Japan. Although doctors doubted he'd walk again, he kept getting out of bed behind the nurses' backs—and eventually took a step. When he came home on a two-week leave at Christmas, his parents were shocked: they'd gotten the letter informing them he was missing in action, but not the one saying he'd been found. "I know I shared some personal stuff, but it's not stuff that other people haven't gone through," says Evener. "If it helps somebody know that if you work at it you can get out of almost any situation, I feel absolutely fantastic about it."

The Philosopher Kings isn't just a litany of trials and tribulations; Shen also gets his subjects to open up about the things that bring them joy. Napieracz, who works at the Vet college, describes how he takes pride in comforting students and residents who've lost an animal in their care, often offering a brownie or a cup of tea. Evener, an assistant supervisor, recalls how he made the nationals three years running during his days as a rodeo rider. Filmed rehearsing with his country and classic rock band, he remembers how, as the bass player for a group called the Royals, he opened for the Beach Boys before a crowd of more than 60,000. "Life throws a lot of things at you, and there's a lot of curves in the road," he says in the film. "You just have to make up your mind which one you're going to take, and that determines what kind of a person you are."