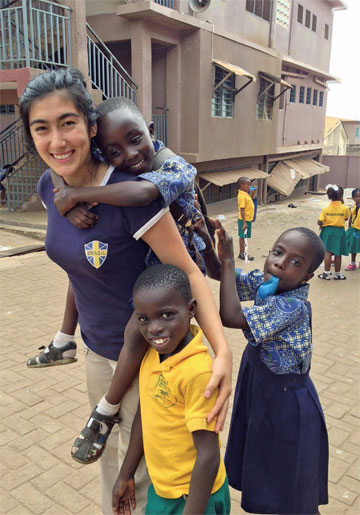 In New Zealand, at the boundary between two of Earth’s great tectonic plates, an engineering student explored the effects of earthquakes on the surrounding area. Just months before the British elections, a government major watched Prime Minister David Cameron field questions from Parliament—and insult the opposition—during a rowdy convention in Oxford. A communication major spent the summer in Tanzania, volunteering at a health clinic and developing recommendations for policies to reduce teen pregnancy rates.

Ever since the University’s founding, Cornellians have been venturing far from the Hill to study—and these days, that business is booming. More students, from a wider array of majors, are going abroad than in past years, and they’re having a kaleidoscopic variety of experiences. “There are now programs and opportunities for pretty much any major to do something abroad,” says Cornell Abroad director Marina Markot, who notes that more academic departments—such as engineering disciplines—have become receptive to the idea that exposure to another culture adds value to their students’ education.

The number of countries where Cornellians study has increased dramatically, Abroad officials say, from roughly twenty in the mid-Eighties to about ninety now. A significant portion of the Class of 2014—38 percent—had international experiences by the time they graduated, and the University is aiming to increase that: two years ago, a task force within the Global Cornell initiative set a goal of 50 percent. “A growing trend is toward more programs with practical, hands-on experience,” Markot says, “like fieldwork, experiential learning, service, or internships—not just classroom learning.”

Decades ago, when travel was more logistically difficult, students often stayed away for an entire academic year. Now, most choose semester-long programs, and even shorter stints over summer or winter breaks are gaining popularity. Gender demographics have also shifted: while males were once more likely to study abroad, now about 70 percent of those who go are women. (There’s much speculation as to why, Markot says, with one theory being that male students prefer to travel on their own.) “I was looking for adventure, and I definitely found it,” says Joanna Barrett ’16, who spent the summer before junior year volunteering with a nonprofit in Kenya. “There were so many situations where I had no clue what I was doing and just had to figure it out—and I’m so glad I had to. I’m so much more confident and poised than when I came to Cornell, and I credit my time abroad for a lot of that.” 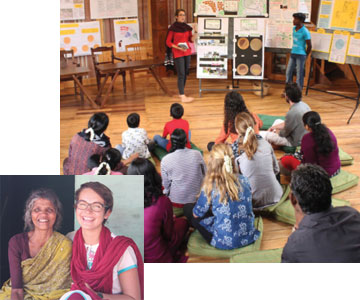 For all the University’s abroad programs, Markot says, safety is paramount. Standard practice includes keeping abreast of State Department recommendations and contracting with a private firm for security briefings and emergency medical care. In addition to offering pre-trip guidance, from tips on safe drinking water to information about the political climate, the Abroad office keeps track of every Cornellian studying internationally. When crises occur—be they an earthquake in Nepal or a terrorist bombing in Paris—staffers can quickly make contact and, if necessary, arrange for the students’ return, as was the case during the 2011 Arab Spring uprising in Egypt. Markot points out that such situations are rare, however, and students almost always opt to stay if the situation allows. (After the Nepal earthquake, she notes ruefully, students wanted to stay longer and offer assistance, “but we had to tell them that relief efforts were going on, and untrained individuals are not necessarily helpful.”)

The ideal abroad experience, Markot says, combines robust academics with opportunities for personal growth—giving students the chance to get into their new community and out of their comfort zones. “I cannot overstate how well my time and efforts were rewarded,” says Hanna Reichel ’17, whose aims for her semester in India included improving her research practices and experiencing new cuisine. “Is it too trite to say it was everything I hoped and dreamed for—and more?”

Here’s what you missed from our print edition, the best way to see the images and stories our globetrotting Cornellians shared with us. Subscribe to Cornell Alumni Magazine to see these stories in print, as we design them to be read!