Rumors of Ato Essandoh’s death have been highly exaggerated. 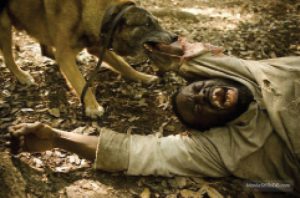 After the prolific actor and 1995 alum had a small but pivotal role in the 2012 Quentin Tarantino drama Django Unchained—playing an escaped slave whose evil master has him ripped to pieces by vicious dogs—a persistent Internet rumor held that his on-screen death was real. As the meme claimed: in service of his art, Essandoh had signed a document agreeing to be killed on camera—and was pronounced dead by Leonardo DiCaprio, who played his murderer. “A friend sent me the link, and I thought it was the dumbest thing I’d ever seen,” Essandoh recalls with a laugh, chatting with CAM last spring in a café near Manhattan’s Theatre District. “But as I was about to click away, I saw it had like 500 comments. ‘That’s against the law! They should throw Quentin Tarantino in jail!’ And I thought, These people believe this!”

So Essandoh decided to have some fun with it. He started tweeting responses from the afterlife, including requests for beer and the happy news that one of his neighbors in heaven was Jimi Hendrix. “It went on for a number of years,” he says. “Every once in a while, somebody will be like, ‘Hey, are you alive?’ ”

For Essandoh, it was just another twist in an unlikely journey that began on the Hill—where he both majored in chemical engineering and got his first taste of acting. The son of Ghanaian immigrants, he grew up near Albany and in suburban New Rochelle, New York. Matriculating into the Engineering college, the performing arts never crossed his mind. But junior year, a girlfriend convinced him to try out for a play, a production by the Chinese Students Association that explored issues of diversity and assimilation. “I’ll never forget coming on stage and hearing people laugh, feeling them connect, hanging on every word we said,” says Essandoh, who played an African American man on a blind date with an Asian woman. “That’s an amazing power, telling a story that they’re listening to. I really think that’s the core of—dare I say—human existence. We all tell each other stories.” While he didn’t do any other shows on campus, the role was “the little crack in the dam that I kept thinking about.”

Essandoh completed his degree, but tossed out his grad school applications; he took a nine-to-five job in technical sales in Rhode Island and tried to figure out what he wanted to do with his life. He studied French, took SCUBA lessons, traveled. “Acting,” he says, “just kept coming back.” A software consulting gig allowed a transfer to New York City, where he took classes at the Acting Studio under a protégé of legendary teacher Sanford Meisner. “To my parents’ credit, they didn’t disown me,” he says of telling his family that he was devoting himself to his craft. “They saw how much I wanted it and how hard I was working.”

His first TV role was as an injured bike messenger in a 2001 episode of the NBC drama “Third Watch.” (“My lines were like, ‘Ahh! Ahh!’ ”) In 2003, he marked the New York actor’s rite of passage: a role on “Law & Order.” (He went on to appear in a second episode as a different character, and also worked on “Criminal Intent.”) The following year, he played Natalie Portman’s adopted African brother in the hit indie film Garden State; in 2006, he was a Sierra Leonean revolutionary in the Oscar-nominated Blood Diamond. Around that time, he stopped having to take non-acting jobs to pay the rent—but all in all, it took fifteen years of pounding the pavement until he felt like he was truly a working actor. “Luckily, my career has always gone up,” he says. “There’s never been a real lull. But there’s always me hustling and trying to get work.”

His first “series regular” gig was playing a doctor on BBC America’s “Copper”; the show, set in New York’s rough Five Points neighborhood in 1864, ran for one season in 2012–13. Essandoh has had a recurring role on the Sherlock Holmes reboot “Elementary,” as the protagonist’s Narcotics Anonymous sponsor, a master thief. On “Vinyl,” the one-season HBO series, set in the New York rock scene of the 1970s, that was created by Martin Scorsese and Mick Jagger, he played a blues singer—and surprised the producers with his skill on guitar and vocals (which they’d planned to dub). He’s had another recurring role on “Blue Bloods,” playing an activist preacher who’s a thorn in the NYPD’s side, and yet another on “Chicago Med,” as an Orthodox Jewish surgeon with Asperger’s syndrome. He was in all ten episodes of the recent Netflix sci-fi series “Altered Carbon,” playing a former Marine medic avenging his wife and daughter. In the 2016 action film Jason Bourne, he was the right-hand man to Tommy Lee Jones’s malevolent spymaster—and got offed by Matt Damon himself. 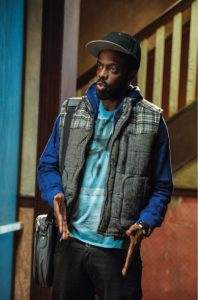 And in his recurring role on “Elementary.”CBS Television Studios

Meaty roles, one and all—and far from the sorts of parts stereotypically offered to African American men. “Somehow, I lucked out,” Essandoh says. “From the beginning I’ve played roles that are different—a doctor in the Five Points, a blues singer. I dodged the stereotype bullet, the compartmentalization bullet. I feel like I’ve ridden a wave that has now met this whole renaissance in roles available to people of color, as well as to women. There’s much more work to be done, but I’m happy to see that progress.”

Next year, Essandoh has a part in Marvel’s latest X-Men movie, Dark Phoenix. But don’t ask him about his role; having signed a stack of non-disclosure agreements, all he can say is that he has a few scenes (and that he shot them in Montreal). But his biggest career boost yet may come with the next TV season, when he has a lead in the new CBS series “The Code.” On the show, which he describes as “an updated cool version of ‘JAG,’ ” he plays an attorney who’s a major in the Marine Corps. When Essandoh met with CAM, he’d only recently gotten the news that the pilot had been picked up—and his next stop was interviews with People and Entertainment Weekly. “Chemical engineering was so hard, it gave me a work ethic that I still enjoy today,” Essandoh observes with a smile. “Actors always get asked, ‘How do you memorize all those lines?’ And I’m like, ‘Number one, that’s the easiest part—and number two, I went through organic chemistry at Cornell.’ ”

One thought on “On a Role”