After you click "buy," Cornellian-designed robots help bring your stuff to your doorstep

After you click "buy," Cornellian-designed robots help bring your stuff to your doorstep

Inside a manufacturing and demo facility in an office park off Boston's Route 128 tech corridor is a tongue-in-cheek sign: "Please Do Not Feed the Robots." It's a joke, of course, but you can see why visitors would be tempted to throw treats: these spinning, scurrying automatons with the squat orange bodies and the glowing blue lights that pass for eyes are as anthropomorphic as they are adorable.

The cavernous space in North Reading, Massachusetts, is home to Kiva Systems, makers of a state-of-the-art "mobile robotic fulfillment system." Its creations-roughly two feet square and a foot tall-are worker bees that retrieve merchandise from e-commerce warehouses. If you shop online, chances are good that a Kiva robot has fetched something for you; the firm's clients include such merchants as Walgreen's, Crate and Barrel, the Gap, Staples, Office Depot, and diapers.com. In March, the company was taken over by the ulti­mate e-commerce behemoth, when Amazon.com announced it was buying Kiva for a whopping $775 million. 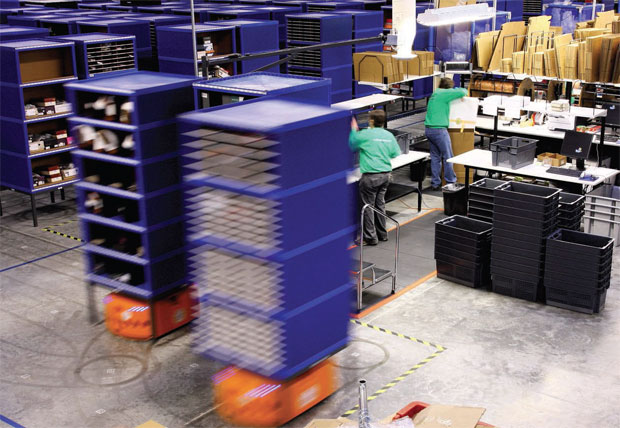 If the Kiva robots look vaguely familiar to Cornellians of recent vintage, it's no accident. The firm's technical co-founder is Raffaello D'Andrea, a former engineering professor who oversaw the Big Red's Robocup robotic soccer team from the late Nineties to the mid-Oughts. Cornell took home the international Robocup trophy four times-including in 1999, the first year it entered. Its players are the Kiva robots' spiritual ancestors, if not their direct technical progenitors, and a hefty portion of the company's early hires were Robocup veterans. "It was a natural fit," says Eryk Nice '02, MS '04, who was on the championship squad his senior year (and still has a Robocup flag in his Kiva office). "One of the great things about Robocup was that it was a comprehensive systems engineering program where we had electrical engineers working with mechanical engineers working with software engineers, and they all had to come together." Software product manager Steve Wilson '08 estimates that when he and his twin brother, Andrew Wilson '08, interned at Kiva between their junior and senior years, "of thirty employees, about half were from MIT-and a third were from Cornell." The firm has since grown to some 300 workers, about a dozen Big Red alums among them. As Peter Blair '90, Kiva's senior director of marketing, puts it: "There's a lot of Cornell DNA in the company, the product, and the technology." 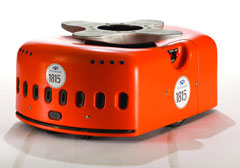 The Kiva system streamlines a necessary but burdensome aspect of e-commerce: what happens between the time you click "buy" and your goods land on a delivery truck. From a vast warehouse, someone (or something) has to gather the items in your order-the T-shirt and the blender, the vitamins and the iPad case-and put them in a box. That can be a complex and expensive proposition for retailers, and a misery for workers. Over the past couple of years, allegedly poor conditions in fulfillment centers-from heat-stroke-inducing temperatures to Sisyphean productivity quotas-have made headlines. In its March/April issue, Mother Jones published  "I Was a Warehouse Wage Slave," a damning report from the front lines of an unnamed company describing "picker" shifts that entailed twelve miles of speed-walking on concrete, punctuated by back-breaking bending and lifting. "With Kiva, the whole component of walking is taken over by robots," says Blair. "Instead of people walking around a warehouse, which might take twenty minutes to find five items, they pick those same items in a minute and a half because everything is brought to them."

And increasingly, time is profit in e-commerce-as consumers shopping from the comfort of their couches demand near-instant gratification. "Five years ago, you ordered something and it would show up next week, and that was okay; today if it takes more than forty-eight hours you're ticked off," Blair says. "Or think of free shipping. It used to be a big deal, but now it's almost expected. In another year it'll be standard to get free shipping-and in the future it will be free next-day shipping. Our expectations are heightened as we get used to the e-commerce world."

In other words, shoppers will want to receive their goods faster than humanly possible-literally. With the Kiva system, workers at packing stations call up each order, but the robots do the legwork. They scurry around the warehouse to the mobile shelves stocked with the desired items, their movements guided by finely honed software (and tape marks on the floor). When each robot reaches its destination, it slides under the shelf and whirls around to turn a screw that lifts the entire shelving unit off the floor, then brings it back to the packing station and waits in line. When a robot reaches the front, a red light points at the correct slot on its shelf; the worker then scans the item and puts it in the shipping box, and the robot returns the shelving unit to the warehouse. "The robots will come to intersections and wait or move depending on what's going on around them; it's an orchestrated dance," Blair says. "One of the fun things about this job is showing the robots to people. Their first reaction is, ‘This can't be real. When are they going to crash into each other?'  And we'll say, ‘You can stand here and watch all day. They're not going to crash.'"