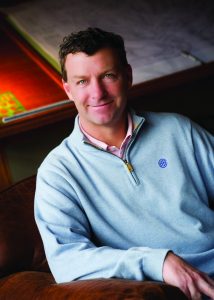 Seven years ago, when the International Olympic Committee announced that 2016 would mark golf’s return to the Games after more than a century’s absence, many fans saw it as a potential global showcase— a chance to reach countries not yet enamored of the sport. But there was a major hurdle to overcome: Rio de Janeiro had no Olympic-caliber course, just an earmarked piece of land adjacent to a lagoon.

For one lucky golf course architect, this would offer a golden opportunity to design eighteen holes for an audience of millions. A parade of renowned designers competed for the commission, including Robert Trent Jones Jr.—son of the Cornell-trained icon who designed the University’s course—and former superstar players Jack Nicklaus, Gary Player, and Greg Norman. Gil Hanse, MLA ’89, decided to throw his hat in the ring, knowing full well he was a long shot. “Within the golf cognoscente we were well-known and respected,” he says of his three-person firm, “but outside of that, there weren’t many people who knew who we were.”

Hanse’s small operation was aiming to take on an Olympian assignment: to create, in a relatively short time and in a developing country, a logistically and economically feasible layout that was tough enough to challenge the world’s top pros, yet also playable by amateurs as a post- Games public course. The project, Hanse hoped, would also offer a chance to showcase a model of environmentally sustainable course design on an international stage. 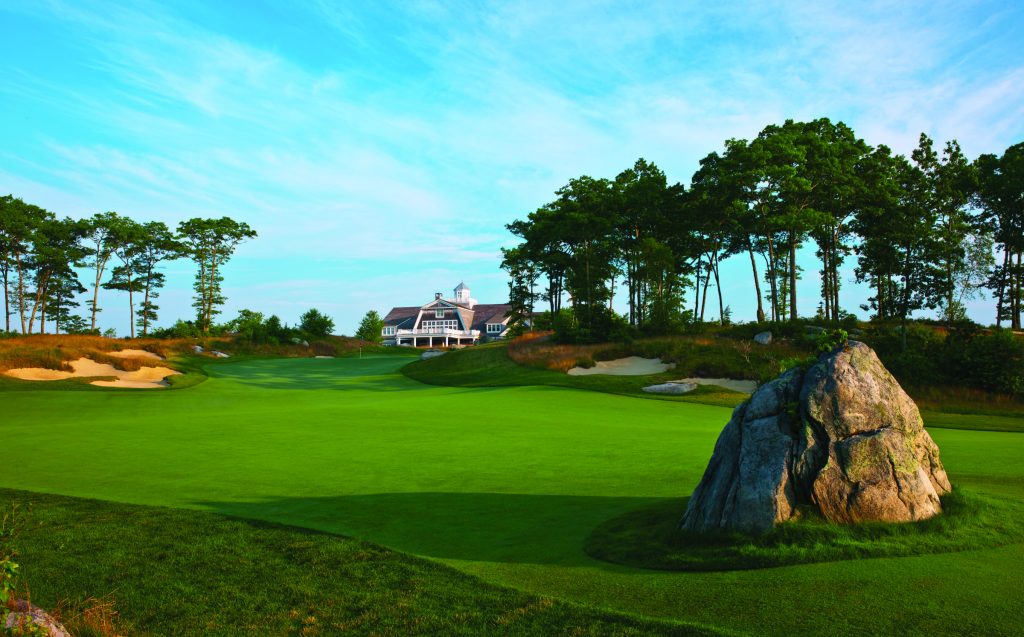 Hanse’s mentor, Tom Doak ’82, has long been a pioneer of golf architecture’s minimalist movement, which prioritizes working with a site’s natural features and maintaining its local character rather than imposing an arbitrary design concept on the land. If the terrain has a severe slope, for instance, a minimalist will attempt to turn that into a compelling feature of the hole or at least conceive a sequence of holes that avoids the slope entirely, rather than reshaping it with a bulldozer. Doak believes that what he calls “restraint in earthmoving” can have a positive effect on both the environment and the bottom line.

Doak had hoped to get the Olympic job, too—and his firm made it to the final cut of eight, as did Hanse Golf Course Design. Then Hanse tapped faculty expertise in Ithaca, where CALS’ Department of Landscape Architecture—established in 1904, the same year golf last appeared as an Olympic sport—has churned out an impressive series of highly regarded course architects. Hanse contacted Frank Rossi, PhD ’92, an associate professor of horticulture who teaches a turfgrass science class called Grassing the Urban Eden. Rossi also oversees the Bluegrass Lane Turf and Landscape Research Center, located just a chip shot away from the fifth hole of the University’s Robert Trent Jones Golf Course.

The high-energy Rossi is a bit of a mad scientist of golf course maintenance. He experiments with innovations like robotic mowers, irrigation sensors, and environmentally sustainable grasses, and studies such topics as the effect that shoe spikes have on greens and the potential of maintaining a course without pesticides. Increasing concerns about courses’ water and energy consumption, labor and maintenance costs, and longterm environmental impact, he says, have made it necessary to “reimagine how we view golf.” Recently, his efforts have caught the eye of course designers like Hanse, who recruited him to his Olympic team. 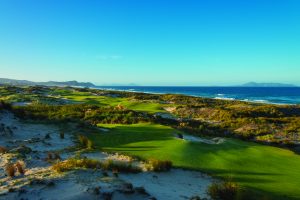 In sum: Hanse’s proposal featured an aesthetic honed by a broad education in landscape architecture; it offered the economic and environmental advantages of his minimalistic approach; and it drew on Rossi’s horticultural acumen. What’s more, Hanse underscored his commitment to the project by pledging to relocate his family to Brazil so he could personally oversee construction. In March 2012, with a camera crew watching, Hanse took a phone call informing him that he had the job.

A year later, he broke ground in Rio. And this August, when his course tests the talents of five dozen of the finest golfers on the planet, the world will be watching. “Sometimes it’s amazing; when you tell people what you do, you get these blank stares,” Hanse says with a laugh. “They say, ‘I guess I never really thought about anyone designing golf courses.’ They think they just pop up out of nowhere. But there are layers of complexity.”

Consider the many issues that must be addressed—the first of which is whether the land can be fashioned into a course at all. Then an architect must consider the clientele: Is the course public? Private? Part of a resort? A pro tournament host? And the climate: What are the prevailing winds? What’s the elevation? What kind of foliage and grass should be planted? And each hole: How should the fairway be shaped? Where should hazards be located? Should the green be elevated? Terraced? Tilted?

And, of course, the routing of the eighteen holes has to be logical. Each green must lead to the next tee, the first and final holes must be somewhere near the clubhouse, and there should be the right mix of par-threes, -fours, and -fives. World Golf Hall of Fame architect Robert Trent Jones, Sp Ag ’28–30, once described the process as “putting together the pieces of a jigsaw puzzle.”

To equip himself to solve such puzzles, Jones had formulated his own Cornell education. Although he didn’t even possess a high school diploma, he matriculated in 1928 as a twentytwo- year-old special student given the freedom to design hisown curriculum. He studied landscape architecture (then in the College of Architecture, Art & Planning), hydraulics and engineering in the College of Engineering, and horticulture and agronomy in CALS, as well as courses in public speaking, journalism, economics, and business law. As James Hansen wrote in his book A Difficult Par: Robert Trent Jones Sr. and the Making of Modern Golf: “Jones may not have received a degree from Cornell, but he got what he went for—the advanced education and fundamental knowledge needed to design and build golf courses.”

By the time of his death in 2000 at age ninety-three, Jones had built or renovated more than 400 courses in nearly every state and dozens of countries. He always insisted that imagination— seeing a wild stretch of land and envisioning a blissful, eighteen-hole stroll—was key to turning technical expertise into something exquisite. “Making golf holes,” he said, “is more art than science.” His impact was so global that it has been said that the sun never sets on a Robert Trent Jones course.

On the Hill, Jones’s talents can be appreciated first-hand in the eighteen-hole course he designed and that bears his name, as well as in the massive Robert Trent Jones Collection donated to Kroch Library in 2009. But it is also evident in the legacy he established in CALS as an incubator of course design talent. “I don’t think there’s another landscape architecture department that has had such an impact on our business,” says Chris Monti ’96, a senior associate with Florida-based Bobby Weed Golf Design. The department, Monti notes, has become a magnet for aspiring course designers, thanks not only to Jones’s fame, but its mission to produce socially responsible and creative alumni, emphasize conservation, and allow students to tailor the program to their individual interests. “That philosophy resonates immediately with any high schooler interested in golf course design, because you can’t find a golf course design major,” says Monti. “So the next best thing is a prestigious school that allows you to study laterally, as it were. And you’re following in the footsteps of some of the great practitioners of the profession.”

‘When you tell people what you do, you get these blank stares,’ says Gil Hanse, MLA ’89. ‘They say, “I guess I never really thought about anyone designing golf courses.” They think they just pop up out of nowhere.’

Of the many prominent Cornellian golf architects who have come after Jones, the most renowned of the current generation is Doak, who has designed several courses ranked among the world’s 100 finest (Oregon’s Pacific Dunes is widely considered his masterwork). Doak has written four books, including The Confidential Guide to Golf Courses, which underscored his reputation as an iconoclast with an encyclopedic knowledge of the sport’s venues. Indeed, he claims to have seen every great course in the world, a process that began when he received the Frederick Dreer Award from CALS’ School of Integrative Plant Science in 1982. The award allows a student to spend up to a full academic year studying a horticulturerelated topic abroad—be it ancient irrigation in Morocco or tulip breeding in the Netherlands. Doak was the first to use the scholarship to study golf course architecture in the British Isles, a stint that included playing classic courses all over the UK and even caddying at the famed St. Andrews. Doak returned to land a stateside job with acclaimed course architect Pete Dye before founding his own firm, Michigan-based Renaissance Golf Design. Doak, who has been described as a game-changer due to his minimalist perspective influenced by studying classic courses, has hired several Cornellians as interns over the years; Hanse was the first.

Hanse had arrived on the Hill with a BA in political science from the University of Denver. Though he doodled golf hole designs on occasion, he was planning a career in public policy and initially focused his graduate studies on city and regional planning. But he ultimately turned down a summer job in a congressman’s office in favor of a gig at the Country Club of Ithaca. The next summer he worked for Doak, who was constructing his first course in Michigan. With his own Dreer scholarship, Hanse spent ten months touring the UK and interning at the world’s oldest continuously practicing golf architecture firm.

Hanse’s late epiphany about golf course design isn’t all that unusual among his Cornellian colleagues. Dave Zinkand ’97, for instance, originally enrolled in the College of Architecture, Art & Planning, but found himself drawn to landscape architecture and switched to CALS. He, too, studied overseas via the Dreer Award; he now runs Arizona-based Zinkand Golf Design, echoing the minimalist mantra that inspiration should come from what he calls “the genius of the landscape itself.” Gary Kaye ’89, BS ’90, graduated as a landscape architecture major who’d never played golf in his life. But for the past quarter-century, as the founder of Golf Engineering Associates, he has specialized in course irrigation systems, particularly in Mexico. Paul Albanese ’90, on the other hand, was captain of the Big Red golf team, majoring in environmental and agricultural engineering. He earned an MLA from Harvard and is now a principal with Michigan-based Albanese & Lutzke. In 2009, he and Rossi led a Cornell’s Adult University trip to Scotland entitled “The Lay of the Land: Playing the Courses Where Golf Began,” which included visits to six fabled links. “Golf course design has always been a ridiculously small profession where there’s no clear path in terms of training and entering the business,” says Monti. “It’s a very Darwinian exercise— and it needs to be, because there’s not a huge demand for what we do, especially now. I had a lot of friends go to Wall Street, while I found myself standing in ditches in Ohio. So you really have to want it.”