When Marc Davis ’94 tools around Austin, Texas, in his navy blue 1973 Alfa Romeo GTV, heads turn. Strangers have been known to snap photos of the snazzy sports car when it’s stopped at a light; others shout their appreciation from the sidewalk as he cruises by. But when Davis opens the hood—that’s when he really blows people’s minds. “They can’t believe what they’re seeing,” he says. “It’s like you’ve just shown them inside the Ark.”

While Davis’s car is vintage in most respects, it has a newfangled distinction: it’s powered not by gas but by state-of-the-art electric batteries. The computer science alum is the founder of Moment Motor Company, an Austin-based firm that converts classic autos to electric using batteries, reclaimed from wrecked Teslas, that are integrated into the vehicle using meticulous craftsmanship and innovative engineering, offering a range of about a hundred miles between charges. “We respect the car—our mantra is ‘First, do no harm,’ ” says Davis. “We’re trying to preserve that classic driving experience. We don’t cut up the vehicle or make massive modifications. We make it as noninvasive as possible; honestly, you’d have no idea that our cars are electric until somebody pops the hood.”

A peek under the car’s hood reveals its battery system.Provided

Turning a classic car into a plug-in electric vehicle is a bespoke process, and it’s not cheap; it generally costs between $50,000 and $150,000 (on top of the price of acquiring the car in the first place), depending on the model and whether it also requires restoration. Moment can currently complete about ten cars per year, with the ultimate aim of expanding capacity to fifteen or twenty. (While Davis paused operations for two months during Austin’s initial pandemic shutdown, his three employees have resumed work with COVID safety measures, and he says the economic slump hasn’t curtailed demand.) In addition to converting vintage vehicles, Moment also offers electric versions of reproductions; not only are they somewhat less pricey—$70,000 to $100,000 total—but they allow aficionados to own a replica of a model that would otherwise be all but unobtainable, like a James Dean-era Porsche Spyder convertible.

Since Davis founded Moment in 2017—after converting a client’s 1968 Porsche 912 in his home garage as proof-of-concept—the company has worked on a variety of vintage rides including a 1957 Porsche Speedster, a 1978 Datsun 280Z, a 1980 DeLorean DMC-12, and a 1987 Mini Mayfair. Part of Moment’s ethos is that getting there is half the fun: each car it works on gets its own password-protected blog, so the owner (along with their friends and family) can follow the progress of the project, which usually takes six to nine months. “We want to include our customers in the process,” Davis says. “It’s joyous and exciting for them, and it’s fascinating too. They’re embarking on this journey with us.”

Davis grew up near Ithaca, in the Village of Trumansburg; after graduation he worked in the software industry and later founded his own high-tech recruiting firm. But his love of all things automotive stretches back to early childhood. “It’s been an obsession from day one,” says Davis, whose first car was a 1973 Oldsmobile Cutlass Supreme he acquired in high school. “My mother loves to tell the tale of taking me into toy stores from when I was two or three and having me freeze up with excitement at the Hot Wheels and Matchbox sections.” 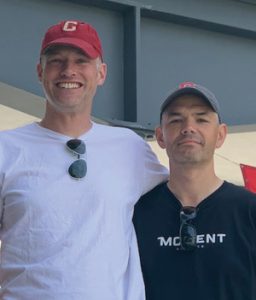 Since freshman orientation on the Hill, Davis has been best buddies with another gearhead: Geoff Raynak ’94, a mechanical engineering major who went on to earn a PhD in biomechanics from the University of Washington. (Their friendship even survived the time when Davis borrowed Raynak’s Ford Probe and crashed it in a snowstorm.) While Raynak has a full-time job as director of a product design program at Oregon State University, he works part time (and mainly remotely) as Moment’s head of engineering. “When a customer lifts up the hood of their car, we want it to look absolutely gorgeous,” says Raynak, whose bright red 1970 BMW 1602 recently underwent a Moment conversion. “We’re super proud of the craftsmanship. It doesn’t look like somebody hacked together the integration of an electric motor to the transmission. Every surface finish, every material choice, is intentional.”

As both Raynak and Davis acknowledge, Moment’s work doesn’t appeal to everyone in the vintage auto world, purists in particular. “There’s a subset of classic car aficionados who are deeply offended by what we’re doing. They feel that altering a car in any way from its original form is a tragedy that should be avoided at all costs—and they’re not our customers,” Davis says. “But far too often, these cars end up rusting away in garages or sitting in storage, unused and deteriorating. We’re getting these cars out on the road, doing what they should be doing—which is bringing happiness to their owners and the people who interact with them.” And, Raynak says, Moment’s approach is more minimalist than that of others in the industry. “You can do this in a way where you have the shell of the original but it’s driven by a completely different style of drivetrain; it’s not the same car,” he says. “We feel it’s important to preserve these cars as much as possible.”

The cars that Moment has converted include Raynak’s beloved red 1970 BMW (left).Provided

And, they stress, not only are plug-ins more eco-friendly than decades-old gas engines—built before modern regulations on emissions and fuel efficiency—they also eliminate some of the major stresses of owning a vintage auto. “Driving or riding in a classic car is an incredibly joyous experience,” Davis says. “But keeping the Rube Goldberg-esque machine that is a fifty-year-old internal combustion engine running is complicated and difficult, and it’s not for the novice. You endlessly have this anxiety of, ‘What’s that sound? Is it going to start again? Am I going stall at the light?’ It takes away the joy of driving the car when you end up on the side of the road waiting for a tow truck, and your spouse swears they’ll never ride in it ever again.” (And yes: he’s speaking from experience.)

By converting a classic car to electric, Davis continues, “we’re enabling people to have that wonderful experience without all those problems. You get into these cars and turn them on and they go. It doesn’t stink up your garage, it’s not endlessly going to the mechanic, and it doesn’t cause marital stress. It’s a work of art—and now it’s a car you can drive every single day.”

One thought on “Pedal to the Metal”