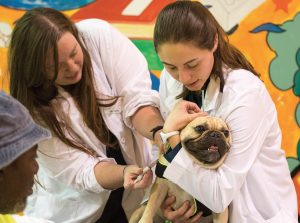 At the twice-monthly clinic, students vaccinate a French bulldog.

There’s a French bulldog named Bo, a Manx cat named Sweet Pea, and a mixed-breed pooch named Rumpelstiltskin who resembles a miniature pinscher. It’s a chilly Wednesday night in September, and along with a couple of dozen other furry friends, they’ve come—with their humans in tow—to be checked out by a cadre of vet student volunteers in one of the University’s most long-standing examples of community outreach.

Twice a month, on the second and fourth Wednesdays, the College of Veterinary Medicine hosts a healthy pet clinic at Southside Community Center in downtown Ithaca. For a mere $20 per animal—which goes directly to the community center—local residents who otherwise might not be able to afford medical care for their dogs and cats get a bounty of services: a physical exam; blood tests for conditions like heartworm and feline leukemia; basic vaccinations; a year’s worth of preventives to guard against pests and parasites; even (if the critters are cooperative) a complimentary nail trim. The owners can have microchips implanted for a small additional fee, and the students hand out application forms for the local SPCA’s low-cost spay/neuter clinic. “Out here, we see what we’re going to see in practice—different breeds of dogs, different temperaments, fractious cats and calm cats,” says Allyson Davis, a second-year student and one of the co-directors of the clinic, which marks its twentieth anniversary this month. “It’s great for our students to experience that. We get to talk to clients and be the person who solves problems, to really help and make a difference.”

Raising her voice to be heard above the cacophony around her, Davis admits that the scene in the clinic can come off as “controlled chaos”: some dogs are barking, some cats are yowling, dozens of people are talking, and the ventilation and fluorescent lighting systems in the Southside gym are making an unholy racket. Kids are running around, with one little boy in light-up sneakers doing figure eights on the hardwood floor. Against one wall, owners are lined up in chairs waiting their turn—grateful that they arrived in time to be seen before the clinic hits its nightly thirty-pet limit. “I’m always impressed at how well the animals do,” observes Brian Collins, DVM ’94, the vet lecturer who supervises the clinic. “When you think about all the dogs and cats out here in this open room with all these people, it’s amazing that very few of them lose their minds.”

Pets and owners wait their turn.

It may seem like a bit of a madhouse—but the vet students have it all under control. At each of seven exam tables, teams of at least two students—generally first- or second-years, who have more time in their schedules than upperclassmen do—are doing methodical physical exams, taking blood samples, conferring with clients, and administering vaccines for rabies, distemper, bordetella (kennel cough), and more. At another table, Davis and others are processing quick-response blood tests for heartworm, Lyme disease, feline leukemia, and the cat version of HIV; syringes filled with pastel-colored vaccines, recently reconstituted from powder, are arrayed on ice packs to keep cool. At an adjacent table are the preventives, all donated › to the Vet college, that the students collect after each exam and dispense to the clients, who tote them home in matching shopping bags. “It’s fantastic for the students, because they don’t get a whole lot of hands-on stuff at school; they don’t get to be in charge of much, and that is a great feeling to have,” says vet professor Lena DeTar, a shelter medicine faculty member who’s attending her first-ever Southside clinic. “It also makes you a little more honest about what you know and don’t know.”

Collins notes that at the Vet college’s teaching hospital, the faculty repeat each physical exam and check up on every decision a student makes; at Southside, by contrast, the veterinarians only intervene if the student doctors have a question. “The animals get care they wouldn’t otherwise, and the students benefit because they get the training—talking to clients and interacting with the animals and conducting themselves,” he says. “It’s amazing how professional they are even at this young age.”

Collins is off in a back corner of the gym, observing the students from a distance and weighing in when needed. At one point, second-year student Sarah Castle comes up and reports that one of her patients, a pitbull mix, has tested positive for Lyme.

“What can you tell me about how you get Lyme disease?” he asks, employing the Socratic method.

“And what happens when animals get sick from Lyme disease?”

“Yes,” he says, “the most common clinical sign is lameness. They also might be lethargic or feverish. They can get kidney failure; it’s less common, but it can happen. We can’t do anything about it here, but I recommend they do some research online. I believe in treating asymptomatic dogs before they get sick, but not all vets do. There’s no set protocol. So they probably should educate themselves, find a vet, and figure out a plan.”

The Southside clinic isn’t the Vet college’s only outreach to underserved communities. Twice a year, its traveling clinics go to other parts of the state; recent destinations have included Albany, Rochester, Buffalo, and New York City, and this fall they’re headed to the Onondaga Nation. Collins notes that since veterinary care is generally paid out of pocket, the trips and the Ithaca clinic allow the students to aid owners who may have far fewer financial resources that those they’ll typically work with during training and in private practice. “They’re seeing a part of the community that they may not see at the Vet school,” says Collins, a former Ithaca vet who’s also section chief of the college’s Community Practice Service. 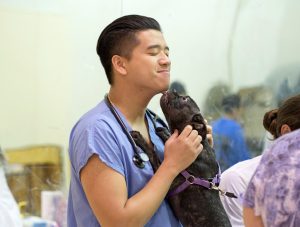 A student and his furry patient.

Each clinic runs from 6:30 to 9 p.m., with the line thinning out and the room quieting down as the evening goes on. At one point on this particular Wednesday, a hundred-pound greater Swiss mountain dog named Kona is splayed out on the floor, looking lazy but comfortable. When she gets up, she leaves behind a few blood splotches, having scratched off some scabs due to a flea allergy. Since the Southside events are “healthy pet” clinics, such conditions can be diagnosed but (beyond the distribution of preventives) not treated; as in the Lyme case, clients are advised to consult a veterinarian for follow-up. But Collins notes that just the existence of the Southside clinic may make owners more likely to seek continuing care. “If people can get the basics down—if they can go to the vet and say, ‘My animal has had these vaccinations and is on these preventives,’ there’s less fear of judgment,” he says. “Otherwise, people can be afraid to go.”

At a nearby exam table, Ithaca resident Kathleen Newport is cuddling her three-year-old Yorkie-schnauzer mix, Lexie. In a soft-sided carrier are the dog’s two tiny puppies, who are being examined and vaccinated before they go to their new homes. “It’s a great clinic,” says Newport, who has been coming to Southside for years with a variety of pets. “The students are very thorough, and the animals are getting the latest, greatest medicine. It’s reassuring that I can bring them here and afford it and not worry about it. The only downside is waiting in line and hoping you’re one of the first thirty, but I don’t mind that. You get in line and make friends. Pet people are great people.”