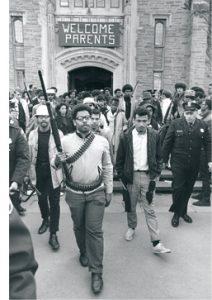 The classic image of the occupiers leaving the building after coming to an agreement with the University; Dawson was among them, holding not a rifle but a bayonet fashioned by taping a knife to a pool cue.

The hour-long film, Agents of Change, explores the events of April 1969, when African American students occupied the Straight—eventually arming themselves with smuggled-in guns after repelling an incursion by white fraternity brothers. The event made worldwide headlines and won a Pulitzer for the AP photographer who’d captured the seminal image of the armed occupiers leaving the building, which was bedecked with a welcome banner for Parents’ Weekend.

The film was a passion project for its director/producers, Frank Dawson ’72 and Abby Ginzberg ’71. Despite sharing a major—government—and being one class year apart, the two had never known each other on campus. They met seven years ago, when a fellow Cornellian suggested they team up to make a film about the takeover, an event that had been life-changing for both. He was one of the black students occupying the building; she was a white member of Students for a Democratic Society marching in solidarity outside. “We had no idea it would escalate into something that we’d still be talking about today,” says Dawson, now an associate dean at Santa Monica College, sitting with Ginzberg on the sunny Willard Straight terrace during a recent visit to campus. “There was no sense that this would be something historic. Not at all.” 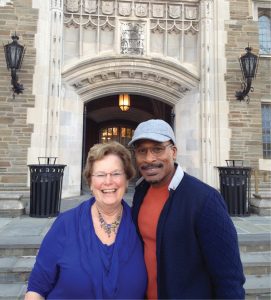 Ginzberg (left) and Dawson in front of the Straight today.

Before shifting to academia, Dawson had a two-decade career as a TV executive at NBC and CBS. Ginzberg is an award-winning documentarian who has made a half-dozen films on social justice topics. The idea of revisiting the events of 1969 seemed like fate, and they formed a creative partnership with a handshake. “We felt the film could tell an untold story,” she says. “We were filling a gap by telling a story about the convergence of the civil rights movement and the black power movement on college campuses.”

Agents of Change places the Straight takeover in the context of its era, when colleges and universities were becoming more racially inclusive but often resisting the academic and cultural changes that a more diverse student body would inevitably require. (The movie’s first half is devoted to a 1968 protest at San Francisco State, where demands for a black studies program led to a lengthy strike, violent confrontations, and criminal prosecutions.) It features interviews with more than a dozen alumni and former administrators including then-provost (and later president) Dale Corson, widely admired as a voice of reason who helped resolve the crisis without bloodshed. “This was a touchy situation,” Corson, who passed away in 2012, tells the camera. “There were deputy sheriffs downtown, everyone well armed. There was a group of [about 100] students in the Straight, most of them without experience with firearms. I had a strong fear that if we went through another night—it would be the second night of the students in that building—somebody was going to get killed.” 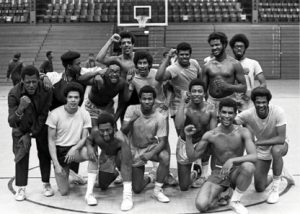 In 1963, as the film notes, Cornell had 11,000 students—and just twenty-three of them were black. By 1969, the number had risen to 250; Agents of Change recounts the prejudice that some of them faced. Jacque Jones ’69, BS ’75, MBA ’75, describes being the only black person in her engineering classes and being shunned by potential lab partners; Irene Smalls ’71 recounts an infamous incident in which black women who were straightening their hair were reported for smoking marijuana by dormmates unfamiliar with the odor of pressing oil. Harry Edwards, PhD ’73, then a Woodrow Wilson Scholar studying for a doctorate in sociology, recalls being asked by a faculty member, “Can you read? Can you write? Have you ever written anything longer than a letter?”

Events came to a head after a cross was burned on the lawn of Wari House, a residence for black women. “That was the coup de grace in terms of taking us to a higher emotion level,” Eric Evans ’69 says in the movie. “We were all angered. We were all ready to do something.” The filmmakers go on to take viewers inside the Straight, describing the events in the occupiers’ own words, which are often poignant and revelatory. “I remember going over to a little corner in the Straight by myself and just saying, Well, other people have given their lives so that my people could study and move forward with their lives,” says Jackie Davis-Manigaulte ’72. “And if I have to sacrifice my life to move that movement forward, then that’s what I’ll have to do.” 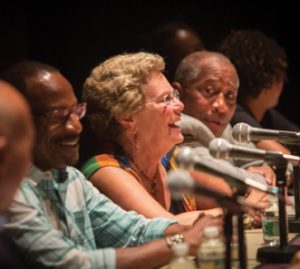 Ginzberg (center) and Dawson (at left) at a panel discussion following a screening at Cornell Cinema in September.

The documentary had its world premier at the Pan African Film & Arts Festival in Los Angeles in February 2015 and has had numerous screenings at universities, festivals, and theaters. Showings are ongoing, with one set for Chicago on November 11; Jones will be on hand to answer questions. The screenings are often followed by a Q&A or panel discussion—and to the filmmakers, they’re an essential part of the viewing experience. “A kid in Louisiana asked a question the other day: ‘Why do you think it’s so much harder for me as a young black man today than it was in 1969?’ ” Ginzberg recalls. “Is it that much harder? I don’t know. But it provoked twenty people from the audience to tell him about their experiences in 1969. So it doesn’t even matter whether it’s true. He got this outpouring of attention and care because he asked a really honest, hard question. If a film can do that in different parts of this country, that’s big. Long after the film is done, a dialogue has been opened.”

The filmmakers are well aware that their movie is nothing if not timely: the struggles of 1969 continue today, in the form of Black Lives Matter and related movements. Indeed, on the weekend that the movie was screened at the Straight—and a plaque commemorating the original site of the Africana Studies and Research Center, at 320 Wait Avenue, was dedicated—protests were roiling Charlotte, North Carolina, following the latest death of a black man at the hands of police. “There’s something about this moment that is very precious,” Ginzberg observes.

“I feel honored to have a product in the world that has the capacity to provoke the right kind of discussion—one that is both interracial and intergenerational.” Adds Dawson: “We finally got this film completed when it is so necessary and important, and it’s being much appreciated for its ability to begin the conversation that needs to happen in this country regarding race. So the timing could not be better.”

Plans are in the works to make Agents of Change available via streaming. For more information, including screening dates, go to agentsofchangefilm.com.