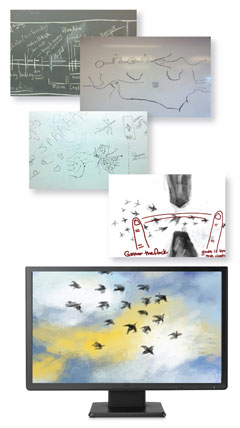 The game is called “Dodgeball Damnation,” but on a Tuesday afternoon in March, it’s just a collection of rudimentary images projected onto a wall in Upson Hall. Standing at the front of the classroom, information science major Christine Geeng ’16 explains that the game stars a character named Disco Thunder, who was the world dodge ball champion until her untimely demise. “Then she was recruited by the Demons to play against the Angels,” Geeng says, “who win every year—because they cheat.”

At this stage, Disco Thunder is just a red-and-black pixelated block; the balls she shoots are small yellow circles. But by the end of the semester, Dodgeball Damnation will be a fully functioning computer game. “I understand that this is a prototype, but things that are hard to see on the projector also tend to have game play effects,” computer science professor Walker White, PhD ’00, observes when the presentation concludes. “You have black on very dark blue; there’s not enough color differentiation. With very action-y games, you want high contrast and clear backgrounds.”

Geeng and her teammates ponder the feedback, and the rest of the class weighs in. “Are you planning to differentiate the obstacles?” one student asks. Another wants to know, “Will you have more monsters?” Then it’s time for the three other teams to present their prototypes: a storybook heroine’s quest for a happy ending; a trip through a maze-like prison; and a puzzle that culminates in a trip to heaven.

It’s a typical session in one of the University’s most sought-after classes: Introduction to Computer Game Development. The course, which is taught each spring and has a 200-person waiting list, is part of the Game Design Initiative at Cornell (GDIAC)—a program in the computer science department that gives student programmers and designers the chance to make original games, present them at local and national showcases, and earn an optional minor in the field. “If you can make a game, you can make any piece of software,” says White, who has directed GDIAC since 2008. “In terms of education, the selling point is not that we’re producing people for the games industry. It’s that you learn project management and how to develop large-scale software relatively early in your undergrad career.”

GDIAC courses are designed to be highly creative and entrepreneurial: students have to come up with their own concepts and develop them throughout the semester in a workshop-style atmosphere. “You start from scratch,” says White. “I’ll give you guidelines; I’m constantly giving feedback on what I think is fun and what’s not. First of all, it has to be innovative. It can’t be an exact copy of something I’ve seen before—and much to the students’ chagrin, I play a lot of games.”

Founded in 2001, GDIAC was initially created as a way to attract students to computer science at a time of depressed enrollment following the burst of the dot-com bubble. It has since become highly regarded in the industry, White says, with its alumni working for such firms as Nintendo, Zynga, Riot, and Electronic Arts and helping to develop titles like “Plants Versus Zombies 2,” “Farmville,” “Star Wars: The Old Republic,” and “BioShock Infinite.”

Each May, students from GDIAC’s introductory and advanced courses, plus those doing independent study projects, present their creations at a showcase in the engineering library in Carpenter Hall. Their popularity with the audience, White says, is a key factor in a student’s final grade. “The public can always override my opinion,” he says. “If I don’t like a game but the public really likes it, I will defer to them and grade it accordingly.”

When Oliver took the advanced class as a sophomore, his team won an audience choice award at the showcase. Their game, Gathering Sky, lets players guide a bird around the world, adding others to its flock. Last summer, it was named the most promising game at a showcase in San Francisco. “It’s very meditative, very experiential,” Oliver says. “It’s the sort of game that a three-year-old can play and my grandmother can play, and they can both enjoy it.”