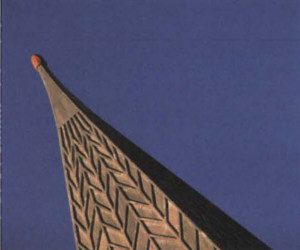 The Gourd in question, circa spring 1998.

By the fall of 1999, when I was editor-in-chief of the Sun, the paper had long given up hope of finding out who stuck a pumpkin on the peak of McGraw Tower in 1997. All investigations had been fruitless; everyone we’d speculated about (the university, athletic teams, fraternities) had denied it. But just before Halloween last year, the paper published a light piece recapping the two-year-old mystery-a story which, in the end, said that the pumpkin was destined to remain an enigma.

Evidently, the piece caught the eye of a university employee whom I’ll call George Washington. Indeed, it made him laugh, and for good reason: he claimed he knew who really did it. “I was a housemate of one of the three individuals involved,” he e-mailed, “and now that he has moved away from town I don’t see any harm in setting the record straight. I have details on the prank not released by the C.U. police, that could be verified by them to cor- roborate the truth of what I tell you.”

So I called George, and he told me the whole story: how three friends managed to captivate the campus and the country with nothing more than duct tape, wire cutters, rope-and, of course, a pumpkin. But there was a catch. George didn’t want his name printed and he wouldn’t disclose the names of the perpetrators.

According to George, the main culprit is a Cornell grad (I’ll call him Kennedy) who’d pulled a similar prank in his hometown involving a squash and a steeple. When George talks about Kennedy, it’s with awe. Kennedy was brilliant, George says — intelligent, meticulous in his planning, and a great climber. One imagines that when Kennedy arrived at Cornell, he saw the bell tower and knew that he was put on Earth to decorate its steeple. And to that end, George says, Kennedy began hanging out at local outdoor-sports stores, looking for a few good climbers to help him do the deed. He found two. Call them Reagan and Nixon.

“That night, [Kennedy] went up early, when the chinlesmasters were playing, and he hid out,” George says.

“He stayed for about an hour. When he left, he duct-taped the door locks — there are two — on his way out, so that they wouldn’t lock. He left, and they all met up and came back at midnight.” They came back with the pumpkin, which George says was normal (“no preservatives”), bought from a farm stand and cored. They also had a pair of wirecutters and some rope. When they tried the doors, they saw that Kennedy’s duct tape trick had worked. In no time, they were up with the bells.

They surveyed their surroundings. Above, they saw a wire-mesh grating blocking off the roof. Beyond the grating, which was locked with a standard padlock, they saw an access hatch that led to the out- side of the tower. “So the plan was to get through that grating, get to the hatch, then go up the roof from there, and place the pumpkin on top,” George says. “They free-climbed the interior beams to reach the lock — three strong guys can do that — and they cut it.” From there, Kennedy climbed up to the access hatch. “You can’t tell this from the ground, but the roof is made up of two-inch-deep tiles. They’re not incredibly solid, but it’s going to provide excellent hand- and foot-holds-though up there the winds are brutal, even when it’s sunny out.”

This is how it went: Kennedy climbed to the peak holding one end of the rope, the other end of which was attached to the gourd.When he got to the top, “He tugged on the rope to let them know he was up. They sent him the pumpkin, he jammed it on the damn thing, and he climbed down.” When he got back inside, they laughed for fifteen minutes, then went for a beer.

George has kept the secret out of concern for the three, he says. After the pumpkin became a national sensation, they got scared of getting into deep trouble. But George can back up his story. “The newspapers never printed that the padlock had been cut off, but the police would have that detail,” he says. “I don’t know if they know the doors had been taped.”

I called the university police, who confirmed that the lock had been cut. But they wouldn’t say anything about the duct tape.