In 1939—almost precisely the halfway point between the University’s founding and today—the Cornell Alumni Association published a slim volume of essays (and one poem) entitled Our Cornell. In its sixty-odd pages, prominent Big Red wordsmiths encapsulated life on the Hill, pondering such perennials as freshman angst, faculty excellence, football games, the University’s standing in the world—and, frequently, the vicissitudes of Ithaca weather.

The book was occasioned, as Raymond Howes ’24 said in the foreword, by the realization that eminent alumni writers (such as CAM’s own Rym Berry 1904) had “put Cornell on paper—the Cornell we know but were too blind to see or too inarticulate to describe.” In 1933, for example, E. B. White ’21 published in University magazine a widely read essay entitled “I’d Send My Son to Cornell,” in which he enumerated the Hill’s many virtues and quirks. (“I would send a son to Cornell because it would be impossible for him to come home frequently. When you get to Ithaca, you stay put.”) In a 1929 edition of the Saturday Evening Post, Kenneth Roberts 1908 compared universities in general to the works of Shakespeare, while reserving particular praise for his alma mater. “Unworthy critics, whose investigations are conducted with a sly and cunning purpose, can always find cause in them for secret titterings, for sanctimonious finger pointings, for excited whisperings, for prunish and prismatic offense,” he wrote. “Normal persons find beauty, freshness, youth, humor, and other desirable things, including a boundless reservoir of wisdom on which the world can draw forever. That goes for Cornell.”

Three-quarters of a century after Our Cornell was published, CAM took a copy off the shelf for a fresh reading. As it turns out, its essays remain surprisingly au courant.

“There has been a tradition at Cornell for many years that freshmen shall wear small gray caps, but of late there have been ominous signs that Cornell freshmen do not care for the tradition and are thinking seriously of getting along without small gray caps. What has caused Cornell freshmen to take such a revolutionary stand is not definitely known to anyone, including the freshmen. They may have noted, or somebody may have called their attention to the fact, that the girl freshmen or freshwomen wear no freshman caps. They may believe in equal rights for men. They may have wanted to revolt against something, as modern youth is supposed to do, and have known of nothing to revolt against except freshman caps. They may have been egged on by a hat dealer. Nobody knows.” 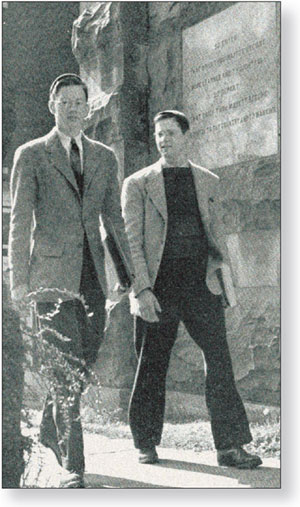 “Of course, there are a few disadvantages connected with residence on the hill. The weather is somewhat harsh. In summer the sun is likely to turn the asphalt into a semblance of unleavened dough. Often during the winter does a lusty wind, which bloweth high above Cayuga’s icy waters, make one wish for a third layer of mackinaw and leather waistcoat. But these are mere climatological details. There is a long autumn of wondrous beauty. There is the spring, when the most lowly of towngirls assumes the estate of Heloise or Beatrice. But, best of all, there is at all times the feeling of complete and untrammeled freedom.”

I’d Send My Son to Cornell

“The amazing range of instruction available at Ithaca is itself an inspiration; for although one stays pretty much within one’s narrow sphere of culture, the evidences of the broader life are all around on the Campus. The civil engineer, making his unceasing survey of the quadrangle, approaches the very steps of the Arts College; and this fills him with an awareness of the realm of pure beauty he will never enter. In return, the Arts student, tripping over a transit, is humbled by the power of exact science. Further, Cornell is a land grant institution; its Agricultural College pays homage to the State, and this flavors the whole place with the sweet breath of kine and endows it with the vitality of the soil. I’d send my son to Cornell because, passing the Vet College where dogs howl by day and by night, he will be reminded that even in the Almost Perfect State toward which his education is wafting him, all dogs will have worms and be disconsolate.”

‘ . . . of late there have been ominous signs that Cornell freshmen do not care for the tradition [of wearing beanies] and are thinking seriously of getting along without small gray caps.’“Should we complain because our Alma Mater has found no fixed and sure classification in the educational world? Why no, I should think not. Perhaps the amazing growth of the University from the seed planted by Ezra Cornell is due to characteristics implicit in the seed and developed by its isolation and independence. Perhaps it is important that we should not be grouped as a member of any Big Four or Big Twelve. As the qualities in the seed persist and fructify, it may be that foreign observers hunting the essentially American college will specify Cornell University. And perhaps Harvard, Yale, and Princeton.”

“The University has gotten under way again. Man and boy for thirtynine years I’ve witnessed the metamorphosis wrought annually by that event, and each time it seems more incredible than it ever did before.

One day the roofs and towers on the hill snooze in the warm sun of Indian summer; a few professors shuffle along the Campus, walking on their heels; a single laundry solicitor leans heavily against the lamp post at the south end of the stone bridge.

And then next morning, unaware, the place crawls with 6,000 boys and girls who were not there the night before, 2,287 are dressed to the skin complete in garments they did not possess a week before. There are 1,721 palpably new haircuts. 3,174 of this flood of Japanese beetles are trying to sell you something, or give you something, or anyway sign you up. The shuffling professors of yesterday are up on their toes again. Their clothes are pressed; their eyes shine with high resolve.

In a week or two we’ll settle down again into the old accustomed rut, as the polish fades on the newly furbished offices in Morrill Hall. But now everything glistens, including the eyes of young and old. Interests are new, hopes are new, and even good intentions have been shined up to look like new.”

“Spirit of Wisdom, like an altar burning
High o’er this darkling world vexed
with little learning,

Let thine enkindling ray ’round about
these towers dwell,
Lighting thy hills, Cornell.

Thou art not stone, so much as one
man’s dreaming—
Then let thy lamp be bright and thy
doors be gleaming;

And let thy sons go forth, doubt and
darkness to dispel;
Shine from thy hills, Cornell!

Thou art his Vision! Lo, within thy
portal,
Robust and radiant, stands his soul,
immortal;

O let his honor be far-sounding
as a bell—
Long live thy name, Cornell!”