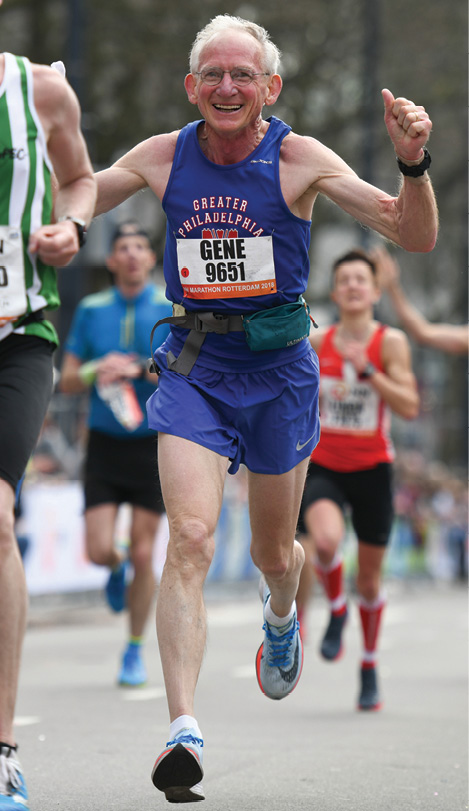 Step by Step: Dykes during his record-breaking race in RotterdamErik Van Leeuwen

Running a 26.2-mile race in under three hours is a formidable feat at any age, let alone in your seventies. Until 2018, just one person had ever done it. In April, Gene Dykes, PhD ’78, became the second.

Dykes ran the Netherlands’ Rotterdam Marathon in 2 hours, 57 minutes, and 43 seconds—setting a new world record for a seventy-year-old, and besting the previous record by more than two minutes. Eight days later, he won his age group at the Boston Marathon for the third year in a row. “Being a world record holder wasn’t my goal—it was a target to motivate my training,” says Dykes. “But there came a point when I said, ‘There isn’t anybody [my age] better than me.’ ”

A retired computer programmer who lives in the Philadelphia area, Dykes was a decent two-miler in high school in Ohio, but couldn’t cut it competitively as an undergraduate runner at Lehigh University. Though he jogged a bit over the decades to keep fit, he didn’t begin serious distance running until twelve years ago. Now he defies the odds by getting faster every year. “It used to be that after twenty miles I took a rest day,” says Dykes, who holds a doctorate in biochemistry from CALS. “My coach put the kibosh on that. He worked me a lot harder. Now I can do twenty miles, day after day, and my body has learned to get by on the recovery of a night’s sleep.”

Dykes puts in about 2,800 miles a year in training runs and races—sometimes competing in two marathons in a single weekend. Some of his strategies are unorthodox. For one thing, he never stretches, believing it leads to injury. Eschewing sports drinks, he guzzles diluted Coca-Cola to fuel his final miles; the night before a race, he hides a bottle of the stuff along the course. “With six miles to go,” he says, “it’s such a pleasure to grab that bottle from some bush along the side of the road.”

Read about more amazing Cornellians like Gene in the pages of your Alumni Magazine!

Unlike most elite marathoners, Dykes includes some 200-mile ultra-marathons and multiday stage races—like a 140-miler over seven days—among the thirty-five races he runs annually. Although many runners would fear that those long races would harm performance in the 26.2-milers, he thinks they improve it by raising his pain tolerance and honing his ability to recover quickly. Above all, he attributes his success to a coach he hired a few years ago. “He designed workouts that I could not have dreamed up,” he says, “because at first they seemed impossibly hard.” It’s not that the coach had Dykes pulling a sled filled with rocks; rather, he amped up the frequency and intensity of workouts, which Dykes says appealed to his inner “running nerd.” And along with that improved fitness came a mental breakthrough: sustained, sub-seven-minute miles were doable.

The age-seventy record that Dykes smashed in Rotterdam had been set by Ed Whitlock, a legendary Canadian runner who died last year. When Whitlock was seventy-three, he ran an even faster marathon, a record that Dykes is now eyeing. “I’m three minutes off that right now,” he says. “I’ll probably give it a go.”