Physicists have long dealt with moving bodies. But it’s unlikely that when Sir Isaac Newton published his laws of motion in 1687, he ever imagined they’d be applied to describing how the crowd behaves at an Iron Maiden show.

In February, physics grad students Jesse Silverberg and Matt Bierbaum posted a paper to the academic publication site arXive.org entitled “Collective Motion of Moshers at Heavy Metal Concerts.” Working with their advisers, professors Itai Cohen and James Sethna, the pair created statistical models that reproduce the extreme behavior of audience members who spend much of a show either running in coordinated circles or randomly slamming into each other. 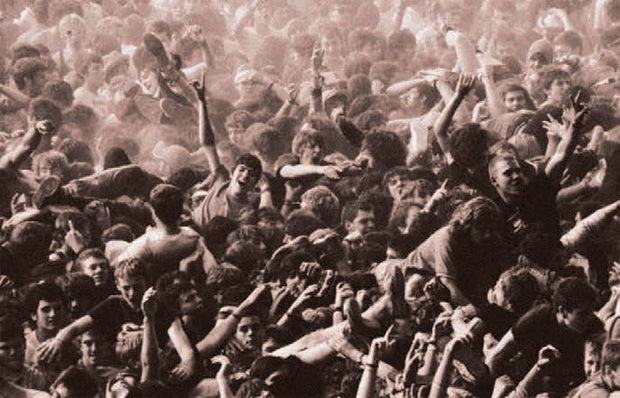 Silverberg got the idea for the study five years ago while attending a heavy metal show in Massachusetts. For the first (and last) time, he was accompanied by his girlfriend, so instead of jumping into the mosh pit he stayed off to the side and observed the action. “People were packed in really tightly, so when someone hit someone else, you could see the collision travel through the crowd,” he says. “There’s an analogy to how waves travel through metal; when you tap a table, the sound wave propagates through it. So for the rest of the show, I focused on that.”

Three years later Silverberg met Bierbaum—a fellow metal fan and a classically trained pianist—in Sethna’s statistics course. For their class project, they picked up Silverberg’s idea and analyzed YouTube videos of crowds at heavy metal shows. They noticed that the equations used to describe how gas molecules move were applicable to quantifying how the audience behaved. They also found that heavy metal crowds in motion tend toward two types of movement: a disordered gas-like state called a mosh pit and an ordered vortex-like state called a circle pit. “So we created a model to describe what was happening,” Bierbaum says. “Basically, they’re equations of moshing where we treat people as rubber balls in a box.” Bierbaum created an online interactive computer simulation to demonstrate the findings; by the end of March it had drawn more than 300,000 hits.

The study was independently funded —the students paid for their own concert tickets—with the only additional expense incurred when Silverberg and Bierbaum needed to carve out some time to write up their research. So they hopped an all-night train from Syracuse to Chicago, producing the first draft during the twelve-hour ride and completing the revisions during the return trip.

According to Silverberg and Bierbaum, the research—which they presented at the March meeting of the American Physical Society—could increase understanding of how people behave in panic situations such as earthquakes, fires, or bomb scares. While acknowledging that heavy metal concerts are different from actual riots, the pair claims that they’re much more predictive of such behavior than simply analyzing pedestrian traffic in Times Square. “If all of your understanding is based on what people are doing walking through Manhattan, you’re going to miss a lot of important events,” Silverberg says. “Anything different that we can learn from these metal shows gives us a new way to view people in these extreme states.”