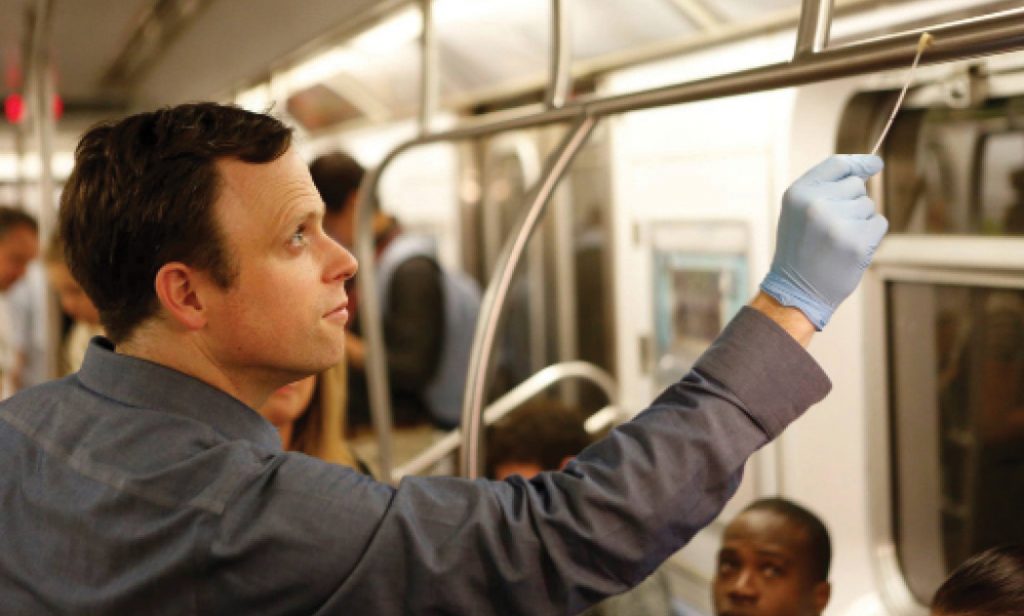 When Liz Pereira ’14 and Bharathi Sundaresh ’15 interned at the medical college in summer 2013, they got some curious stares from random New Yorkers. As part of their work in the lab of Christopher Mason, an associate professor of physiology and biophysics and of computational genomics, they spent hours in the city’s subway system—collecting samples from turnstiles, benches, ticket machines, and other surfaces. “We’d be swabbing the same handrail or pole for three minutes, since that’s what the protocol required,” recalls Sundaresh, a former biology major who now works at Unilever, “so we definitely got some weird looks.” One common question they fielded was whether they were part of a janitorial crew. “As if,” Mason observes with a laugh, “it would be your first day on the job at the transit system and you’d be told, ‘You will clean an entire subway car with this one Q-tip.’ ”

But in fact, the team was working on the first phase of an ambitious scientific project: taking samples from each of New York’s more than 450 subway stations, and from trains on every line, as a window into the city’s microbial makeup. “The subway is probably the most dense and highly populated microbial transfer point that exists for humans in the world,” says Mason, noting that 5.5 million people ride the New York system daily, with some 10 billion people worldwide using some sort of mass transit each day. “It’s this amazing space that we all share, and it serves as a hub, not only of bacterial and genetic diversity, but also of transmission and interchange between people.”

The project’s overarching aim was to get a snapshot of the city’s micro­biome—the bacteria, fungi, and viruses that coexist with humans, for the most part harmlessly. Such information is beneficial not only for the purposes of maintaining public health, Mason says, but for fields like urban planning, pollution remediation, and bioterror defense. “This is an essential baseline in terms of what a normal, healthy microbiome looks like,” says Mason, whose collaborators on the project include Linda Nozick, a Cornell professor of civil and environmental engineering. “It gives you an understanding of the basic status of a city, a way to determine if something problematic has occurred. The only way you can know if something has changed is if you have a sense of what was there before.”

After Mason’s team collected thousands of samples, the researchers extracted the DNA and sequenced it to create a “pathogen map”—PathoMap for short—showing hundreds of bacterial, viral, fungal, and animal species that dwell in the Big Apple. They range from the amusing—bacteria associated with foodstuffs like mozzarella cheese and sauerkraut—to the sobering, including those related to staph infections and gastrointestinal illness. Notably, about half of the DNA fragments collected couldn’t be matched to any known organism—not necessarily because they’re especially rare or dangerous, but because the vast majority of species haven’t yet had their genes sequenced. “Nothing very horrible was found; it was mostly regular bacteria,” says Pereira, a former biological engineering major who’s working on a PhD at the University of Virginia. “Everyone rides the subway and is pretty much fine, so it’s not something that people have to worry about.” Mason compares touching a subway pole to shaking a hand—and points out that humans already carry much more threatening bacteria inside their own bodies. “If you were standing in a station and looking for a place to be concerned about, it would not be the subway,” he says. “In terms of the likelihood of finding any bacteria of potential concern, there are far greater numbers—an order of magnitude—in your own gut.”

Building on PathoMap, Mason is now pursuing the research on a worldwide scale. On June 21—the summer solstice—he and hundreds of colleagues and volunteers fanned out to fifty-
four cities (in thirty-two countries and on every continent except Antarctica) for Global City Sampling Day, in which they collected more than 12,000 swabs from mass transit and other public spaces. It included such international locations as New Delhi, Moscow, Tehran, Doha, Johannesburg, Rome, Paris, Oslo, Buenos Aires, and Bogota, and U.S. cities such as New York, Chicago, Los Angeles, San Francisco, and Seattle. Each location took a slightly different angle. In Fairbanks, Alaska, sample sites included buses and bus stops; in Boston, the sewer system; in Montevideo, Uruguay, beaches and shallow seawater.

Funded in part by $100,000 from the Bill & Melinda Gates Foundation, the global sampling effort continues through 2020—allowing it to straddle two Summer Olympic Games. Researchers took samples at a variety of sites in Rio de Janeiro before, during, and after the city hosted more than a million international visitors in August; they’ll do the same in Tokyo four years from now. (To study transmission of the Zika virus, they also sampled mosquitos in and around Rio.) “The Olympics give us the chance to monitor a city during a large-scale human migration event, the likes of which you’d only see with a war or natural disaster,” Mason says. “But in those situations you’d have people moving from one country; as far as I can think of, this is the only instance when so many people from so many countries around the world converge on one city.”

Mason got the idea for the initial PathoMap project after his daughter was born in 2011 and he observed how kids “explore the world with their mouths”—from toys at daycare to poles on the subway. It sparked a desire to chronicle what’s on the public surfaces we touch every day, and see how that information could inform understanding of a city’s microbiome. “When people ask how germy or dirty the subway is, I think it’s the wrong way to frame it,” Mason muses. “You should view the subway the same way you do the rainforest—as this extraordinarily diverse ecosystem that’s teeming with life and full of mystery.” He points out that during the PathoMap collections, so many people stopped to ask what the students were doing, his lab made up informational cards for them to distribute. (The cards also came in handy for explaining their actions to concerned transit cops.) While some New Yorkers seemed eager to follow the project’s outcome, others told them that when it came to the microbes lurking on a typical turnstile or Metro Card machine, ignorance was bliss. Most strap-hangers, though, fell into an unflappable middle. “They’d just shrug their shoulders and keep moving,” Mason says. “That’s what’s amazing about New Yorkers. They’ve seen much stranger things.”