SAILING Cornell won the Middle Atlantic Intercollegiate Sailing Association championship on Cayuga Lake in October—its first-ever conference title. The regatta went down to the final race of the second day with Cornell’s pair of Brooke Shachoy ’22 and Becca Jordan ’21 finishing third, two spots ahead of William Smith’s boat to provide the two points that separated the teams in the final standings. Daisy Holthus ’21 and Kimberly Wong ’19 got the Big Red started off on the right foot, posting two firsts and a second in light winds on the first day. The conference title helped propel Cornell, which won four other events during the fall, into the fifth spot in the Sailing World national college rankings, its best showing in program history. 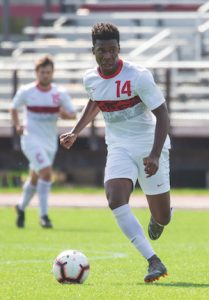 MEN’S SOCCER After helping the Big Red to an 11-6 record, Emeka Eneli ’22 (right) was named Ivy League Rookie of the Year. Eneli—who was second in the league in scoring, with seven goals and 16 points—is the first Cornell player to earn that laurel since Richard Stimpson ’01, BS ’02, in 1997. Charles Touche ’21 became the first Big Red player in four years to earn first-team All-Ivy honors after posting a league-best eight goals and 18 points. A six-game winning streak propelled Cornell to 18th in the United Soccer Coaches Poll after a five-year absence from the rankings. 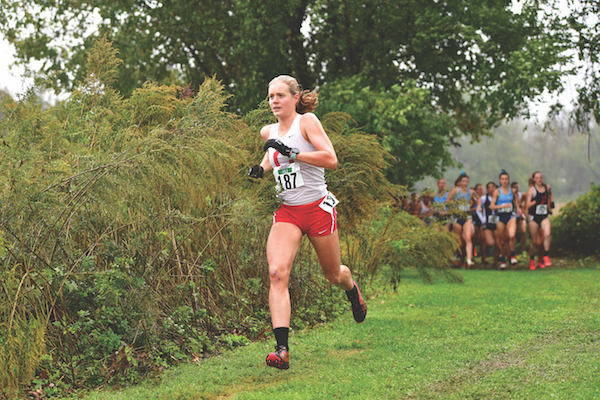 WOMEN’S CROSS COUNTRY Fresh off a U-23 world triathlon championship, Taylor Knibb ’20 (above) enjoyed an outstanding season, earning first-team All-Ivy honors and qualifying for the national championship meet. Knibb was seventh in the Ivy meet and finished fifth at the NCAA regionals. At the NCAA championships, she was 109th out of 255 runners and was named the meet’s Elite 90 winner, an honor that goes to the participating student-athlete with the highest cumulative GPA. She is the fourth Cornellian to receive an Elite 90 award, joining Devin McMahon ’14 (cross country), Christine McIntosh ’14 (fencing), and Shelly Tremaglio ’13 (rowing).

MEN’S TENNIS David Volfson ’19 won the Intercollegiate Tennis Association Northeast Regional Championship in October, taking six straight matches to top the 96-man field. He also teamed with Daniel Soyfer ’20 to reach the finals of the doubles competition. The regional singles title win sent Volfson to the ITA National Fall Championships in Arizona, where he won his first two matches before losing to the defending NCAA singles champion in the Round of 16. Volfson will begin the spring season 14th in the national rankings, while the doubles team of Volfson and Soyfer is ranked 30th.

FIELD HOCKEY Maddie Henry ’20 finished in the top 10 among NCAA Division I goalkeepers with 7.24 saves per game and a .764 save percentage. Her 18 saves against Princeton were the most ever for a Big Red goalie at a home game.

MEN’S GOLF Tianyi “Jack” Cen ’19 closed the fall portion of the season by winning the UConn Invitational in a playoff. Cen finished with a three-day total of 218 (two over par) to finish in a four-way tie for first place—then parred the first playoff hole, earning his first collegiate medal.

MEN’S HOCKEY In October, Jacob MacDonald ’15 scored his first NHL goal—on his first NHL shot in his first NHL game. After several years in the minors, MacDonald earned a spot on the Florida Panthers lineup with a strong showing during the preseason. His goal was the only one in the game for the Panthers, who lost to the Tampa Bay Lightning 2-1 in a shootout. He’s the 31st Cornell player to reach the NHL.

SAILING Claire Riedman ’16 and Big Red head coach Brian Clancy were on the winning Boss team at the 2018 U.S. Team Racing Championship in Cleveland. Boss edged College of Charleston 3-2 in the final to take the win.

FOOTBALL The Hamilton Tiger-Cats’ Luke Tasker ’13 was named a Canadian Football League Eastern Division All-Star for the fourth time in the last five seasons. His former Big Red teammate Jeff Mathews ’14 has signed a contract extension to return to the CFL’s Montreal Alouettes in 2019.