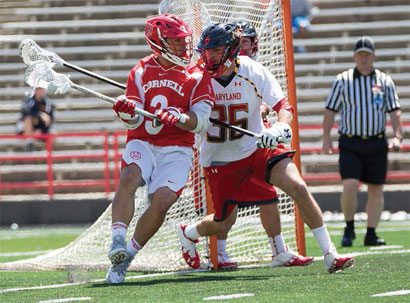 When Rob Pannell ’12 broke his foot in the second game of the 2012 lacrosse season, he didn’t want that to be the end of his Cornell career. He just wasn’t done. Granted a fifth year of eligibility by the Ivy League, Pannell made the most of it, leading the Big Red to a 14-4 record, the regular-season Ivy title, and a spot in the NCAA tournament. Cornell then trounced both Maryland and Ohio State to advance to the Final Four. Although the team lost a 16-14 heartbreaker to eventual champion Duke in the semifinal, Pannell notched five goals and two assists in the game to move to the top of the NCAA career points list with 354. A week later, he was named the winner of the Tewaaraton Trophy as the nation’s most outstanding men’s college lacrosse player.

Pannell is the second Cornellian so honored, along with his friend and former teammate Max Seibald ’09. After receiving the trophy at a ceremony in Washington, D.C., Pannell said, “This award really belongs to my team, especially the senior class. It speaks volumes about the great team we had this year and the success that we had.” Not one to rest on his laurels, Pannell made his professional debut on May 31, joining Seibald as a member of the New York Lizards. He had three goals and an assist in a 14-12 loss to the Charlotte Hounds and was named Rookie of the Week by Major League Lacrosse.

CHAMPS AGAIN The track and field teams continued their history of postseason success as the women captured their second consecutive Heps title and the men won the IC4A meet for the first time since 1951. The women had clinched their 14th Ivy championship before the final event was even run and outdistanced second-place Columbia by 24 points.

Victoria Imbesi ’13 led the way, winning both the javelin and shot put to earn co-field MVP honors. The men’s team was second at the Heps and then returned to the same track at Princeton a week later to finish atop the 44-team field at the IC4As, which also serve as the ECAC championships. 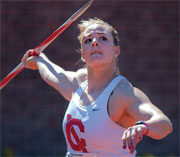 Cornell did much of its damage in the field events, with Stephen Mozia ’15 winning the shot put, Robert Robbins ’16 taking the javelin, and Steven Bell ’14 finishing first in the long jump.

OVERTIME The United States Polo Association intercollegiate women’s championship match went to a shootout for the first time ever, and Cornell came out on the losing side of history to the University of Virginia. The Big Red jumped to an early 5-1 lead, but UVA chipped away and tied the score at 9-9 with 30 seconds left, forcing the shootout. This was the third straight year that Cornell had faced Virginia in the national finals.

WINDJAMMERS The women’s sailing club beat long odds to take third place at the 2013 Intercollegiate Sailing Association championships in St. Petersburg, Florida. Competing against a mix of varsity and club programs, the squad earned a spot in the finals by topping an 18-team semi­final field to advance. In the finals, Cornell edged Boston College and Stanford by a point in the final race, as the Big Red boat, sailed by Jenny Borshoff ’15 and Devon Furlong ’14, finished just ahead of BC for a critical two-point swing.

Soccer by the Numbers

Early in 2011, Cornell government professor Chris Anderson was watching soccer on TV with his friend David Sally, a former Johnson School professor now teaching at the Tuck School of Business at Dartmouth. Sally was puzzled by the long throw-ins made by a player on an English Premier League team. He asked Anderson, a German native and former semi-pro goalkeeper, why Rory DeLap of Stoke City kept making such lengthy tosses when no one else seemed to do it. Anderson tried to explain, showing how it made sense given Stoke City’s personnel and playing style. Sally wasn’t convinced. As the two bantered, it became obvious that there was no easy answer.

Anderson and Sally tell the story in their new book, The Numbers Game: Why Everything You Know About Soccer Is Wrong. The Stoke City conversation started them down the road toward an investigation of analytics in soccer (or, as the rest of the world knows it, football). The best-known application of analytics to sports has been in baseball, as chronicled by Michael Lewis in Moneyball. As Lewis explained in the book, the use of statistical analysis that went far beyond batting averages and ERAs was at first ignored by the baseball establishment. They knew what they knew, and no number-cruncher was going to tell them otherwise. But then Billy Beane, the iconoclastic general manager of the Oakland A’s, used the methods of the so-called “sabermetricians” (a name derived from the Society of American Baseball Research) to build a winning team on a minimal budget. Pretty soon, almost everybody in the game was paying attention. 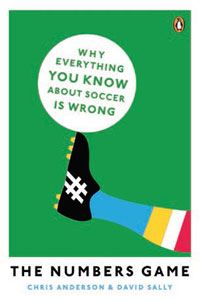 Anderson, a political economist, and Sally, an expert on social interaction and behavioral game theory, were the ideal team to apply statistical analysis to a game that seemed to defy it. Soccer was just too random, many said—scoring goals was as much a matter of luck as skill. And then there was the beauty factor. Soccer is often called “the beautiful game,” and its adherents are as much impressed by a flowing sequence of passes that fails to score as they are by a quirky bounce that puts the ball in the goal—maybe more so. Getting the game’s establishment to look at charts that seemed to question the value of taking more shots than the opponent wasn’t going to be easy.

Undaunted, Anderson and Sally plugged away at the numbers. Their book has a wealth of statistical information, but is enlivened by anecdotes about players, coaches, and team owners—not all of them flattering. The chapters examining the role of professional managers—”subjects of some of the most intense hero worship in the modern world”—are especially entertaining. The authors scrutinize these supposedly all-important team leaders and come to the conclusion that managers are “responsible for only 15 percent of their club’s fortunes.” That could be disconcerting to the owners of Chelsea of the Premier League, who recently signed manager José Mourinho (“The Special One”) to a four-year contract worth a reported £40 million.

Response to the book has been “kind of funny,” Anderson says. Many fans have been enthusiastic, but the game’s establishment—much like baseball’s front offices—has been slow to adopt the statistical methods it espouses. “There are some people who are trying to do it, but they’re not getting a lot of support from above,” Anderson says. “And then there are people on the other side, just like in baseball, who don’t believe there’s value in it. I don’t need some pinhead from Cornell telling me this stuff. It’s kind of like Moneyball all over again.”

If so, then Anderson and Sally just need to be patient. The Numbers Game has received a ringing endorsement from Billy Beane, who called it a “must read” and said it will “change the way you think about your favorite team or player, and change the way you watch the beautiful game.” While the Europeans may be resistant, Anderson thinks that analytics could have a stronger impact in the U.S. “In the States, there’s more comfort in talking about the game this way, because we don’t have the same kind of venerated tradition. There are no sacred cows in the same way that there are in Europe.” And you never know—someday an obscure American soccer executive may see himself portrayed on the big screen by Brad Pitt.