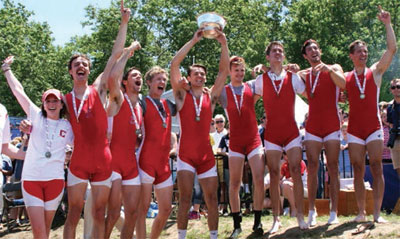 BEST IN CREW The men’s lightweight rowing team closed out its 11th undefeated season in dramatic style, as the varsity eight edged Harvard by 0.54 seconds to win its first Intercollegiate Rowing Association title since 2008. It’s the first time Cornell has been the undefeated IRA champion since 1992. Earlier, the Big Red posted top three finishes in the varsity eight, second varsity eight, and freshmen eight races at the Eastern Sprints to take home the Ivy Cup, Joseph Wright Trophy, and Jope Cup.

TOPS AT HEPS Led by an MVP performance from Max Hairston ’16, the men’s track and field team won the Outdoor Heps after three straight second-place finishes. The Big Red edged Princeton by 6-2/3 points, the closest finish since Cornell beat the Tigers by 3 points in 2003. Hairston was named the top track performer after posting three event wins, sweeping the 110- and 400-meter hurdles and leading off the 4×400 relay. Other Cornell champions were Larry Gibson ’16 in the 200 meters, Stephen Mozia ’15 in the shot put, and the 4×100 relay team. The women’s team finished third behind first-place finishes from Rachel Sorna ’14 in the steeplechase, Zena Kolliesuah ’15 in the 400, and the 4×100 relay team.

BOSTON STRONG A pair of Cornell alumni placed in the top 60 of the 2014 Boston Marathon, and each had the best finish for a resident of his state. Chip O’Hara ’03 of New York was 50th overall with a time of 2:24:35, while Graham Peck, ME ’12, of Maryland was 59th overall in 2:26:36. Two days before the Marathon, Morgan Uceny ’07 won the Boston Athletic Association Invitational mile race with a time of 4:44.0, becoming the first runner, male or female, to win the event three times. 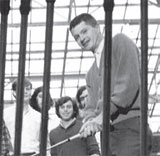 R.I.P. COACH Longtime Cornell golf coach Jim Fenner ’53 died in Ithaca on May 1. Fenner, who served as head coach from 1973 to 1989 after many years as an assistant, was also the club professional at the Robert Trent Jones Golf Course. In 1980, he led the Big Red to a second-place finish in the Ivy championships and fifth in the ECACs.

TOP HONOR Phillips Academy in Andover, Massachusetts, recently renamed its softball field in honor of Peter Drench ’70, who has coached the softball squad for 26 seasons. Although Drench is retiring as a history teacher at the school, he plans to keep coaching. He has already racked up more than 300 wins at Andover, along with many tournament titles including Big East Prep Invitational crowns in 2011, 2012, and 2013. 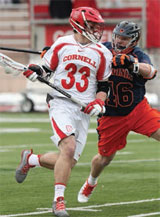 ALL-AMERICAN Lacrosse standout Connor Buczek ’15 earned first-team All-America honors and was named the Ivy League Player of the Year after helping lead the Big Red men’s team to an 11-5 season and the squad’s tenth NCAA berth in the last 11 years. Buczek was a Tewaaraton Award nominee after scoring 30 goals with 17 assists from his midfield position.

TURNING PRO Although quarterback Jeff Mathews ’14 went undrafted after rewriting the Cornell and Ivy League record books as a passer, he didn’t have to wait long to sign an NFL contract. Mathews inked a free-agent deal with the Atlanta Falcons shortly after the draft ended. He received positive reviews from the media following the team’s rookie minicamp in May and will try to earn a spot on the roster when preseason training camp begins in July.

SCHOLAR-ATHLETES Big Red teams showed their ability in the classroom this year, with ten squads earning commendations from the NCAA for posting Academic Progress Rate scores in the top 10 percent of their sport. Eight of those teams—baseball, men’s and women’s basketball, field hockey, men’s golf, women’s gymnastics, women’s lacrosse, and volleyball—all finished with perfect scores of 1,000. Cornell’s overall average was 989.9 for its 28 teams.