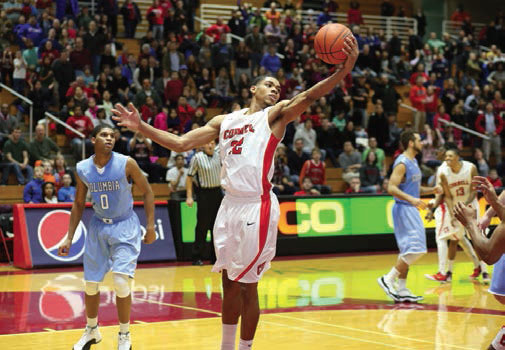 Shonn Miller ’15 (above) closed out his Cornell career in impressive style, earning first-team All-Ivy honors and being named a finalist for national Defensive Player of the Year. Miller averaged 16.8 points and 8.5 rebounds per game to become only the fifth Big Red player to earn multiple first-team all-league honors. Miller missed his junior season because of an injury and will use that year of eligibility to play for the University of Connecticut as a grad student next season, which is allowed under NCAA (but not Ivy League) rules.

After reaching as high as third in the national rankings, Danielle Letourneau ’15 (left) finished her college career as only the second Cornell player to earn first-team All-American honors for four straight seasons. She went 12-4 for the season and reached the quarterfinals of the College Squash Association Individual Championship for the third straight year. Aditya Jagtap ’15 (right) earned first-team All-American honors as well, reaching the CSA quarterfinals and placing sixth in the final season rankings after posting a 14-2 record for the men’s team.

The women’s team won its 14th national title in April, scoring in the last 10 seconds to beat Virginia 17-16 in the U.S. Polo Association’s National Intercollegiate Championship game. Anna Winslow ’16 led the Big Red with five goals while Devin Cox ’16 scored four. The women’s last national title came in 2011. The men’s team lost to Texas A&M in a shoot-out in the national semifinals and finished 15-4 overall.

Victoria Wines ’17 (above) posted Cornell’s best finish ever at the NCAA Fencing Championships, placing third in the epée. Wines went 17-6 in round robin competition to tie for first, then lost in the semifinals 15-11. She’s the University’s first All-American since Meghan Phair ’06 was fourth at the NCAA tournament in 2004. Big Red fencers have seven individual national titles to their credit, but they all came in the National Intercollegiate Women’s Fencing Association (NIWFA) Championships.

For the first time in program history, the team had two players earn All-Ivy honors—and they’re brothers. Luke Graboyes ’17 and Mike Graboyes ’18 finished in a tie for seventh place at the Ivy Championships. They both posted their best score in the final round of the three-day event, with Luke shooting a one-over-par 73 and Mike carding a 74.

After two years as an assistant coach for the Colorado College men’s team, Scott Palguta ’05 has been named head coach of the top-20 Division III program. Palguta played professionally for seven seasons and helped the Colorado Rapids to the MLS Cup in 2010.

The end of the college season usually means the beginning of professional careers for a few Big Red players—and this year was no exception. Cole Bardreau ’15 signed an entry-level contract with the Philadelphia Flyers and joined the team’s AHL squad in Lehigh Valley, where he scored one goal with one assist in 15 games. Joakim Ryan ’15 signed with the San Jose Sharks, who’d tabbed him with their seventh-round pick in the 2012 draft. Ryan reported to the Sharks’ AHL team in Worcester, where he had two assists in seven games. Jacob MacDonald ’15 was the other player to go pro, signing with the Elmira Jackals of the ECHL, where he had a goal and two assists in eight games.

Big Red coach Doug Derraugh ’91 guided the Canadian team to a silver medal at the IIHF World Championships in April, thanks in part to the efforts of six former Big Red players. Rebecca Johnston ’11, BS Ag ’12, had two goals and three assists for the Canadians while Brianne Jenner ’15 had a goal and two assists while leading all players in the tournament with 68 faceoff wins. Laura Fortino ’13 and Jillian Saulnier ’15 each collected one point for Canada while Lauriane Rougeau ’13 and Jessica Campbell ’14 played in all five games but did not score.

The end of the 2015 season marked the end of an era for two Big Red teams. Dick Blood wound up his tenure as softball coach with 623 victories in 20 years, the most wins in one sport by any Cornell coach. And Joe Lucia stepped down as head coach of the swimming program after 28 years with the men’s team and 15 with the women’s. He will remain as a volunteer coach in charge of alumni relations and fundraising; former associate head coaches Patrick Gallagher and Wes Newman ’09 will become head coaches of the women’s and men’s teams, respectively.