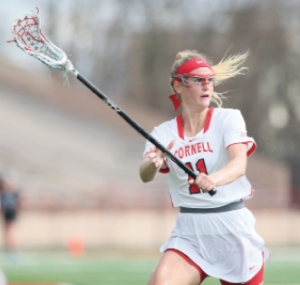 WOMEN’S LACROSSE For the first time in program history, the Big Red has won NCAA tournament games in back-to-back seasons. Cornell scored a 12-7 win over Notre Dame in the first round of the 2017 playoffs before losing to Princeton in the second round. Cornell also fell to the Tigers in the Ivy League title game after sharing a regular season championship (in a three-way tie with Princeton and Penn), posting a 6-1 league record. Catie Smith ’17 (right) was named the league’s defender of the year and was joined on the All-Ivy first team by teammates Amie Dickson ’17 and Kristy Gilbert ’17. Jenny Graap ’86 earned Ivy coach of the year honors for the first time.

MEN’S TENNIS Cornell posted its first NCAA tournament win, beating Rice University 4-0 in the first round of regional competition before losing to host Baylor in the second. The Big Red claimed the one point available in doubles play against Rice, winning two of the three doubles matches, then reeled off straight-set wins at third, fourth, and fifth singles to clinch the match as the remaining singles contests were left unfinished. Earlier in the season, Cornell claimed its second Ivy title, beating Brown 4-3 in the regular season finale. Colin Sinclair ’17, Chris Vrabel ’17, and Lev Kazakov ’20 earned first-team All-Ivy honors, and Silviu Tanasoiu was named Ivy coach of the year; Cornell set a program record of 21 wins during the regular season, including a 4-3 road victory over then 10th-ranked Oklahoma in March. 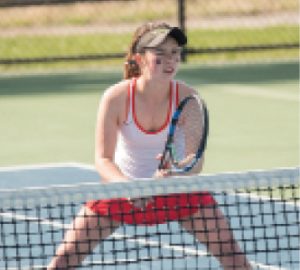 WOMEN’S TENNIS Powered by Marika Cusick ’17 (right), Cornell earned its first league championship, going 5-2 to share first place with Dartmouth and Penn while matching a program record with 15 wins against six losses overall. Cusick went 13-5 to become Cornell’s first Ivy player of the year since Olga Itskhoki Harvey ’96 in 1995 and 1996. Mike Stevens was named Ivy coach of the year; he’s the program’s winningest coach, with a 78-58 record over seven seasons.

MEN’S GOLF Mike Graboyes ’18 won the individual title at the Ivy championship, leading the Big Red to a second-place finish—matching its best team placing from 1980 and 2005. Graboyes led from beginning to end, carding a three-day total of 214 (two under par) to win by three strokes. He’s only the third Cornell golfer to win the Ivy tournament, joining brother Luke Graboyes ’17 (who won in 2016) and Jim Bird ’86 (in 1986). 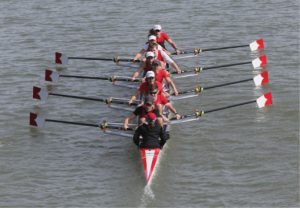 ROWING The men’s lightweight crew team (right) was unbeaten in 2017, marking the program’s 14th perfect cup season. All boats easily outdistanced Dartmouth in the regular season finale, with the second varsity eight boat winning by 11 seconds in the day’s closest finish. Meanwhile, three members of the men’s heavyweight crew—Ilia Savin ’17, Finn Putnam ’18, and Raymond Weeks ’19—were named to the U.S. national team selection camp, making them contenders for the World Rowing Under-23 Championships in Bulgaria.

MEN’S LACROSSE No first-year student in the long and celebrated history of Cornell lacrosse has enjoyed a better freshman season than Jeff Teat ’20. After collecting five goals and seven assists in an 18-17 win over Princeton in the season finale, Teat finished his rookie campaign with a school freshman record of 72 points (33 goals, 39 assists) breaking the previous record of 67 set by Rob Pannell ’12, BS ’13, in 2009. His 12 points in the Princeton game were two short of the school record and the most by a Big Red player in a single game since Tim Goldstein ’88 scored 12 in 1987.

WOMEN’S HOCKEY Paula Voorheis ’17 won the Sarah Devens Award, given by ECAC Hockey and Hockey East to a player who demonstrates leadership and commitment both on and off the ice. Voorheis posted career bests in save percentage (.944) and goals against average (1.59) this past season and became only the second goaltender in program history to surpass 2,000 career saves.

WOMEN’S GYMNASTICS Kaitlin Green ’19 won individual titles in the balance beam and uneven bars at the USA Gymnastics Collegiate Championships, becoming the seventh Big Red gymnast to claim a national title and the first to do so in multiple events. Green won both with school record scores of 9.900. During the team event the night before, Cornell finished fourth overall with a team record score of 194.950. It was the fifth time during the season that the Big Red set a new team scoring record.