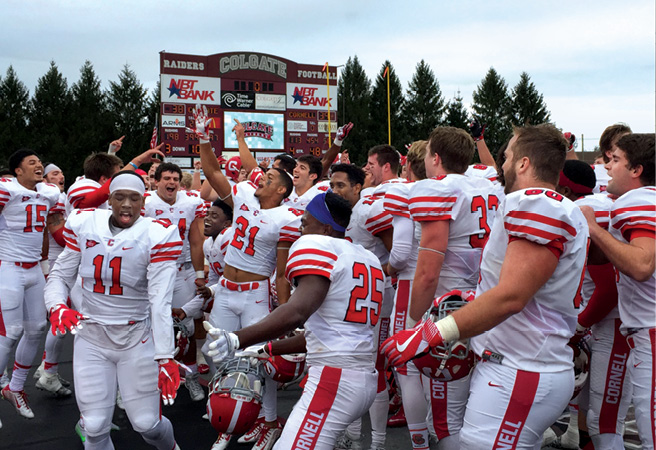 Big Win: The football team celebrates its victory over Colegate.

On October 1, the team did something it hadn’t achieved in more than 60 years: beat a nationally ranked opponent on the road. The dramatic 39-38 victory at Colgate (ranked 25th) was Cornell’s first such win since beating then-13th-ranked Penn 13-6 at Franklin Field in 1950. The Big Red trailed the Red Raiders 38-19 late in the third quarter before reeling off three unanswered touchdowns, including the game winner, a 19-yard pass from Dalton Banks ’19 to Collin Shaw ’17 with 28 seconds to play. The winning drive was set up by a fourth-down defensive stop by linebacker Kurt Frimel ’18 with 90 seconds left.

Cornell was well represented at October’s North American Cup event in Detroit—with a current student, a member of the Big Red coaching staff, and an alum all posting impressive finishes in the foil competition. New assistant coach Nicole Ross led the way, earning her first Division I gold medal at a national tournament. Victoria Wines ’17 was 18th out of 148 competitors, losing one bout in pool competition, and April Whitney ’14 was 19th. 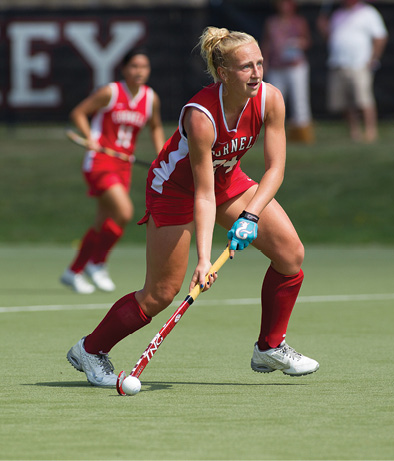 Co-captain Katy Weeks ’17 finished her career with a host of laurels, becoming the seventh four-time All-Ivy selection in program history and earning an invitation to the National Field Hockey Coaches Association Division I Senior Game. A first-team All-Ivy pick, Weeks started all 67 games of her Cornell career and finished sixth in career assists. She was joined on the first team by Sam McILwrick ’18, who backstopped a Cornell defense that allowed just 6.0 shots on goal per game and helped the Big Red to third place in the Ivy League, its fourth straight conference finish in the top three.

The men’s team won its own invitational in September, its first full-field tournament win in nine seasons. Luke Graboyes ’17 was second in the individual standings, shooting an even-par total of 290 for the three days, including a two-under-par 69 in the final round. The team total of 27 over par was four shots better than runner-up Colgate.

Chris Vrabel ’17 won the USTA/ITA Northeast Regional, Cornell’s first singles victory since the tournament was aligned into 12 regions in 2009. Vrabel didn’t lose a set in his six match wins, which pushed his fall record to 11-2. In 2013, Vrabel teamed with Sam Fleck ’15 to take the Northeast Regional doubles title.

Distance runner Taylor Knibb ’20 won the International Triathlon Union Junior World Championship, held in Cozumel, Mexico, in September. Knibb, who finished second in last year’s race, was 30 seconds behind the leader after the 750-meter swim, but beat the field by 34 seconds in the 20-kilometer bike portion and maintained her lead throughout the five kilometer run to win by 36 seconds with a time of 59:05. Kyleigh Spearing ’20 passed 20 competitors during the 5K run to finish ninth with a time of 1:00:16.

Former Big Red All-American Max Seibald ’09 has co-authored The ABCs of Boys’ Lacrosse, a children’s book designed to introduce kids to the sport. Published in September by Mascot Books, it offers an alphabetical tour of terms relating to lacrosse; for example, “S” is for “sportsmanship,” “shoulder pads,” and the “shaft” of the stick.

Although hip surgery forced her to the sidelines, Michelle Sonnenfeld Verhave ’80 helped U.S. Fencing to its most successful Veteran World Championships, serving as team captain and head of delegation for the squad of 40-and-older fencers that won a record 20 medals, including four gold, over seven days in Stralsund, Germany, in October. Verhave competed in the 2015 event in France, helping the women’s foil team win a gold.

Cornell will now have one of the sport’s top players in its corner with the naming of two-time world champion David Palmer as head coach. Just one of seven players to win multiple world titles (2002, 2006), Palmer won 27 World Pro tour events and had two stints atop the world professional rankings, in 2001 and 2006. He was named Australia’s Senior Athlete of the Year four times and selected by his squash peers as the Player of the Decade in 2010.