Still in the game

As a sophomore, Ken Dryden ’69 was the goalie on the Big Red’s first NCAA championship team.

Shortly before he retired from professional hockey at the age of thirty-one, Ken Dryden ’69 began work on The Game. A memoir of his final season with the NHL’s Montreal Canadiens, the book was published in 1983. It ranged far beyond the rink to consider culture, politics, family life, and more. At the time, The Game was hailed as one of the finest sports books ever written and perhaps the best book about hockey.

Last fall, a thirtieth-anniversary edition was published, and the raves began again. (“It remains as much a revelation on a second reading as it was on the first,” wrote Jeff Klein in the New York Times.) The new version has an introduction by sportswriter Bill Simmons and an afterword from Dryden about a memorable day he spent traveling with the Stanley Cup on a journey through his family’s history.

A native of Hamilton, Ontario, Dryden was a history major on the Hill. Always thoughtful, he speaks at length about the importance of what he learned at Cornell—especially from Professor Walter LaFeber. “It wasn’t until I took his diplomatic history course that I started to realize that history wasn’t just names and dates and battles,” says Dryden. “That it really was a story, and that it was the story of people. Then it started to make sense. . . . There was a flow to it, there was movement, there was connection.” That narrative sense of history permeates The Game, with Dryden’s sharply drawn portraits of his teammates and coach, and his vivid accounts of games, including the tense contests between NHL players and the Soviet national team in the Seventies.

Dryden had one of the greatest careers of any college hockey player. He became the Big Red’s starting goaltender as a sophomore (freshmen were not allowed to play varsity in those days), and the team went 27-1-1, clinching the NCAA championship in a 4-1 win over Boston University. The seniors on that team, says Dryden, raised the level of Cornell hockey. “The Ferguson brothers, Mike Doran, Harry Orr, Paul Althouse, Murray Deathe—they were the pivotal ones,” he recalls. “They were good enough to win, and they were competitive enough and hard-nosed enough to win. For those of us who came in after them, that standard was set.” Cornell just missed adding more championships in Dryden’s junior and senior years—losing the NCAA semifinal in 1968 and the final in 1969—but he ended his collegiate career with 76 victories and a save percentage of .939. Both are still school records.

Although college players were not highly regarded as professional prospects at that time, Dryden was drafted by the Boston Bruins, who traded his rights to Montreal. After a stint in the minors, he was called up near the end of the 1970–71 season and became the Canadiens starter. They swept through the playoffs, winning the Stanley Cup; Dryden was awarded the Conn Smythe Trophy as the most valuable player. The following year, he was named the NHL’s rookie of the year—giving him the distinction of being the only player ever to be the playoff MVP before being honored as the top rookie.

Dryden would go on to win five more Stanley Cups with the Canadiens, along with numerous individual honors. He was inducted into the Hockey Hall of Fame in 1983. For many athletes, that would be the end of a storied career—but Dryden was just getting started. He continued to write books, to work as a TV commentator (he was the color man for the “Miracle on Ice” game in 1980), and to serve as an NHL executive. He was elected to Canada’s Parliament in 2004 and held office until 2011, including a cabinet position as the minister of social development.

Dryden is now focused on education. At McGill University, where he earned his law degree in 1974, he has been teaching a Canadian studies course called Making the Future. “Canadians have a history of working with others, of being listeners, of being compromisers, of being tolerant,” he explains. “All of those qualities, in a previous time, may have made Canada fairly irrelevant to the functioning of the world. But now all of those qualities are essential to the working of a global world. We need to understand that about ourselves.”

This year, Dryden’s course is being offered at both McGill and the University of Calgary. He will lecture at one while real-time video is shown at the other, going back and forth between the campuses. Dryden hopes to expand the course to more schools across the country as Canada approaches its sesquicentennial in 2017. “Our 150th birthday is a milestone opportunity,” he says, “where we all stop, look around, see where we are, see where we’ve been, see where we’re going—and see if that’s where we want to go.” 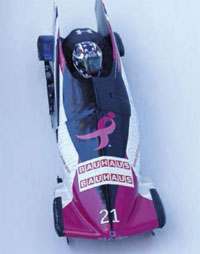 LONG TOSS When Stephen Mozia ’15 heaved the shot 20.52 meters (67 feet, 4 inches) at Barton Hall in January, the effects were felt in a record book halfway around the world. Mozia’s throw not only set school and Barton Hall records, it set the Nigerian national record. Although Mozia is from Hackensack, New Jersey, his parents are from Nigeria, giving him dual citizenship and making him eligible to hold Nigerian records. 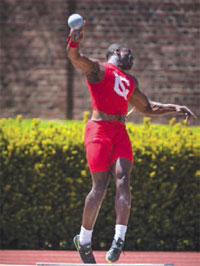 NET GAIN January was an eventful month for former Big Red hockey goaltender Ben Scrivens ’10. On January 15, he was traded from the Los Angeles Kings to his hometown Edmonton Oilers. Then, on January 29, Scrivens set an NHL record for most saves in a regular-season shutout when he stopped 59 shots during a 3-0 win over the San Jose Sharks.

RING BEARER On February 2, Bryan Walters ’10 became the third Cornell football player to be on a Super Bowl championship team when his Seattle Seahawks crushed the Denver Broncos, 43-8. Walters was on the team’s 53-man roster, although he was not part of the 46-man active roster on game day. A native of the Seattle area, Walters played in six regular-season and two playoff games as a receiver for the Seahawks.

SCHOLAR-ATHLETES Two members of the women’s track and field team, Samantha Olyha ’14 and Emily Shearer ’14, received prestigious Marshall Scholarships to continue their postgraduate schooling at an English university of their choosing. Shearer, who will split her time between Oxford and Cambridge, is a distance runner and earned All-Ivy honors in cross country last fall. Olyha has competed in multiple events and will pursue a degree in oncology at Oxford.