WOMEN’S HOCKEY Willow Slobodzian ’21 took time away from her Big Red season to represent Canada at the International Ice Hockey Federation Under-18 Women’s World Championship in Russia. A defenseman, Slobodzian had a goal in Canada’s 3-1 quarterfinal win over the Czech Republic, but her team lost to the U.S. in the semifinals.

WRESTLING In his first appearance at the Cliff Keen Las Vegas Invitational, Yianni Diakomihalis ’21 took the title at 141 pounds with four straight victories. His toughest match came in the semifinals where he won with 22 seconds left before cruising to an 8-2 win in the final. It’s the tenth consecutive season that Cornell—which finished eighth as a team—has had an individual champion at the event.

WOMEN’S GYMNASTICS Morgan Chall ’19, who helped the Big Red to an ECAC title as a freshman, has been appointed to a two-year term as the Ivy League representative to the NCAA Division I Student-Athlete Advisory Committee (SAAC). Designed to give student athletes a voice in the NCAA governance structure, the group suggests and reviews NCAA legislation. Chall is co-president of Cornell’s SAAC. 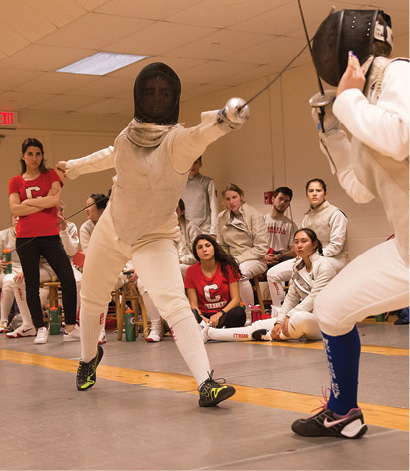 WOMEN’S FENCING The foil squad collected a silver medal at the January North American Cup tournament in Virginia Beach, Virginia. The trio of Marissa Viqueira ’21, Luby Kiriakidi ’18, and Grace Ding ’21 beat Richmond Fencing Club 45-31 in the first round before rallying late to down San Francisco Fencers’ Club 34-33 in the semifinals. (Fencing Institute of Texas took the title match from Cornell 37-33.) Viqueira was Cornell’s top individual finisher, with 36th place in Division I.

FOOTBALL The College Sports Information Directors of America (CoSIDA) has named defensive end Seth Hope ’18 to the 2017 Academic All-American team. A two-year starter, Hope had a pair of sacks last fall, when Cornell posted its most sacks in a season since 2000.

BASKETBALL Rhonda Anderson ’83 and Ryan Wittman ’10 have been named Legends of Ivy League Basketball, to be honored during the semifinals of the Ivy men’s and women’s tournament in March. Anderson—who remains among the top five career leaders in scoring (13.8 points per game) and rebounds (9.5) for the Big Red women’s team—is executive vice president and COO of the YMCA of Greater Charlotte; she was named the Daily Sun’s athlete of the year for 1982–83, the first female athlete to receive the award. Wittman, one of only five Ivy players to surpass 2,000 career points, led the Big Red to three consecutive league titles as well as a trip to the NCAA Sweet 16 in 2010. After playing professionally in Europe and the NBA Development League, he is now an associate with Brook Venture Partners in Boston.

FOOTBALL Ricky Rahne ’02 has been named offensive coordinator for Penn State. Rahne has been an assistant with the Nittany Lions for the past four seasons, coaching quarterbacks and tight ends. He previously served as quarterbacks coach at Vanderbilt under current Penn State head coach James Franklin. A three-year starter at quarterback and honorable mention All-American on the Hill, Rahne has also held assistant coaching positions at Kansas State, Holy Cross, and Cornell. Another former CU quarterback, Bill Lazor ’94, was officially named offensive coordinator for the Cincinnati Bengals in January after getting the job on an interim basis during the 2017 season.

MEN’S HOCKEY Goalie Andy Iles ’14 is having success playing professionally in Europe. A member of Scotland’s Fife Flyers, he was named the Elite Ice League Player of the Week for December 17 after leading the team to a pair of wins, including a 43-save performance in a 3-1 victory over Sheffield. At the season’s midway point, Iles ranked second in the league in wins and third in goals-against average and save percentage.